The Oyster Festival Fence Has Been Adjusted »

Will the North Coast Marine Protected Areas Spark a War With Oregon?

Everyone knows that the North Coast’s implementation of California’s Marine Life Protection Act has been fraught with turmoil and hard feelings. But probably not too many people knew that it could conceivably lead to a border war with our neighbors to the north. 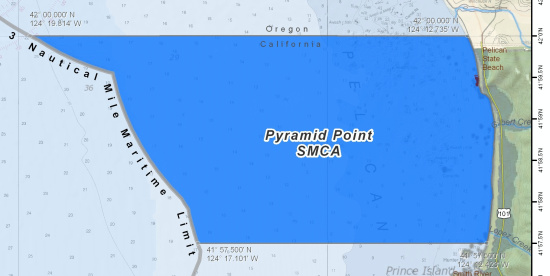 It all seems straight, doesn’t it? The California-Oregon line is clearly demarcated right there at the 42nd parallel. True as can be.

What you don’t see in this map, because it’s zoomed out too far, is the actual border between California and Oregon. Let’s zoom in a little bit and highlight the original bit of map the MLPA remappers chose to ignore:

That dashed line is the actual California-Oregon border, which, at the coast, lies just south of the 42nd parallel. The difference is not insignificant — the state of California is extending its jurisdiction over thousands of acres of ocean which don’t technically belong to it. Or which arguably don’t belong to it, anyway. If Oregon cares to protest — and why wouldn’t it, considering that California wants to place a decent chuck of its fishing grounds off-limits? — there could be a pretty interesting fight afoot. And it might encompass a good deal more than fishing rights.

The history of the California-Oregon border is a strange one, it turns out. It all goes back to 1819, when the United States and Spain (later Mexico) entered to a treaty to end a beef and finally demarcate their borders. The U.S. got Florida, some of Texas. Out west, Spain got everything beneath the 42nd parallel.

But no one thought to actually survey the line until after the Mexican-American War was all said and done. In 1849, the boundaries of the new state of California were laid out in Article 12 of the first California Constitution — which, full disclosure, my uncle Jose Antonio Carrillo signed off on. The northern boundary of the new state followed the old U.S.-Spain treaty line. And there it sits to this day — Article III, Section 2. Apparently it’s still state policy. The Department of Fish and Wildlife explicitly claims suzerainty on its website.

But in 1867, years after Uncle Jose and his drinking buddies laid down the law with the Bear Flag punks who had kicked their asses, someone decided that the line needed to be finally laid down on the land. That someone hired a colossal fuckup and likely drunk named Daniel G. Major to do the work. And the line this man Major surveyed wandered all over the goddamn place from north to south. In human terms, it looks like the line you walk to the bathroom after downing several bottles of champagne (which Major almost certainly did). For comparison’s sake, the line that Mason and Dixon surveyed 100 years earlier was never off by more than a couple of hundred feet.

(Incidentally, Major’s California-Oregon line also abruptly ended two miles early, which over a century later led to a border flare-up between California and Nevada that went all the way to the Supreme Court. California, which wanted the land Major had stole from it, was basically told to pound sand — a sign of things to come, most likely. Unsurprisingly, Major also blew big chunks on the Idaho-Utah border.)

So everyone has known for many years that the de facto line between Oregon and California has been off, even if, for California at least, it remains de jure at the 42nd parallel. Newspapers periodically run “News of the Weird”-type stories datelined New Pine Creek, Oregon — a town that would belong to California, were Daniel G. Major not so incompetent. This Los Angeles Times piece, from 2005, is typical.

And that story also mentions some of the larger issues at play, were a border war to flare up (as it did with Nevada years ago). We’re not just talking about DFW patrol boats stopping Oregon trawlers from taking salmon in disputed waters; we’re also talking about mineral rights underneath those waters, as well as a shift in property tax revenues all along the border.

Want to see Major’s crap work for yourself? Here’s a handy link of a Google map overlaid with graticules. Check it out — if California had its way, we’d get not only the Pyramid Point MPA, not only the offshore gas leases (if any), not only New Pine Creek, but Oregon’s Goose Lake Recreation Area.