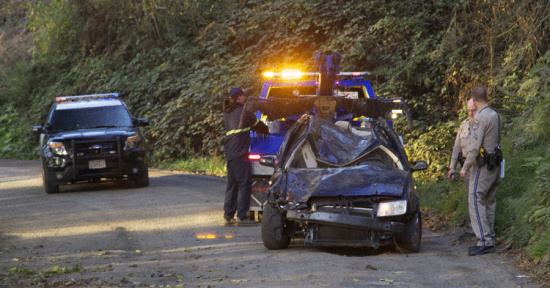 (Photo of the vehicle provided by Martin Swett. Story updated 11/29)

On November 27, 2013, at approximately 3:10 PM, Miranda Ann Costa of Trinidad, CA was driving her 2003 Volkswagen northbound on Scenic Drive north of Westhaven Drive.  Her child, Malachai Costa (age 2), was in the right front passenger seat.  For reasons still under investigation, Ms. Costa made an unsafe turning movement, left the roadway, and struck a tree.  The roof of the vehicle sustained major damage due to the collision.  No other vehicles were involved.  Neither Ms. Costa nor the child were restrained at the time of the collision.  Ms. Costa had to be extricated from the vehicle.  Both occupants were transported to Mad River Community Hospital by ambulances.  Ms. Costa sustained major injuries during the collision.  Malachai Costa sustained minor injuries.  Ms. Costa was subsequently arrested for felony driving under the influence of alcohol and / or drugs and causing injury to another person, felony child endangerment, felony probation violation, and misdemeanor driving on a suspended license as a result of a previous DUI activity.