Sorbonne and the Lion: A Whitethorn Mountain Lion Attack 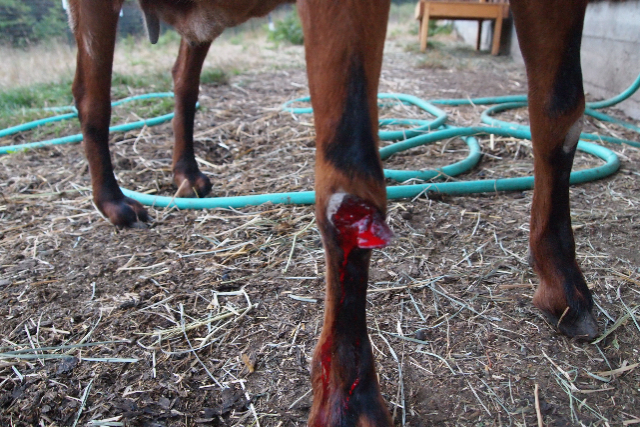 On monday evening August 26th our goat, Sorbonne, was attacked by a mountain lion while I was sitting at her side. I posted some of the details on facebook that evening, below is the full story:

I had spent the day in Eureka running errands. Driving home I checked in with my wife, Lela, who told me she was heading out to a retirement party for a beloved teacher in the nearby community of Whale Gulch and would be home later that evening. She asked that I take our dairy herd out for an evening browse when I got home since she would be closing them up in the barn early and they’d be hungry for forage by evening.

I pulled in a little after 6pm, heated up some dinner and made it out to the barn by 7pm. We have a herd of sixteen Nubian dairy goats, though in truth, nine of the sixteen are wethers (neutered males) that were born here and we can’t seem to part with. Of the seven does, only three are in milk. We’re not exactly an efficient dairy farm but we enjoy knowing where our food comes from, love our animals and find keeping goats captivating on many levels. The herd was happy to get out of the barn and eagerly followed me past the pond and up the looping road that transects the hill behind our house. Lela and I have a couple of folding chairs set out on the edge of the road there, where we can sit and watch over the herd while they browse on the gentle slope below and also have a nice view of the Whitethorn valley in the distance. Often I bring something to read when I’m out with the herd alone and on his particular evening I remember being a little bummed that I left my Sun magazine, which had a story I was halfway through, on the kitchen table.

Even in the fading daylight the evening was mild, I was still in the clothes I’d worn to Eureka: shorts, long sleeve tee shirt, sneakers. After about fifteen minutes I got out of the chair and sat on the ground alongside of Sorbonne, who stood grazing nearby. Sorbonne is interesting that way. On foraging walks, all of the other goats fan out in family groups or makeshift alliances and drift off to browse the weeds, grass and brush, keeping an eye out to make sure we’re still in sight but pretty much focused on finding food. Sorbonne is different, she is very human centric and rarely ventures very far from our side. A bit of a nervous nelly she can be endearingly neurotic, like when she stands in the barnyard and stares at the house for hours waiting for any sign of us. She’s absolutely dog-like in her devotion to Lela and myself – affectionate, with lots of eye contact and as sweet as they come in cloven hooves - we adore her.

A few years back Sorbonne was the herd queen but was overthrown by our other elder matriarch, her peer, Alona, in a multi-day epic battle of wills and head-butting. Since then her place and her progeny’s status in the herd has diminished. With the exception of her tough-as-nails grand daughter, Pearl, who will go head to head with anyone, her offspring now defer to Alona’s across the board. But to us Sorbonne remains a favorite and that evening I settled on the ground next to her and leaned the back of my head into her side, scratching her brisket mindlessly while listening to her methodically pulled up, chew and swallow patches of weedy grass. The rest of the herd was fanned out downslope in the gathering dusk doing the same.

At one hundred and eighty pounds Sorbonne took the weight of my head and shoulders with ease and as I leaned into her left side, she was as cozy as a favorite chair. A few minutes passed, my mind god knows where, when suddenly I felt her get hit hard from behind. My immediate thought was that another goat had given her a whack and I turned, annoyed, to she who had hit her. What I saw instead was Sorbonne down on her knees a couple of feet from me and a mountain lion who must have slid right over top of her, circling back for the kill, its four foot long, hundred pound plus body moving snakelike, fluid and muscular. As my mind struggled to process what was happening, the herd took off running back towards the barn. Sorbonne was up and running too, but cut off from the herd, she chose to head downhill. Before I could even sense whether or not I was in danger, the lion was on Sorbonne again, pulling her down twenty-five feet away from where it had initially attacked. All of this happened soundlessly. Not a peep out of Sorbonne, the lion, or the herd. They all seemed to understand the gravity of the moment and had no need to expend energy on fruitless noise making. I was on my feet and yelling at top volume.

In the past I’ve had a certain confidence in the power of my voice. As a cyclist who spends lots of time on rural roads I’ve had to yell at menacing dogs fairly often. In spite of my unimposing size I discovered I can shout with an authority that will stop a charging dog in its tracks. I tried that technique now with the lion on top of Sorbonne an easy stone’s throw away. The lion didn’t even bother to look my way. It was focused like a laser on the business of killing and Sorbonne was flailing. In rapidly escalating desperation and outrage at what was unfolding in front of me, I grabbed the chair I’d been sitting on earlier and ran toward them. I envisioning getting a good hit on the lion with the metal framed chair figuring it would be enough to shock it into running off in search of easier prey. Now Sorbonne was up and running again, I raised the chair over my head as I pursued the two of them down the hill toward the driveway and thick brush beyond, yelling the whole time.

What happened next was like a scene out of a recurring nightmare, as I was running full speed down the hill in pursuit, the chair slipped right out of my hands stretched high overhead. When it landed it was ten feet or more behind me. Two quick thoughts flashed through my mind: 1) “no time to go back and retrieve the chair” and 2) “is it foolish to continue barehanded.” The first thought was more a statement of fact, that lion was all business and every passing second was damage to Sorbonne. The second thought was really a question, left hanging in the air, unanswered, even now. As I crested the eight foot slope leading to the driveway, I saw Sorbonne down yet again and pulling herself up one last time. In desperation she crossed the driveway and plunged into the wall of brush ahead of her with the lion’s paws clutching her sides. She was trapped.

Looking back, I can see now that what happened in the next few seconds of this drama determined the outcome for all of us. Sorbonne crashed headlong into the brush and was quickly stopped by the dense mix of dead cascara trunks, manzanita and whitethorn. I was descending the slope, closing in at full speed, barehanded but still shouting like a banshee. For its part, the lion slipped past Sorbonne and turned to face the both of us from deeper in the brush. If the lion had stopped to face me on the driveway, I would have been defenseless except for fists and sneakers, and against that muscled bundle of tooth and claw, I’m sure I would have gotten the worst of it. But with the lion going deeper into the brush, I came to a stop just behind a cowering Sorbonne and continued to yell with the lion now seven feet away and frozen, staring intently into my eyes. I was able to grab a dead cascara trunk and shove an end in the direction of the cat. After 3 or 4 ineffectual plunges I realized the cascara trunk I was using was forked and getting caught on the screen of brush between myself and the lion. Finally, I swung it around and plunged the blunt end hard through a clearing in the tangle, right at the lion’s face. When I pulled back the trunk I saw its long tail retreating further into the brush.

Heart racing like a runaway train, I backed the few steps onto the driveway and yelled for Sorbonne. She got herself turned around and came charging out. I saw blood and ripped skin but if she felt pain she didn’t show it. As we headed back to the barn we came upon the rest of the herd waiting on high alert near the pond. As Sorbonne and I caught up with them they were off and running again toward home.

The road back from where the lion had Sorbonne pinned in the brush to the barn is only 300 yards or so but it is horseshoe shaped with the patch of brush in the center. I tried to keep the herd together but primal fear trumped my usual voice command and they spread out like a string of beads with me at the rear making a beeline for the safety of the barnyard. With a hundred yards to go I heard rustling in the brush that could only be the lion on the move. For the first time since Sorbonne got hit, I felt fear and cursed myself for not carrying the cascara trunk or grabbing a chair as we passed the pond. Barehanded and trailing a herd of panicked goats I listened to myself making loud, guttural sounds that I didn’t know I had in me but hoped would sound menacing enough to keep the lion at bay. I was never more happy to shut a gate behind me. 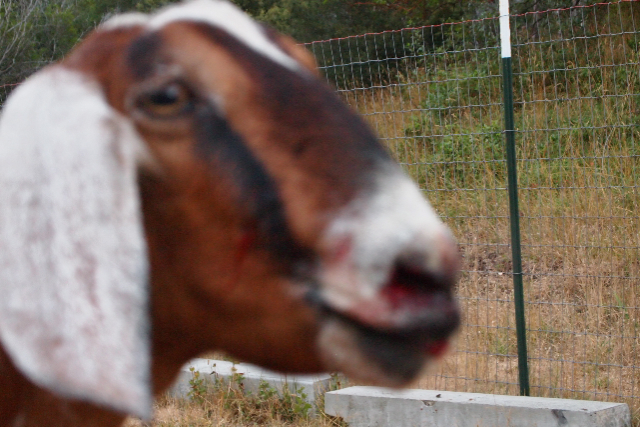 Sorbonne back in the barnyard, in shock and bleeding. 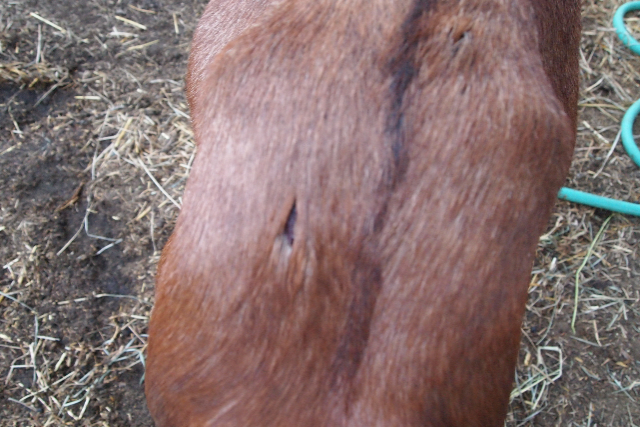 Claw marks to Sorbonne’s back. 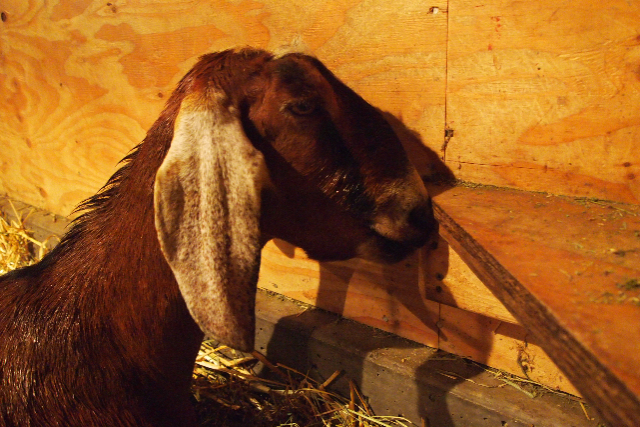 A couple hours after the attack, Shock worn off. Goats often put their face to a wall when in pain.

Four nights later a neighbor photographed a lion less than a mile from our place on the county road. She reported that it seemed unafraid of the car and they watched it for a few minutes before it finally sauntered off. From the pictures she posted and the proximity to our place, I have little doubt it’s the same animal.

Sorbonne suffered claw wounds to her rump and sides and bite wounds to her face and neck, we counted nine puncture wounds in all. But the worst wound came when the lion took her down on the driveway, she fell hard and had her right kneepad torn off completely. It’s taken daily injections of antibiotics for the first week along with regular flushing of all the wounds and twice daily knee dressing changes for three weeks but she’s doing well and back to full health now, four weeks later. She is definitely more nervous when out foraging but who can blame her.

I’ve had many dreams of mountain lions in the past month. I feel incredibly lucky to have had such an intense, personal encounter with something so wild. And, also, lucky to have escaped unharmed. 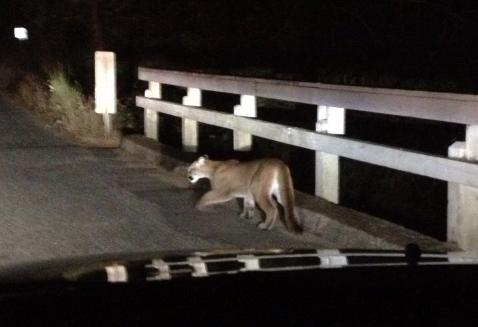 Taken by our neighbor, Kelly Sandoval, four days after the attack. This bridge is less than a mile from our place. We can’t be 100% sure it’s the same animal but judging from its size and the location, it would be very surprising if it wasn’t. 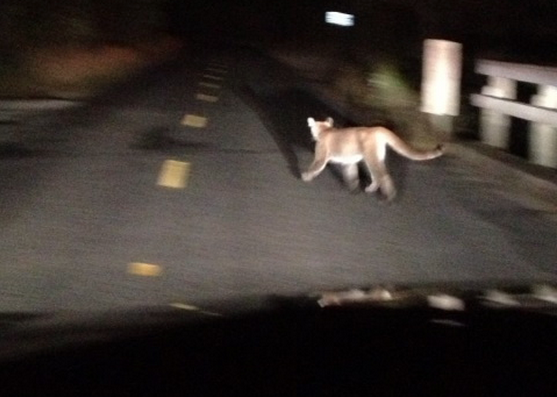