« Do You Know Where the Sheriff and CAMP Are Today? We Have the Answer

Eureka City Councilman Chet Albin officially launched his campaign to secure Eureka’s fifth ward council seat at a gathering of friends and colleagues in front of the Fisherman’s Terminal on Eureka’s C Street Market Square today. LoCO was there and grabbed some iPhone video of Albin’s brief statements, as well as his introduction provided by Eureka Mayor Frank Jager.

Albin was appointed to the council late last year to serve out the term of late councilman Lance Madsen. He will challenge already announced candidate Natalie Arroyo for the seat this November. 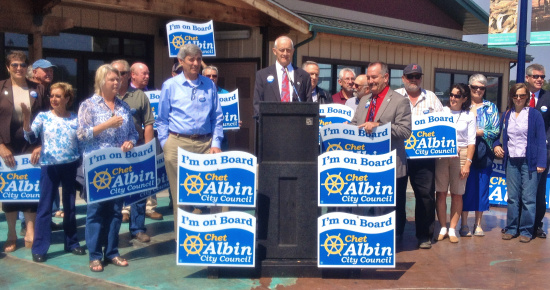