« This Year’s Shop With a Cop Event Inspired Several Other Customers to Donate, Too

DEAD RECKONING: So This is Christmas? »

LoCO ON THE POT: To Dab and Dab Not

Dab not? I understand.

Dab only on special occasions? That’s my style.

Dab exclusively? I understand that too.

You see, dear friends of OTP, after surviving the weekend at another massive Emerald Cup, I realize that I’ve undergone a total cannabis character arc with respect to dabs.

For 20 years now, my cannabis use has centered around smoking bud. It still does. Bubble hash or kief is always bonus. Sure, I smoked honey oil here and there over the years, certainly well before I ever heard the term “dab” in a cannabis context. But I never sought it out and I didn’t know that it was made with solvent, like butane. Yes, I was the quintessential ignorant end user, only concerned with getting high.

Now that I’m in my 30s and I’ve been living in Humboldt off and on for the past decade, I know a lot more about cannabis farming and processing than I ever did before. These days, I stick to smoking local outdoor organic cannabis buds. I stick to local organic food too.

“Dabs” came on my radar in the months before I began writing this column, oh, almost a couple of years ago. More and more incidents of blown up butane hash labs were making headlines and I had come to know a couple people that were all about the dabs.

I knew a guy that spent the summer of 2012 up in Oregon, “blasting tubes” at an indoor scene. He showed me a bunch of photos he took at this spot, featuring PVC pipe and lots of butane. It looked sketchy and not good. And I had a roommate in Arcata that dated an Oregonian dab dude. I tried his dabs, squashed/smeared on a bowl of bud, but I wasn’t into it.

The idea of solvents and cannabis didn’t work with my organic mindset, and I didn’t know that smearing the dabs onto the flower is not the ideal way to dab. I had yet to encounter an “oil rig.” I didn’t know that you can dab cold-water hash too, provided it has the right texture and you have the right dabbing device. I had much to learn. Still do.

In July of 2013, I started writing this LoCO - OTP column. I penned an article that debuted on July 28th called “Dabs Will Blast Ya.” It features the famous photo of the “Vansplosion” off the Arcata Plaza. Arcata Fire conjectured that the Vansplosion was related to all the butane canisters inside the van, butane that was probably for making honey oil, or dabs.

My article had a negative slant, but a negative slant on dabs is justifiable. Terrible things can happen when blasting tubes. A more recent example of bad hash manufacturing juju was the explosion last month in Rancho Sequoia. The photos are fucking crazy. And we can’t forget when a two-year-old got badly burned in a hash lab explosion in Eureka last year. Negative dab manufacturing incidents aside, it was about this time last year when one of my trusted SoHum friends hooked me up with a proper solvent-derived dab. By “proper,” I mean that the dab was made from organic cannabis and was lab-tested and proven to be virtually solvent-free. In other words, the butane was effectively purged during the production process. Plus, I hit the dab out of a proper rig. 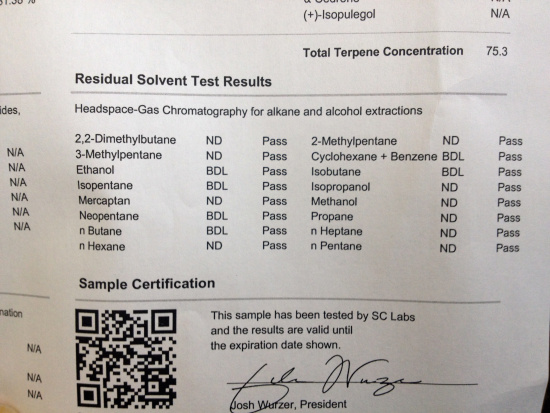 That dab blew me away. It tasted great, all hot-knife style out of the rig. It warmed me up and brought the circulation back to my cold hands. (I have Raynaud’s disease.) That solvent-derived dab tasted better and was more powerful than most of the cold-water hash I smoked during my stint as a 2013 Emerald Cup hash judge. Most of the cold-water stuff tasted like burnt baked potato compared to that light and flavorful dab. 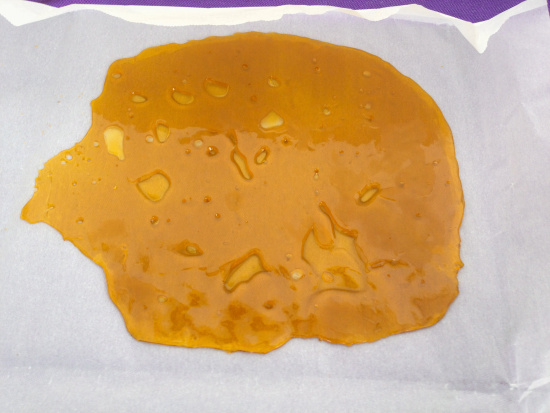 At the 2013 Emerald Cup main event, I stuck to the dabs at the VIP lounge dab bar. I got very high. On the second day, I got too high when I did a big dab through a Nectar Collector. It was game over. I was fucked up beyond. I hit the Eject button and got out of there. Smoking bud never got me that high. Dabs are different, stronger.

Then at the High Times Cup last June, I did’t even mess with flowers. I went exclusively from dab to dab. Same story with the 2014 Emerald Cup. And on day two (last Sunday), I did my first ever “clear dab.” I dabbed in moderation at both events, and it was good times. 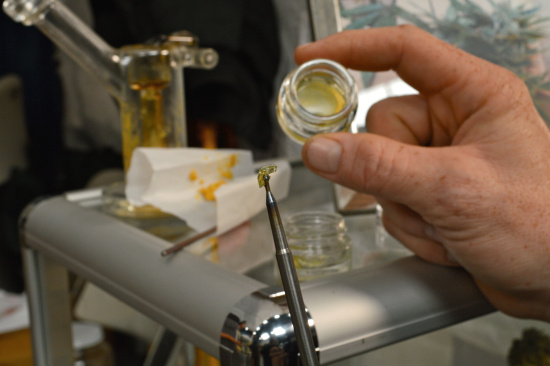 I don’t smoke dabs at home. I don’t use an e-pen. I don’t own an oil rig. I smoke joints and I use a one-hitter glass pipe. That’s it. However, now that I have some legit dabbing experience under my belt, I can say I prefer the taste of dabs to the taste of smoking flower. If dabs are available and I am in a setting where I can be extra high, I’m all about it. I dab socially and only on occasion, when the dabs are made by people I trust or by people that my professional weed friends can vouch for. I’ve come to really like dabs.

On dabbing with an oil rig: You use a torch to heat a “nail” of some sort (titanium, ceramic, quartz), or maybe you have a constantly-hot “e-nail” that’s plugged into a power source. The nail is connected to what’s basically a bubbler. You smear your dab onto the hot nail and it vaporizes the dab. You inhale the vapor via the bubbler and voila, you have dabbed. 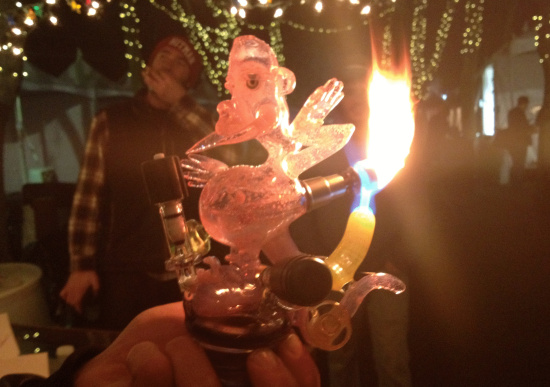 Check out this rig with a built-in torch.

The Nectar Collector is basically a long glass tube with a titanium tip. You torch the tip to heat it up, then you touch the hot tip to the dabs, vaporizing the hash as the tip makes contact. You inhale the vapor through the other end of the tube. (It’s akin to snorting coke through a straw.) There are so many different ways to make dabs, to smoke dabs and to use dabs. My rudimentary understanding is that the various processes for making dabs can be quite technical and should only be done in the proper setting with proper equipment. Skunk Pharm Research up in Oregon is all about making dabs right. Sometimes they do hands-on extraction classes. That’s what’s up.

Ideally, organizations like Skunk Pharm and legalization and more legitimacy for the cannabis industry will curb the market for sketchy dab manufacturers.