INTRODUCING: Let the Lost Coast Outpost Help You Get a Job » 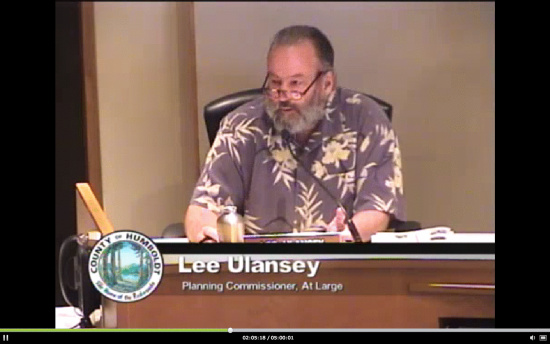 A couple days ago I said that Planning Commission meetings tend to be dead boring. That’s still true, but last night’s showdown was the rare exception as trail advocates came out en masse to protest the commission’s split decision Tuesday to eliminate the goal of a countywide trail system from the general plan’s Conservation and Open Space element.

It was a meeting that saw accusations fly in many directions, from public speakers saying the game has been rigged by developer groups to Commissioner Lee Ulansey’s assertion that trail advocates are discriminating against disabled people. Passionate frustration throughout turned the meeting into a real barn burner.

During the first 90-odd minutes more than two dozen county residents stepped to the lectern to address the commission, with the vast majority urging its members to reconsider the trail decision and show more respect for the public process that went into the previous draft version of the plan.

The first sign of tension on the commission came roughly 30 minutes in, following one such speaker. Ulansey questioned the timing of the trail advocates’ testimony and was quickly challenged by Commissioner Susan Masten:

And so the testimony continued. Susan Ornelas, an Arcata council member and chair of the Humboldt County Association of Governments, spoke on her own behalf, urging the commissioners to check out Imagine Humboldt, a forward-looking project that involved extensive community outreach and found widespread trail support.

Jessica Hall, a Eureka resident and former executive director of Humboldt Baykeeper, drew applause when she advocated for science-based decisions on wetland and stream buffers, rather than “arbitrary and capricious” votes.

Another interesting exchange with Ulansey came roughly 45 minutes into the public testimony. Lindsay Holm, an HSU student who said she can’t afford a car, had just finished advocating for better and safer trails when Ulansey called her back to the lectern and asked her to define what she meant by a “countywide trail system.” She wrapped up her response with a good zinger.

Ulansey proceeded to challenge a number of other speakers to define their vision of a countywide trail system. Below we pick up with Westhaven resident Don Allen, a trail builder and employee of the Redwood Community Action Agency, who had just voiced his frustration at having to come back yet again to address issues the community thought were already settled:

But things really started to get heated around the hour-and-a-half mark, when the commissioners argued over just how they ended up re-reviewing a chapter of the general plan update. After some tense back-and-forth between Commissioners Noah Levy, Ulansey and Masten, Chair Bob Morris tried to change the subject. But Scott Greacen dug right back in, accusing activist corporation the Humboldt Coalition for Property Rights (which was founded by Ulansey and Morris) of pulling the strings on the whole process. Take a look:

Greacen’s entire speech is worth a listen (it starts around the 1:32:00 mark in the full video), but for the sake of brevity we’re going to skip forward a bit to his impassioned close, which is followed by some heartfelt testimony by Eureka resident Robert Morris Ayers, a public meeting first-timer. His comments about “that line” refer to the deleted language supporting a countywide trail system:

After the marathon of public testimony, the commission took a short recess. When it reconvened, Morris asked staff go go over all the other places in the general plan where trails are referenced.

Then came the most remarkable speech of the evening. Ulansey started his prepared statements by chastising Humboldt County Supervisor Mark Lovelace for recent comments he’s made on Facebook. Specifically, Ulansey took umbrage at Lovelace’s assertion that the commission was eliminating trails and open space from the plan, which was indeed an overstatement.

…which he characterized as a literal call for violence (a claim that drew audible laughter from the crowd).

Finally, in something of a head-scratching turn, Ulansey revealed his heretofore unspoken reason for voting to delete the countywide trail system goal: Non-motorized trails, he argued, are inherently discriminatory against disabled people who ride four-wheelers. This was not among the issues he raised when voting to delete the trail language. On Tuesday he expressed concern over private property rights and eminent domain. But secretly, it turns out, he was just protecting the rights of our county’s ATV-riding paraplegics.

Thus it follows that Lovelace, an outspoken trail advocate, “appears to be totally biased and blind to the needs of disabled people.” And all the people who want non-motorized trails are tacitly supporting “a policy that discriminates against the needs of the less fortunate and the disabled in our community.”

Masten countered by saying that she, like members of the public, has questions about the motives and agenda of some commission members. Here’s the clip:

The commission then spent awhile debating how it would spend the remaining time currently allotted for tackling this element review. The Board of Supervisors gave the commission 45 days to review the element. There are now only two scheduled meetings — next Tuesday and Thursday — before that period expires.

Levy and Masten argued for sticking to “the short list” of disputed policies that were identified by the Board of Supervisors. The other commission members — primarily Ulansey and Morris — suggested asking the board for more time so they could continue delving deeper into the policies. Ultimately the commission opted for a faster timeline. During next week’s two meetings the commissioners will try to get through the policies it didn’t get to last night along with the remaining policies on “the short list.”

Before the meeting wrapped up, there was just enough time for a bit more public comment. And, true to the spirit of the evening, sparks continued to fly. Tina Christiansen, a local realtor and regular meeting attendee, argued that the current board and commission are attempting to correct for an anti-rural living bias that dominated the earlier stages in the process, in part due to the prejudices of former Planning Director Kirk Girard. She continued:

Her speech, along with Ulansey’s earlier trail comments, inspired another fiery retort from Greacen, which wrapped up the evening:

One last development: Today, Planning and Building Department Director Kevin Hamblin submitted a letter to the Board of Supervisors requesting a $12,625 transfer from the county’s depleted General Fund, plus $6,500 in overtime money, to pay for the special meetings in this GPU review, plus the commission’s upcoming Housing Element review. The average cost per meeting is between $900 and $928, not counting staff time or overtime, according to the letter.

The Board of Supervisors will consider the request at its Tuesday meeting, and the Planning Commission will continue its re-review of the Conservation and Open Space Element Tuesday starting at 6 p.m.