Biking On Bridges: Why Can’t Humboldt Get Non-Motorized Transportation Right? 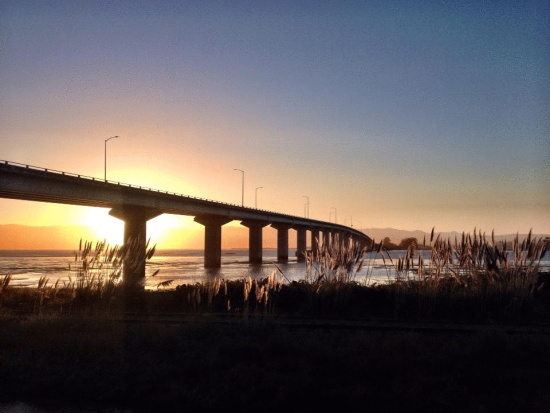 Bicycling over the bridges linking the Samoa peninsula to Eureka is an exercise in cheating death. Between the wall and the lane lies a space that feels about the width of my handlebars. No room for error, on either my part or a driver’s, exists. Some drivers give a courtesy berth. I love them. Some drivers roar past so close I could bang on their cars with my fist – and would, if it wouldn’t endanger me.

Many drivers are oblivious, busy talking, texting, finding a song on their iPod, lighting a cigarette, cursing the blob of mayo that just fell out of the sandwich they’re shoving into their mouths while rushing to work, any of those things we’ve grown accustomed to doing since cars became an extension of our living rooms.

Bicycling over the bridges is amazing. I can savor the view far more from my bike than my car. I see more herons, harbor seals, take a longer look at that peregrine falcon. The sight of the fishing boats reflecting past and present in the water surrounding them, sun angling through masts, is one of my favorite moments as is noting the rowers sculling across the bay, perfect strokes propelling them faster than I can pedal. In between the moments of fear, I inevitably grin.

And the exercise helps keep me healthy as long as the cars don’t kill me. Eureka is so close, the ride easy enough (again, aside from the substantial threat of vehicular manslaughter) – it seems silly to drive there on pretty days. Heading to Arcata is scarcely better – the side of the highway offers a similarly narrow option, the only difference being my body might wind up in a ditch rather than over the side.

Legally, a cyclist can utilize the same lane as the cars when “substandard width lanes” make sticking to the right-hand edge unsafe (California VC 21202a3). But I doubt most drivers have the patience to drive slowly behind a cyclist – especially the ones who don’t have enough patience to drive the speed limit, a significant problem on 255. I think some drivers would react to a cyclist slowing them down as an act of aggression, rather than concern, thus making for an even less safe situation.

I thought about all this after pedaling through downtown Brooklyn this week. On every block, cars honked, buses wheezed, other cyclists rang their bells – much more charming than bellowing, “On your left!” – dozens of pedestrians moved at varying speeds. Navigating through it all kept me exponentially alert, no time for daydreaming or making any but the most cursory cultural observations. Glance too long at an interesting bit of architecture and blammo! into a knot of strollers I’d go.

But in certain ways, I felt safer than I do in Arcata and definitely more so than I am on Broadway in Eureka. Primarily because everyone’s attention level is elevated – it has to be. The dance is a complicated one. Nobody wants to miss a step. 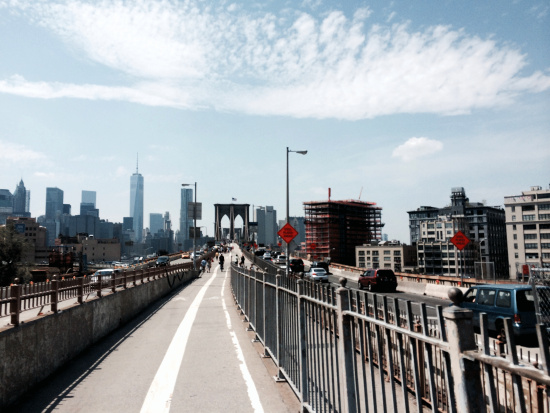 When I reached the Brooklyn Bridge, motorized vehicles ceased to be a threat completely as I cycled up the bike path, grateful for the stunning view of Manhattan, the cool breeze making the summer heat bearable and a dedicated corridor allowing me to enjoy both. I still had to make my way past the pedestrians who would wander into the bike lanes from their demarcated trail – tourists! – but unlike home, I had no reason to fear death.

According to the New York City Department of Transportation, more than 120,000 vehicles, 4,000 pedestrians and 2,600 bicyclists cross the Brooklyn Bridge daily. Eureka and Arcata combined have a population of about 53,000. I don’t have the car vs bicycle fatalities per capita handy, but as a human person who occasionally rides a bike for transportation, pleasure, exercise, all of the above, the fact that I felt safe in New York City in a way I never do cycling around Humboldt Bay startled me. It seems wrong to live in such a beautiful place where the climate is sometimes politically progressive and mostly atmospherically mild and have what should be a celebration of health feel marred by a sense of inevitable doom.

I’m lucky – I bike by choice. But given the minimal/nonexistent level of public transportation from the spit and the percentage of people without reliable cars, safe cycling options from the peninsula to Eureka and Arcata could potentially change lives. Beginning with not ending them.