« UPDATING: KHUM Listeners Are Finding All The Monkey Puzzle Trees 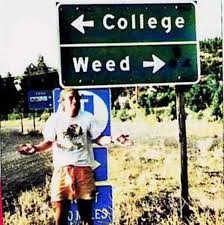 Looking for a part-time job to help pay that escalating HSU tuition? Well, you’ll be better off looking outside our county’s renowned weed industry, according to a new study from the Humboldt Institute for Interdisciplinary Marijuana Research (HIIMR).

The study, called College Students Working in the Marijuana Industry (pdf of results brief here), examined the responses to a 2013 student survey and found that students working in The Industry have substantially lower median incomes than those working in un-weed-related jobs.

Most of those working weed-related jobs — roughly two-thirds, according to a press release — were trimming. Only 12 of the 553 students who responded said they “owned or operated a marijuana grow site” during the previous 12-month period.

One factor in the results may be the difficulty of getting a foot in the door.

“We found that students report it is more difficult to find a job in marijuana-production than a job in other industries.” said Erick Eschker, paper co-author and HIIMR co-director. “Students report working fewer months, fewer hours per week, and earning less annually than those not in a marijuana-related job.”

Nineteen percent of survey respondents said they’d tried and failed to find a job in the pot scene.

Jobs held by students surveyed include:

The highest salary reported by a pot-working student? $65,000. Not bad, right? But a student working a straight job reported hauling in $126,000.

“Forty percent of students working in marijuana-related jobs who moved to Humboldt County had prior marijuana job experience, but for most students the chance to work in such a job was not significant for the decision to move to the county,” said Joshua Meisel, co-author and HIIMR co-director.

Still, 19 percent of non-native respondents working in the industry said the opportunity was “at least somewhat significant in their decision to move to Humboldt County.”

The study’s authors urge caution in drawing too many conclusions, since there’s no baseline data, the results were self-reported and fully 75 percent of the sample didn’t respond.

And since some people insist on snickering at the very existence of a marijuana research institute, the press release includes this defense from Eschker:

“We are the only academic institute in the U.S. created to understanding the social, economic and environmental impacts of this prominent and controversial subject. As researchers at an institution of higher-learning, it’s important for us to examine because of its prominence in the local economy.”

We appreciate it, professor.