LIVE: The Eureka Police Department Press Conference on the Shooting of Tommy McClain

Note: A number of updates have been made to this post since its initial posting in order to reflect Chief Mills’ testimony more thoroughly and accurately. The most substantive of these changes pertains to the “clear, concise commands” initially given to McClain by Sgt. Linfoot. Mills did not specify the exact nature of those commands.

LoCO has uploaded passable audio of Chief Andy Mills’ entire press conference describing the shooting of Tommy McClain, which is now available below: 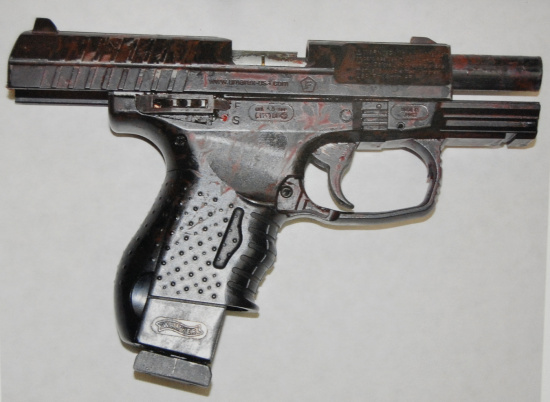 Photo of the BB gun found on Tommy McClain covered in McClain’s blood. 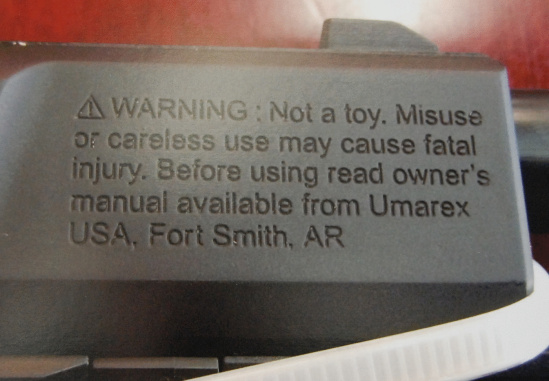 Disclaimer on the replica weapon. 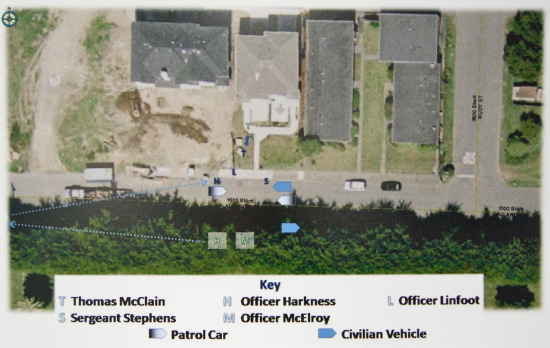 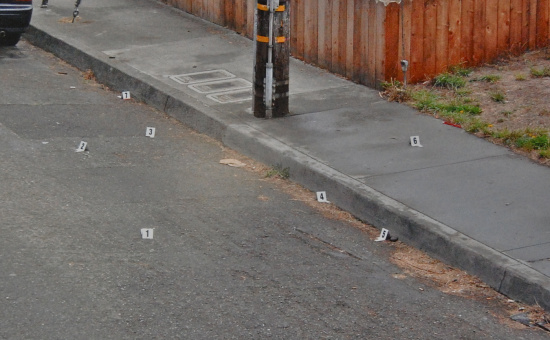 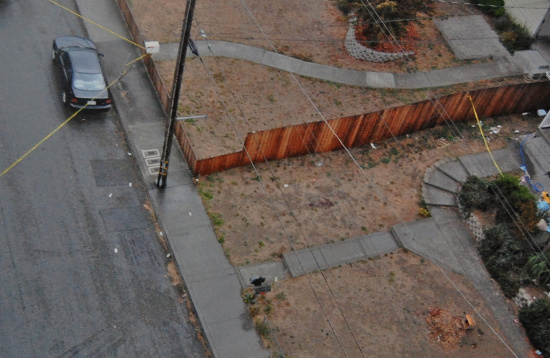 Apparently McClain had a hearing problem, Mills said in response to a question from Thadeus Greenson of the NCJ, but he clearly understood the position he was in.

With that, Mills thanked the assembled crowd and the press conference concluded.

Mills declined to identify the man with whom McClain had a confrontation immediately prior to being shot.

Seven shots were fired; three struck McClain, including one in the head, one through the bicep and chest and one in the gluteous maximus.

There were several witnesses who reportedly saw parts of the incident. Mills said detailed interviews are filmed, compared and contrasted.

It’s our opinion that no one actually witnessed the shooting besides the three officers, said Officer Ron Harpham.

There were witnesses on the west side who heard and saw parts of the incident, he added.

There were only two officers in a position to shoot — Linfoot and Stephens. Asked why only Linfoot fired his weapon, Mills said that once Linfoot “eliminated the threat” there was no reason for Stephens to shoot. Plus, Stephens, despite being in “high and ready” position with his gun, was giving verbal commands and thus not in ready position to fire, Mills said.

Replica of the gun McClain had in his possession. 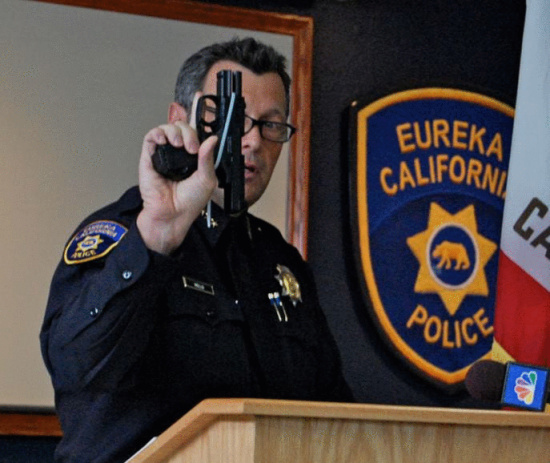 A photo of the weapon found at the scene. It is an air pistol that fires BBs. 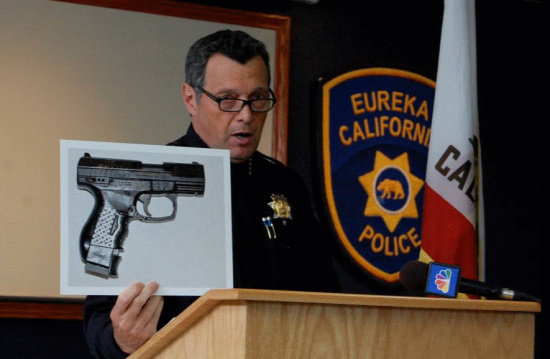 The gun is a replica of a Walther PPQ. Most officers shown the gun couldn’t tell the difference between the fake and a real gun.

There is some video, Mills says, but the shooting itself was not caught on video. It does show Officer Stephen Linfoot firing his weapon. The replica used by McClain was found on his body, Mills said, in the waistband of his pants.

Mills said he immediately demanded a thorough, objective investigation, involving both the DA’s Office and the EPD as well as the HCSO, DOJ and Arcata PD.

Mills holds up “an exact replica” of the gun taken off McClain. [Update: It’s a crime in California to display a replica gun in public.] Even in daytime it’s hard to tell if this is a real gun or a replica, Mills said. And indeed it is a realistic-looking gun.

There are extensive videos, witness statements, autopsy report and more.

The investigation will be completed, which will take a month or more. Forward the investigation to the DA for review. Then there will be an internal review of policies and procedures and training. That report will be released to City Council. Then Mills will determine the status of Officer Linfoot — when he can go back on duty. 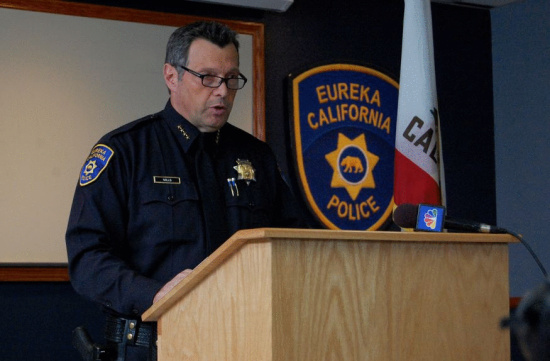 [Update: Stephens, who was giving verbal commands, was at the “high-ready” position, Mills said. “But when the body dropped to the ground, he did not shoot,” Mills said. “He did not need to.”]

Stephens, Harkness and McElroy did not shoot. No other guns were fired that day. This is Linnfoot’s only officer-involved shooting in his 13-year career. The whole encounter took about one minute.

One round entered McClain’s outside bicep and exited through his chest. There was a second entrance wound in his chest cavity. This indicates McClain’s arms could not have been in the air.

[Update: Officer Linfoot drove by at a slow rate of speed, Mills said, adding that this is on video.]

As the officer approached McClain, he pulled a gun out of his pants, “cycled” it [that is, he pulled the slide back] and put it back in his pants. There was no doubt in officers’ minds that they saw the weapon and heard the cycle, or the slide.

Sgt. Stephens used the spotlight to illuminate McClain in the yard. Another officer [McElroy] said, “Yes, that is the man with the gun.” Stephens gave McClain clear, concise commands to put down the gun gain compliance. Stephens was about 12 feet away. McClain told Stephens, “You don’t have the right to search me.”

McClain did not want contact with the police. Officer Linfoot heard Stephens yelling, sped around the block in his car and got out, observing the scene. Linfoot could clearly see the gun in McClain’s waistband. McClain initially complied, put his hands up.

Stephens said, “I see the gun. Don’t touch it or I will shoot.”

Three police officers were dispatched to 1620 Allard unit A to find fugitive Duncan Devine on a felony warrant. Word was he had a 9 mm gun. He was found at a later date. Two officers were on foot waiting for him to come out or come home.

[Update: A third officer was in a roving black-and-white police car, patrolling the area. The initial operational plan was to “assault the house,” Mills said — go inside and take people into custody. But that’s a high-risk environment and it would be much easier to get him in an open environment. So the plan was altered to the above-described scenario.]

About midnight, a car pulled up and dropped off three people at 1620 Allard #B. Three people went in, McClain came back out. A car blue Ford pickup pulled up, a man got out and confronted McClain. [Update: The man thought McClain accused him of dealing drugs. He was actually there to visit a friend.] Officers witnessed the confrontation. After the man left, McClain appeared to be “puffing up,” intently watching where the man walked away.

He also “indexed,” that is subconsciously check to see if a gun is present. Officers noticed this but did not see a weapon. Officers were concerned that if the man returned, there would be an armed confrontation.

Sgt. Stephens directed the officers to stay in place but to have the roving officer go to McClain and have him go back into his house.

We evaluate officers’ decisions in the bright light of day when there’s time and a calm environment, Mills said. “As police officers, we expect scrutiny. To be very honest, we welcome it.”

The purpose of this briefing is to provide information that is transparent and open, Mills said. The purpose of the investigation is to provide facts as to what occurred that night. It’s being handled thoroughly and professionally, Mills said, and he’s confident that that’s happening. He’s also confident that the facts of this case support the actions of the officers that night.

Chief Andrew Mills says this will take a little while. “The events that took place in the early morning hours of Sept. 17 are tragic.” He says he’s spoken to McClain’s mother. “To be very frank, all of our hearts break for her.” The events will have a lifetime of impact for the family, officers and community, Mills said. “Such is the nature of policing.”

At 11:30 a.m., Eureka Police Department Chief Andy Mills will be holding a press conference about the shooting of Tommy McClain, who was killed by police department officers outside a home on Allard Avenue two weeks ago today.

The EPD has so far released very little detail about McClain’s death and the circumstances that led to his shooting. Mills has said that he wants the investigation into the incident to be complete before answering many of the public’s questions — the names of the officers involved, the type of gun recovered at the scene, the circumstances that led the officers to confront McClain, who was sitting outside his relative’s Allard Avenue home Facebooking scant moments before EPD officers shot him. For some, the incident recalls the department’s annus horribilis of 2005-06, when officers shot and killed four people, including a mentally ill woman and a 16-year-old boy.

We should know much more shortly. Stay tuned, and check the Outpost’s previous coverage for background. 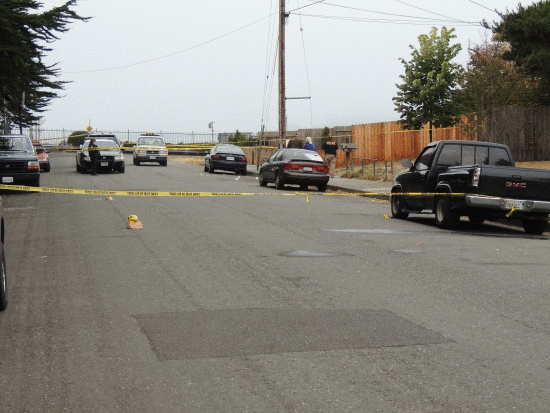