« LoCO on the Pot: Harvest Season!

When Problems Strike Marijuana Gardens, Do Growers Stay With Organic Solutions or Do They Turn Elsewhere? 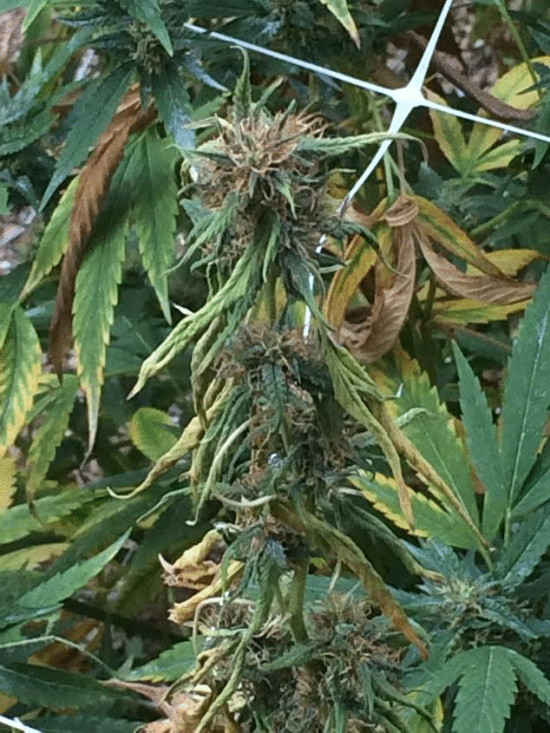 To spray insecticides, pesticides or miticides on cannabis and possibly poison the harvest, or not to spray and possibly lose your crop and your livelihood? That is a dilemma faced by many marijuana growers each year. Most pot growers say their plants are organic, but when their garden is threatened, how do they really respond? Do they apply non-organic solutions? Does criminalizing cannabis make good farming practices difficult?

This summer, much of the greenery in the garden of a cannabis farmer we’ll call Chris (not the grower’s real name), was turning brown and it wasn’t just the leaves. “On a lot of my flowers, the pistils were prematurely stunted. There were branches with shriveled buds and lots of prematurely brown hairs,” the Emerald Triangle grower explained. The leaves, she said, went prematurely yellow and died. (See photo above.) According to Chris, some of the plants looked perfectly healthy one day and four days later had completely withered away.

Until recently, when problems struck in marijuana gardens, even long-time growers had a difficult time finding solutions. Cannabis farmers who often work alone and in secrecy can be faced with diseases and pests that they don’t know how to fight. Fearful of turning the eyes of law enforcement or thieves toward their patches, they don’t want to ask for help, and unlike farmers of other valuable crops, they don’t have government or universities working to help them. In the past, they have had to rely on word-of-mouth solutions from fellow growers. That is changing now. Access to the internet and a new crop of local businesses are helping growers produce healthier plants using science that benefits the farmer and the end consumer.

Chris, the Humboldt grower with the shriveled buds, talked with fellow growers and did research on the internet in order to identify the cause of the stunted buds. In the end, she decided the affected plants had a broad mite infestation.

Sometimes the internet and other growers can help a cannabis farmer make an accurate diagnosis, but other times they don’t. Broad mites, russet mites and fusarium (known issues affecting cannabis) have similar symptoms but are not treated the same way, explained Kevin Jodrey of Wonderland Nursery in Southern Humboldt. Getting exact diagnoses from lab tests can help the growers improve their situation this year, he said, and teach them to put in place healthy practices that will reduce the chance of having repeat problems in ensuing years.

As 2016 and the possibility of marijuana legalization approach, Joanna Berg, part owner of Dirty Business, a new Arcata based firm that tests cannabis and other plants for various diseases and pests, as well as analyzes soil, explained growers need to step up their game and become more scientific about their farming procedures. “Getting real information and improving practices is an important strategy for our future,” Berg said.

Berg and Jodrey both recommend getting samples of plants that look unhealthy into a lab. When a grower sees a problem, Jodrey said, “first thing to do is get [the plant] tested.” Tests can take several weeks to get results but often a consultant can make recommendations almost immediately.

Jodrey explained that there has been a big increase in issues with mites and fusarium in the last few years. “People can move so freely about,” he said, which makes it more likely that diseases and pests hitchhike on from one garden to another. And there is more marijuana being grown, making it easier for pests to move from an unhealthy garden to the neighbor’s healthy one.

But to Chris the grower, how the plants contracted the problem was not the biggest worry. She needed to know how to salvage her harvest. Unlike many growers, Chris was lucky. The small piece of property she owned was paid off. But, a bad harvest could mean that all the money already invested in the garden was lost. “I put every last penny into this garden,” she explained. Now she was worried about how to make money from plants that might be dying. Other growers are often faced with losing their home and vehicles if their harvest fails.

Online marijuana forums insisted that the only solution to broad mites was to spray Avid, a powerful insecticide/miticide used legally on ornamental plants but not considered safe for food products. Legally the substance (and many others like it) can only be used on plants for which it has been approved. Cannabis is not one of those plants. Anecdotal evidence suggests that being exposed to Avid can lead to serious symptoms and the warning label cautions that if inhaled call “a poison control center or doctor” or “[i]f person is not breathing, call 911 or ambulance… .” The label also cautions, “This pesticide is toxic to fish and wildlife.”

Chris was concerned about possible side effects but decided that Avid must be applied. It was just a business decision. “Either you use that or you lose everything,” she reasoned.

Chris asked someone to go to the garden store and pick up the needed items. Soon the individual called her up. The woman was very upset. Other customers and the store clerk had convinced her that applying the substance would poison not only the marijuana but the person applying it. After listening and considering the options carefully, Chris chose not to use Avid or any non-organic solution.

According to both Jodrey and Berg, Chris made the right decision, though they understand the temptation to use such substances. Berg said, “A broad mite infestation can take down a whole crop… . This is people’s livelihoods. People get into a panic. They reach for something strong that will knock [the mites] back.”

Beyond that, Jodrey explained there is pride involved. “Nobody wants to admit their plants are dying. Their ego is directly connected to their garden. It’s not just profit.”

However, Berg explained the downsides of using “heavy-chemie pesticides.” When growers begin doing this, she said, “I think they are shooting their whole community in the foot.” There are several reasons for not using these substances, but one of the obvious concerns, she said, was that the growers often don’t correctly apply the substances. This can lead to the pests building up a resistance. Then, “they get really, really resistant buggers in there, and that’s no good.”

By late summer, Chris the grower was hearing rumors from neighbors that the broad mite infestation was spreading through much of the Emerald Triangle’s marijuana gardens. Any farmer faced with losing a season’s worth of labor might be afraid. In an underground economy where it is difficult to get solid information, fear can turn to panic. Chris’ belief that the broad mite infestation was of epidemic proportions wasn’t supported by either Jodrey or Berg’s experience. However, both indicated that a larger number of growers than usual had experienced issues with not only broad mites but also russet mites and fusarium.

Nonetheless, with limited access to good information and only reports from fellow farmers to go on, Chris believed that gardens across the Emerald Triangle were being destroyed by broad mite. By September, Chris was fatalistic. “I’m honestly preparing to lose everything,” the she explained. Though Chris later realized that it wasn’t true, initially she thought every plant in the garden showed signs of broad mites. Chris began planning how to keep the property if the plants didn’t produce salable buds. “It means that I get a trim job. Then I move to the Bay Area and try to get a job down there,” she explained.

Chris worried that “if a lot of people are getting this [infestation], the scramble for jobs is going to be insane. I don’t see how I’m going to get a trim job. The likelihood that I’m going to find enough employment to live around here is low.” She also worried that the only growers with harvests would be those who had used a heavy miticide. “The other issue is do I want to work for people who sprayed their plants with Avid?” she asked. After a pause, she admitted wryly, “I’m trying not to be hysterical… .”

Eventually, like many other farmers with broad mite infested plants, Chris used an OMRI (Organic Materials Review Institute) approved product to fight the infestation. “It stopped [the mites] in their tracks,” she wrote in an email to the Outpost. “At the end of the day I lost maybe 1/3? Not too bad and I didn’t have to use the poison!”

Both Berg and Jodrey say that the best way to prevent problems with marijuana is not to wait until problems begin to show. They say it is best to start with nutritious soil and sturdy plants. “The linchpin is how are you feeding your plant,” Berg explained. “How are you creating a healthy plant.”

But if growers do get broad mites, other pests or diseases, many feel they need to resort to using substances like Avid. Chris believes that pesticide use might be wider than believed. Everybody says they don’t use pesticides, she pointed out. “They say they grow pure organic. People don’t want to say, ‘Oh, yeah, I use Avid.’”

According to one study of pesticides and cannabis, up to 70% of buds can be contaminated. According to the abstract of the study, “Determination of Pesticide Residues in Cannabis Smoke,” published in the Journal of Toxicology,

Recoveries of residues were as high as 69.5% depending on the device used and the component investigated, suggesting that the potential of pesticide and chemical residue exposures to cannabis users is substantial and may pose a significant toxicological threat in the absence of adequate regulatory frameworks.

One of the problems, Jodrey said, was that the state government tells medical marijuana growers, “You must be pure but we will not help you with the purity.”  Medical growers are expected to provide a clean product to the dispensary, but unlike other forms of agriculture there is no government regulation or information available to help the cannabis farmer achieve the desired end product.

But both Berg and Jodrey say testing and appropriate responses to the threat can help the grower achieve a healthy plant and a healthy end product for the consumer. Last year, Berg said, “I had a client that lost part of his crop to broad mites… . We got him a management plan… . He is changing a lot of his farming practices. He is doing more holistic farming. He is having the best year ever now.”