« Letter from Istanbul: Living in the New Turkey

Pastor Bethany: Being Anyone is Hard »

Tomatoes and Cannabis: Or, Backwoods Agriculture is Kinda Mysterious 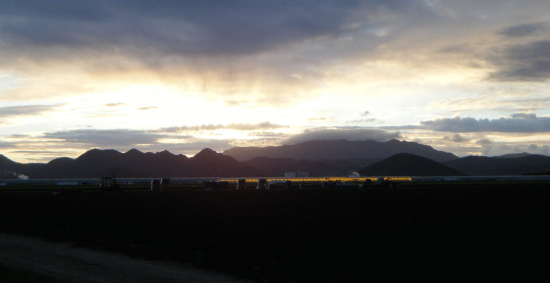 Lately, when I stand out on my balcony at night, I can see a great glowing structure on a nearby hilltop. I assume it’s a greenhouse, and its glow reminds me of the Houweling’s tomato nursery greenhouse down south in Camarillo, a pretty active agricultural area on the coast in Ventura County, near Pt. Mugu.

The Houweling’s greenhouse is glass, and it’s way big. Massive. Damn, does that greenhouse light up at night and squelch any hope of stargazing in the neighborhood. The glowing structure that I can see from my home in Humboldt — if it is in fact a greenhouse — is child’s play compared to Houweling’s “125 acres under greenhouse glass.” (Quote from the Houweling’s “History and Heritage” page.)

No joke, that greenhouse is huge. They grow hydro tomatoes with sunlight plus supplemental lighting at night. This Houweling’s webpage has a couple of photos from inside and outside the greenhouse; check ‘em out for perspective.

The Houweling’s greenhouse is all sealed off from the elements — weather and pests — so apparently they don’t have to get so crazy with the pesticides and herbicides. At least that’s the message coming across on their website. The tomatoes are not organic — they only use pesticides as a “last resort.” Also, they don’t grow GMO and they are responsible with their water use. Good to know.

(I don’t think the neighboring farms have “last resort” pesticide policies though — the planes and helicopters flying around the agricultural fields of Ventura County aren’t from CAMP or law enforcement. They are pesticide- and herbicide-dropping aircraft, spraying the strawberries and the lima beans and the celery, spraying the shit out of everything. There are pesticide-spraying tractors and people too. Lots of spraying.)

The Houweling’s greenhouse is big, trippy agriculture. I’ve seen workers in those sterile suit outfits going into the massive greenhouse to tend the hydro tomatoes. It’s weird, in my opinion. And yeah, at night, that Ultra-Clima greenhouse glows unnaturally, big, bright and orange. The intensity of the beaming orange greenhouse light rivals the intensity of the lights of the refineries off the 405 freeway in Torrance and Carson.

Regardless of whether or not you think the Houweling’s greenhouse qualifies as a monstrosity, tomato farming is legal and there is a public website with content that describes Houweling’s practices and history. Sometimes they open their facility to the public too. The Houweling’s company presents its methods as revolutionary and sustainable, which is debatable. At least there is at least some degree of transparency. 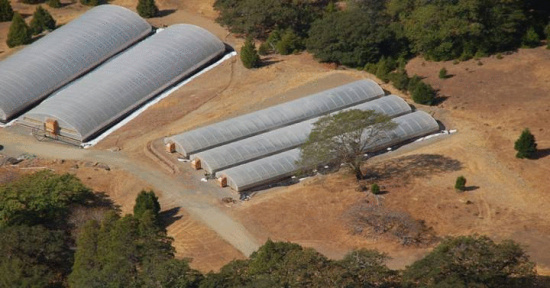 But in the case of last week’s big five-greenhouse bust in Salmon Creek, there was never any transparency about the farming practices at this site. The farmer or organization doesn’t have a website with information about their methods, and they probably didn’t have neat logo stickers that they affixed to bags of processed pounds. Now that law enforcement rousted the place, community members can get some idea about the farming practices from the photographs and the scant law enforcement PR. However, the end user of cannabis from that site probably has no idea.

The other day, a bonafide Humboldt county person told me that he just saw a cannabis plant growing outdoors for the first time. I was surprised, but upon further reflection, I realized that this is pretty standard with agriculture. Many people are unfamiliar with produce sources — like maybe someone doesn’t know what a peanut plant looks like, or that the blueberries in their fruit salad came from Argentina.

Last weekend at the Golden Tarp Awards, plaques were presented to the cultivators of the top 16 strains in the competition. But during the awards ceremony, only a handful of cultivators actually came out of the crowd for their awards. No farmer’s face to place with the grand prize winner of that competition, just mysteriousness. And that’s the way of the weed. 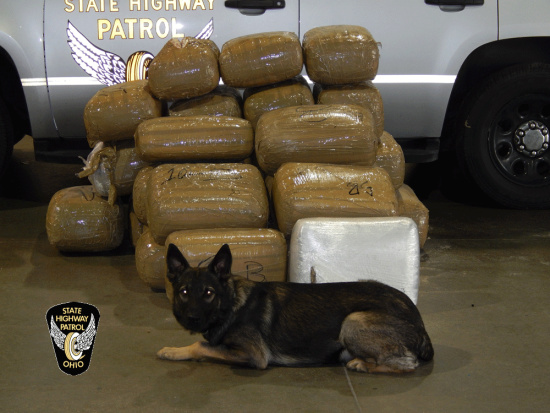 Check this out: On Sept. 18, Ohio State Highway Patrol troopers arrested a guy for having 651 pounds of weed in his Tahoe. Where did all that weed come from? Dep from Humboldt? Just curious. Not seeing a “Grown in Humboldt” logo on those packages…