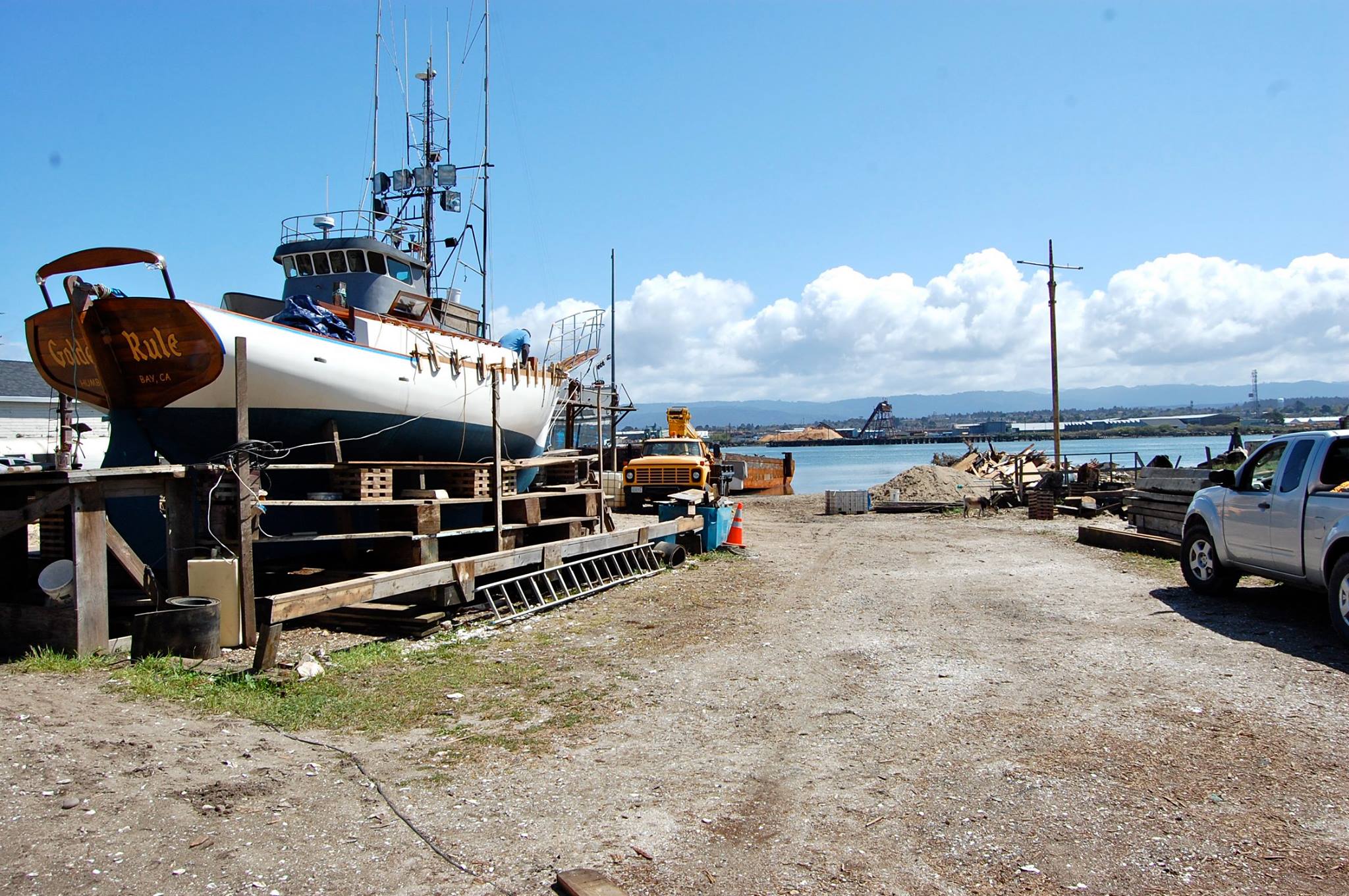 This morning was a glorious morning at the Zerlang & Zerlang yard in Finntown, the last vestige of the massive shipworks that once crowded the bay side of the Samoa Peninsula, a century or so ago. Goats and dogs and kids chased each other up and down piles of sand, and the sun smiled down warmly on the ten thousand pieces of jetsam that make up the Zerlang yard – the scraps of wood and rope steel, the rows of shacks, the rust-stained cars and boats and barge. The boatwrights…

Mike Gonzales fiddled about atop the Golden Rule ketch, which was enjoying her second morning out-of-doors in a very long while. Yesterday they knocked down the makeshift structure they had built to protect the historic old vessel, which Leroy Zerlang fished out of the sea off Finntown many years ago. It’s strange to think a boat might need shelter from the elements, but the Golden Rule was a literal wreck: hulled, stripped, and very very old. The characters who hang around the Zerlang yard built a home for it while they tended to her, giving her back her sea legs. They’re very close now. 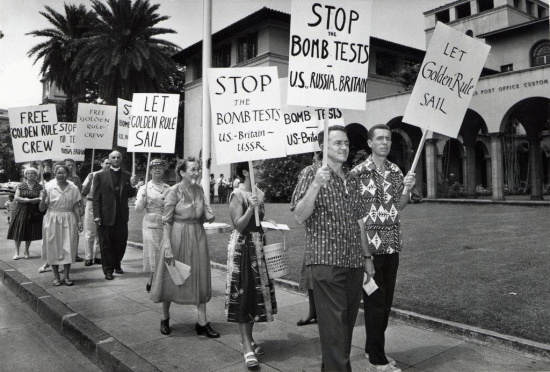 The Golden Rule is a little 30-foot boat that once belonged to a visionary captain – Albert Bigelow, a former World War II naval commander who turned Quaker after the horrors of Hiroshima and Nagasaki. Bigelow sailed the Golden Rule to the South Seas to protest and disrupt nuclear testing in 1958, threatening to put their bodies in the way of an A-bomb test and garnering massive press for the anti-nuclear movement. They never made it to the Marshall Islands – they were intercepted and arrested in Hawaii – but the publicity Bigelow and his crew garnered during this missioned directly to organizations like Greenpeace and the Sea Shepherds.

“It gave them the idea to use the ocean as a protest platform,” said Steve Nienhaus, a former Greenpeace sailor and the man who has rigged electrical system for the refurbished Golden Rule, while the Outpost was on a tour of the boat and her caregivers this morning. 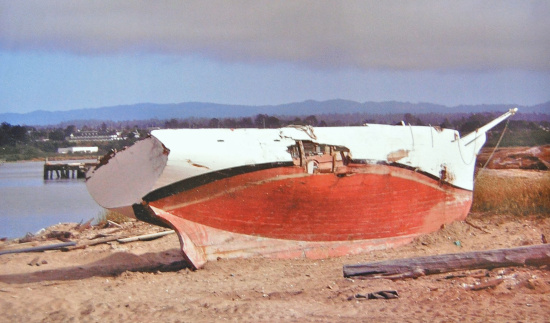 The wreck of the Golden Rule.

The Golden Rule’s history after 1958 is somewhat dark, in parts. Somehow, years after her historic voyage, Bigelow’s ketch ended up in the hands of one-time Humboldt County resident Lawrence Badgley, who was famous in the 70s for being the go-to pill-provider for The Rolling Stones and other rock figures of the era. Like most of Badgley’s Humboldt County projects, the Golden Rule slowly went to ruin, until a storm arrived and finally sank her. Luckily, Badgley was living close to the Zerlang yard at the time.

It’s been five years in the doing, but now the Golden Rule is just about ready for her next mission: To finish fitting out, then to sail down to San Diego in time for the annual convention of Veterans for Peace in early August. The organization will take possession of the ketch at the convention, and plans to use her as a peace ship thereafter, sailing from point to point around the globe. Veterans for Peace is so jazzed about this that the materials promoting the annual convention feature a silhouette of the boat.

Chuck DeWitt, an old salt who is overseeing the restoration effort, said today that a lot of different organizations expressed interest in acquiring the Golden Rule, but he couldn’t be happier that the Vets for Peace won out.

“I call her my weapon of mass education – my WME,” he said.

Almost all the major structural work is done. The hull has been rebuilt with dense purpleheart wood, and the finework has been redone in teak and mahogony, some of it salvaged from other Zerlang boats. Shipwrights Breckin Van Veldhuizen and a colleague have hand-shaped new masts, which are nearly ready to be stepped. But the Golden Rule effort is up against a hard deadline now – they hope to have a ceremonial launch in June, before putting the ketch through its paces in advance of her trip south – and a tour around various buildings around the Zerlang yards reveals a baffling array of rings, blocks, hatches and other marine accoutrements waiting their turn to be installed. It’s their crunch time.

For one thing, they’re still putting together a crew. The Golden Rule is built for a crew of four, though that could be increased up to six if a night watch sleeps during the day. The Golden Rule Project website is soliciting applications from people who would like to volunteer to sail the thing down to the Vets for Peace convention. DeWitt said that many people, including a retired Navy captain, have already applied to captain the boat on the mission.

More importantly, though, they’re still hoping to raise more cash. The local business community has been hugely supportive of the project to date, DeWitt said, but they’re still looking to get $10,000-$15,000 together to completely finish the fitting-out. For instance: They still have to get a life raft. If you’d like to help, find the “Donate” button on the Golden Rule Project website. Also, they have a Hobie Cat they’re looking to sell. If you’re in the market for a Hobie Cat, give them a call.

In any case, the plan is for the Golden Rule to sail across Humboldt Bay on June 20. There it will dock at the Aquatic Center, near Halvorsen Park, for a public ceremony with food, drink, music, speakers and tours of the boat. And then, soon after, the ketch’s sojourn in Humboldt will be at an end. 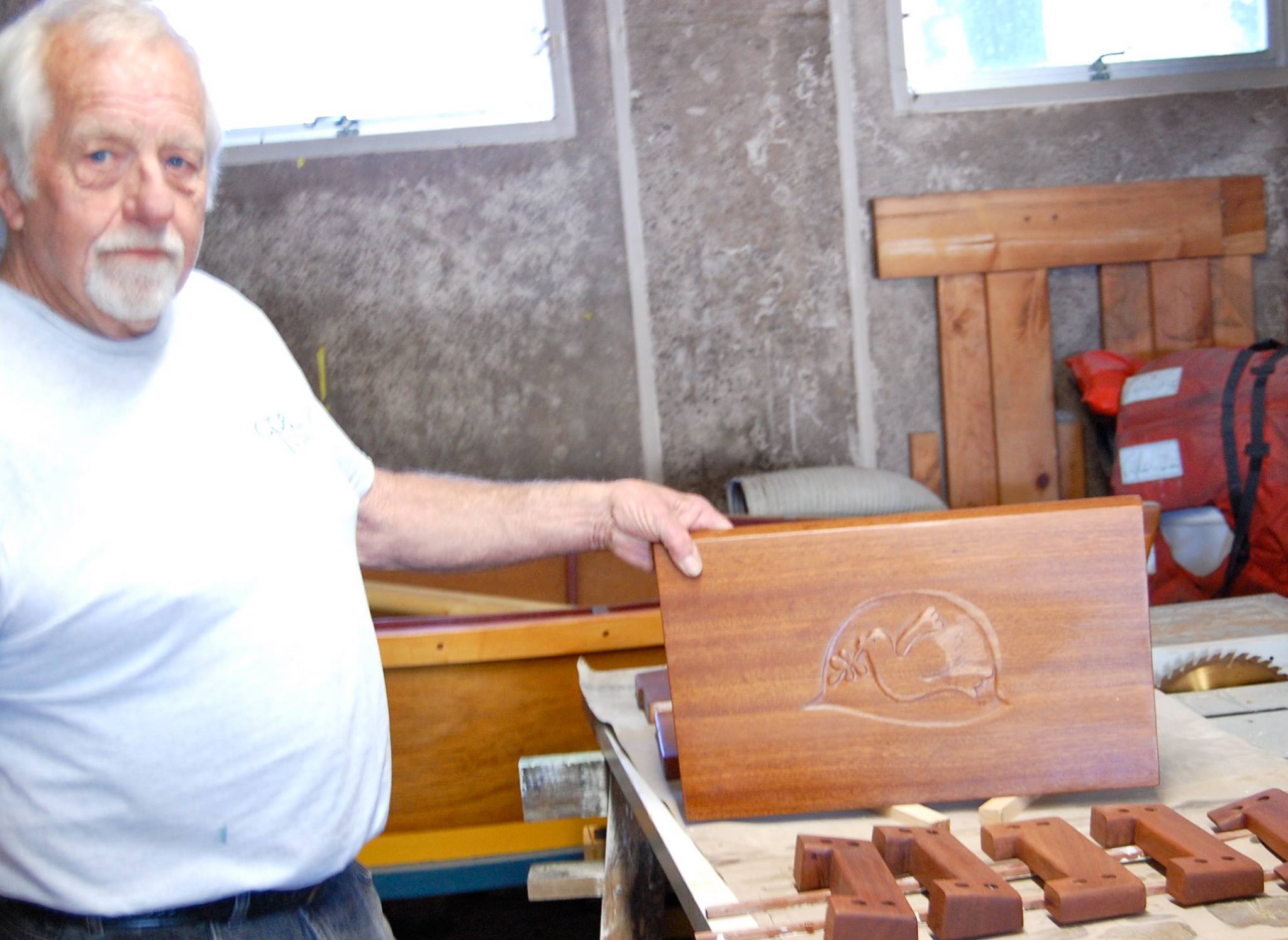 Chuck DeWitt displays some of the Golden Rule’s new woodwork. This block was carved by Breckin Van Veldhuizen to honor Veterans for Peace.