« Project Save Guido Avenue: How a Facebook Campaign About a Mentally Unstable Neighbor Brought Peace to One Fortuna Community

Just finished up a long day on the beach. The Marine Mammal Center, who is the “locally” permitted stranding coordinating body came up with a team and equipment to collect skin and organ samples. Humboldt State also made their way down to collect samples. As you can imagine, lots of folks are interested in the findings and the re-articulation of the skeleton, especially our own Noyo Marine Science Center.

The animal was a male, 25ft in length with a 5ft tall rounded dorsal fin and a solid saddle patch. There was notable “human interaction” with crab pot floats and rope wound around the animals tail stock near the tail flukes and up around it’s right pectoral fin. This had created some deep grooves on both sides of the tail stock.

The animal was not emaciated and had a thick blubber layer: stomach contents included a large harbor seal, nearly completely intact. This is, of course, what our transient marine mammal eaters feast on. There was also lots of scarring, possibly from this type prey. However, the animal’s teeth were quite worn and it did have a few cookie cutter shark marks on it which may be more typical of an offshore type killer whale.

Dorsal and saddle patch photos have been sent out to several colleagues between California and Washington, in hopes that someone can help us make a match. Until then we have to wait for the genetics results to come in.

UPDATE, 4:40 p.m.: Naked Whale Research director Jodi Smith called from the scene with a bit more detail. The whale is about 25 feet long, she said, and the team was working on getting it to higher ground in hopes of performing a necropsy this afternoon. “There’s no real obvious damage, she said, and suspects the animal to be an offshore type of killer whale as “it’s teeth are quite worn down… they wear their teeth down eating on shark, there’s about 8 or 9 species that they prey upon.” They don’t have an ID on the orca yet, but are working on it. 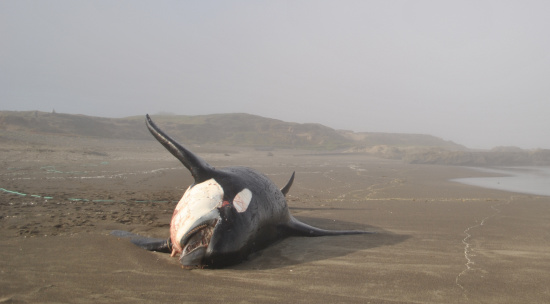 While killer whales have been a familiar – and exhilarating – sight off the coast of Fort Bragg in recent days, this morning’s discovery of a dead male orca washed up at MacKerricher State Park came as a surprise, especially given the rarity of the finding. A 2013 study analyzing North Pacific killer-whale strandings back to 1925 noted that “while orcas are some of the most widely distributed whales on Earth, very few dead ones are ever found.”

Such instances are indeed unusual, confirmed Jeff Jacobsen, local killer whale expert and marine mammal biologist. Jacobsen recalled one stranding at Centerville Beach several years ago, he said, and an orca was found washed up in Point Reyes in 2011.

What isn’t uncommon is finding marine mammals entangled in derelict fishing gear. (LoCO readers may remember when a gray whale was tangled in crab pot netting a few years ago off the South Jetty.)

More than 300,000 whales, dolphins and porpoises die every year from being caught in such gear and drifting fishing nets. As seen in the photos submitted by Friend of LoCO Nadia El Adli, fishing buoys are wound around the orca’s tail, but attributing the cause of death will have to wait for an official necropsy. 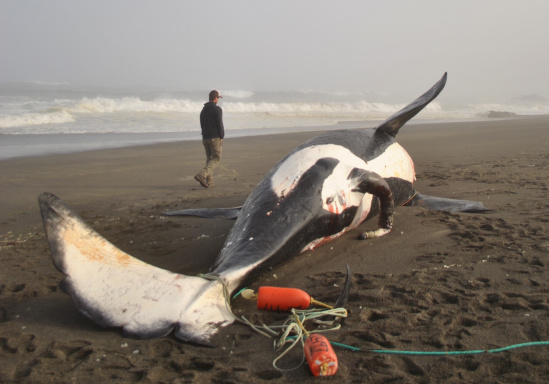 Preliminary observations suggest the killer whale was a transient, not a member of the Southern Resident Killer Whales (SRKW), the smallest of four resident communities most commonly seen off the coasts of Oregon, Washington and Vancouver Island, B.C.

The SRKW is an endangered clan of orcas that consists of the “J-pod,” “K-pod” and “L-pod,” and is of particular interest to the Fort Bragg-based Naked Whale Research organization.