« A Quick, Crappy Poem About Your Latest Mysterious Eureka Boom 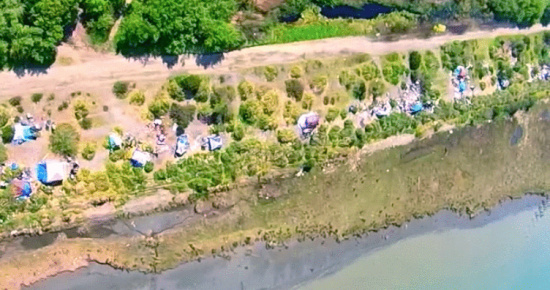 Earlier this week, two Eureka city government department heads presented the City Council with a bold, four-phase plan to dismantle the homeless encampments at the so-called Devil’s Playground — the greenbelt along the city’s waterfront, between the Bayshore Mall and the foot of Washington Street.

Police Chief Andy Mills and Community Development Director Rob Holmlund spent about an hour PowerPointing the council through each step of their comprehensive strategy. But the council — and later, the public — naturally paid most attention to the third phase: The establishment of a city-sanctioned temporary campground for people dislocated during the purge of the Devil’s Playground. Mills and Holmlund admitted that the campground would likely cost the city some money — port-a-potties would have to be set up, fences likely erected — but they argued that the situation demands immediate action.

And by “immediate,” they mean pretty darned quickly. The Mills/Holmlund plan calls for the temporary campground to be set up by June 1 — a little under six weeks from today.

But there is some reason to doubt whether this timeline is realistic. Not only would a site (or several sites) need to be chosen and prepared, not only would the city need to find funding to run the temporary campground, but it appears that the city hasn’t yet prepared the way bureaucratically. Each of the four sites that city staff have identified as possible locations lies within the city’s coastal zone, and is therefore subject to oversight by the California Coastal Commission and the city’s own Local Coastal Program.

Project development in California’s coastal zone is, famously, not always the speediest process. It’s hard to see how the city can meet the timeline its staff has proposed and still stay within the letter of the law.

When asked about possible conflicts between the Devil’s Playground cleanup timeline and the Coastal Act yesterday, Holmlund demurred. “I’d prefer not to concentrate on that topic right now,” he said. “We’re looking into that.”

It’s no mystery why the city — particularly the police department— has placed great emphasis on the Devil’s Playground in recent months. The city-owned parcels that make up the area have spiraled out of control, with an estimated 100 to 200 people setting up camp in the area. Calls for police and fire services to the area are frequent and often serious. The police department, in a series of high-profile raids on the encampments there, have regularly emerged from the marshes carrying arsenals of confiscated guns, mountains of stolen property and a few felony suspects that had eluded arrest by hiding among the homeless.

Last week, the Eureka Police Department, with help from local law enforcement agencies and others, conducted a high-profile sweep of the area, which resulted in the arrest of over 20 people with outstanding warrants. Chief Mills and EPD Captain Steve Watson held a press conference midway through the operation in front of a table full of firearms confiscated from residents of the area in recent months. Mills took care to note that no homeless people without outstanding warrants would be arrested that day, but warned that the city would soon be coming through again and telling everyone that camping at the Devil’s Playground would no longer be tolerated.

That sweep, which took place on April 15, turned out to be the first phase of the larger master strategy that would later be unveiled at Tuesday’s City Council meeting. Mills called it “Operation Safe Trails,” and it involved removing the known criminal element from the larger population in the greenbelt.

As Mills and Holmlund described it on Tuesday, the second phase — “Operation Helping Hands” — will be a two-day services fair. Local governmental agencies and nonprofit organizations that provide services to the homeless will set up shop at the Playground, where they will hopefully acquaint residents with programs that can offer them help.

“Operation Clean Sweep,” the third phase, would take place once the city-sanctioned temporary camping facility is in place. At that point, the police department would evict everyone from their current encampments and move them to the legal campground.

The fourth and final phase, “Operation Final Stretch,” would come into play once the planned conversion of the county’s Multiple Assistance Center from a family services facility to one that houses chronically homeless single individuals is complete. At that point, people would be transitioned out of the temporary camping facility and into the orbit of the MAC.

The wheels are already turning on each element of this plan. Several organizations are signed up to participate in the upcoming “Helping Hands” services fair, plans for the conversion of the MAC have been underway for a few months, now, and — though the City Council has not yet taken any action to endorse, reject or modify the Mills-Holmlund strategy — several sites have already been identified as potential locations for a temporary campground.

But out of all the elements of the plan, the campground will have to be the most problematic. It is coming up very quickly, according to the official timeline laid out by Mills, and it will inevitably involve the expenditure of city funds. Plus: It is not across-the-board popular. At Tuesday’s City Council meeting, Councilmember Melinda Ciarabellini, who was involved in a similar effort to shut down homeless encampments on the South Spit nearly 20 years ago, flat-out said that she did not think a city-sanctioned campground was a good idea. She noted that a report on homeless issues that the city commissioned recently warned against legalized camp sites, and begged her staff to hold off until the Multiple Assistance Center transformation is complete.

“I think we are so close to opening the MAC,” she said. “I know that the director of Health and Human Services is very supportive of getting that up and operational as soon as possible. And I would just ask: Please, don’t spend precious city resources on a 90-day solution that goes nowhere to ending homelessness.”

For Mills, though, the problem needs to be dealt with now. Reached yesterday, he talked again about the level of crime and general out-of-controlledness of the Devil’s Playground encampments, and he reiterated a statistic he presented to the City Council Tuesday night: Adding up the urine and human feces produced by Devil’s Playground campers, an estimated 150,000 pounds of human waste are being deposited willy-nilly on the shores of Humboldt Bay each year.

He also said that the temporary campground would serve as a triage center to get people into the Multiple Assistance Center, once it is fully converted. He said he wants the Devil’s Playground residents to be first in line when the new MAC opens. Having people pre-screened and located in a sanctioned campground would smooth the transition into the center.

To that end, city staff has gone ahead and identified four sites where a sanctioned camp — or several camps, possibly — might be located during the interim period between the end of camping at the Devil’s Playground and the MAC’s relaunch. They are:

All of these places are in the city’s coastal zone. That makes sense, on one level: There are few vacant spots in the city that are both large enough for such a campground and outside the coastal zone, and any such spot that might be found would inevitably next to or inside a residential neighborhood, making the campground politically unfeasible.

But developing an official campground in the coastal zone — even a temporary campground — is bureaucratically far more complicated than it would be in an upland area, thanks to California’s Coastal Act, which gives the state Coastal Commission a lot of input into what can be built near the shoreline. And no matter what type of facilities are actually at the temporary campground, it would indeed be considered “development” under the Coastal Act — any type of change of the use of land in the coastal zone, or in the density or “intensity” of use, is considered “development.”

On the surface, it would seem like the Local Coastal Program makes the process easy for the city. If city staff wishes to go forward with the campground, can’t it just issue itself a coastal development permit to build one?

It’s not so simple. In the first place, there is an established procedure for reviewing coastal development permit applications. City staff have to prepare an official project application, then conduct a review of the environmental impacts of that application. It must hold a public hearing. And it must, in the end, decide whether the project is compatible with the zoning regulations in the city’s local coastal program.

Zoning maps and permitted uses for Eureka’s shoreline can be found in the city’s “Coastal Land Use Policy,” which forms a part of the city’s operating general plan. There is no specific mention made of campgrounds or emergency shelters as permitted uses in any of the designated zones along the coast. Either the city will have attempt to shoehorn the campground into one of the existing definitions of “permitted use” — making the project extra-appealable, if anyone should so wish — or else it will have to go back to the Coastal Commission to seek an amendment to its zoning map. Or else it will have to attempt to sidestep the law completely.

Even if everything runs as smooth as possible, a June 1 opening date for a city-sanctioned campground seems extremely optimistic.

“That would be a very quick timeframe,” Bob Merrill, the Coastal Commission’s North Coast District Office Manager, told the Outpost yesterday. Merrill said that he could not speculate about whether or where the temporary campground might run afoul of the California Coastal Act, or what hoops might need jumping though, as he had not yet seen any specific plans from the city.

Mills said he is hoping for big community buy-in for the temporary camping facility, and that includes buy-in from those agencies charged with administering the California Coastal Act. As he sees it, the coastline is under environmental attack right now — all that human waste, seeping into the bay — wouldn’t a clean, maintained campground with facilities be an improvement?