Welcome to Humboldt county, circa 1876.

Reddit user Snowhorse420, who has been featured in Deep Web before, is a serious bigfoot enthusiast. So serious, in fact, that he’s been thumbing through old newspapers in hopes of finding historical ‘squatch sightings. So far, no luck.

However, his fruitless tenacity leads you to a glimpse of Humboldt 140 years past from the old Humboldt Standard.

While these crimes may be similar to what we see in headlines today, the coverage of said wrongdoing steals the show.

But as you relish this long-dead reporter’s flowery prose, bear in mind how much sheer labor it took to print this ornate coverage. Local letter-presswoman Lynn Jones told KHUM today that each paragraph could take 15 minutes to arrange by hand. Letter by letter, y’all.

Since Thomas Edison wouldn’t patent his carbon filament light bulb until three years later, picture a gaslit, redwood-framed room in Eureka full of typsetters cursing the writer’s lack of brevity. [Whereas I just read the articles aloud to my phone, which then transcribed it and emailed the text to me for copy/pasting. So lazy.]

CHECK FRAUD FROM A FREQUENT FLYER

Michael Doherty, the man who was convicted last week by Police Judge Howard and sent to jail for 25 days for obtaining money under false pretenses, is in trouble again. It now comes to mind that he is accused of forging John Green’s name to a note of $100 and getting money on it.

For this little transaction he will doubtless spend some further time in jail. It is also ascertained that once Fitzpatrick’s name has been forged to a note for a similar amount and as Michael seems to have a weakness for this nefarious way of procuring coin, he runs a fair chance of being held responsible for the last act.

A second offense of this character, we are told, entitles the victim to a free ticket to San Quentin, so the chances are Doherty stands a good show of having an opportunity of inspecting the walls of state prison, or going to Folsom and learning the stone-cutters trade without charge. 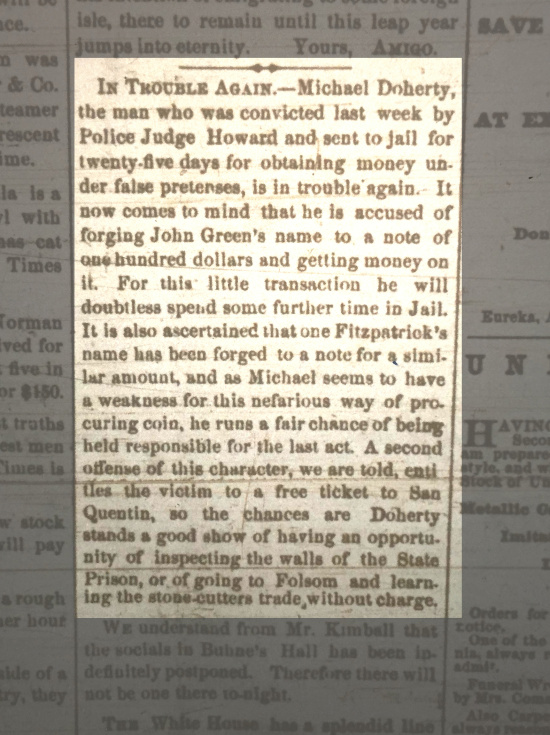 We hear that the youth who is expelled from school the other day will be arraigned for attempting to use a deadly weapon. There is also a case of forgery, we believe, and one or two cases of vagrancy.

One of these is most deplorable, as the subjects have become objects of charity through a use of opium and other intoxicants, and the prospects are that they will have to be at the county’s expense. 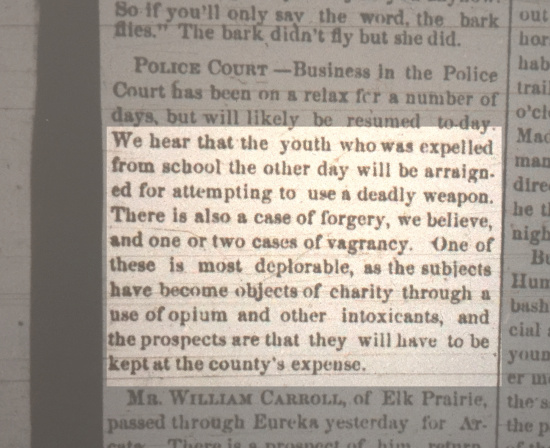 Two men who have been at swords points here for sometime, met in a store the other day. Unpleasant words ensued, which were followed by blows. In the struggle one seized the other by the throat and threw him to the floor, but greatly to the disappointment of the lookers on, and your correspondent in particular, neither of the pugilists drew blood.

I would have had no personal feeling to gratify in chronicling the death of either, but when a reporter of a paper hears of a fight he heralds the news with a sort of fiendish delight, so you know how sorry I feel for not being able to give you a better item on this subject. 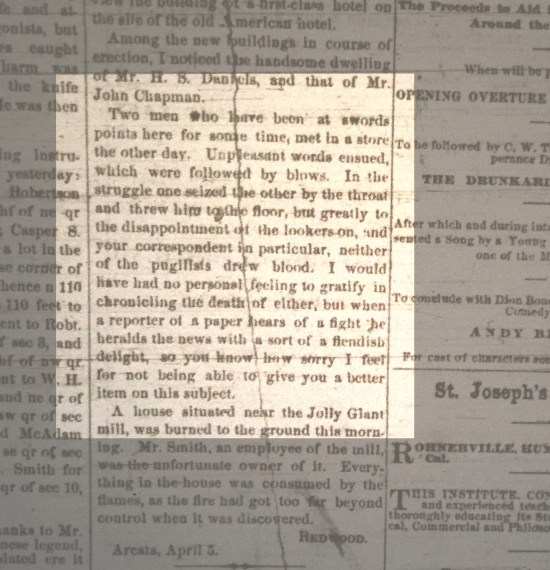 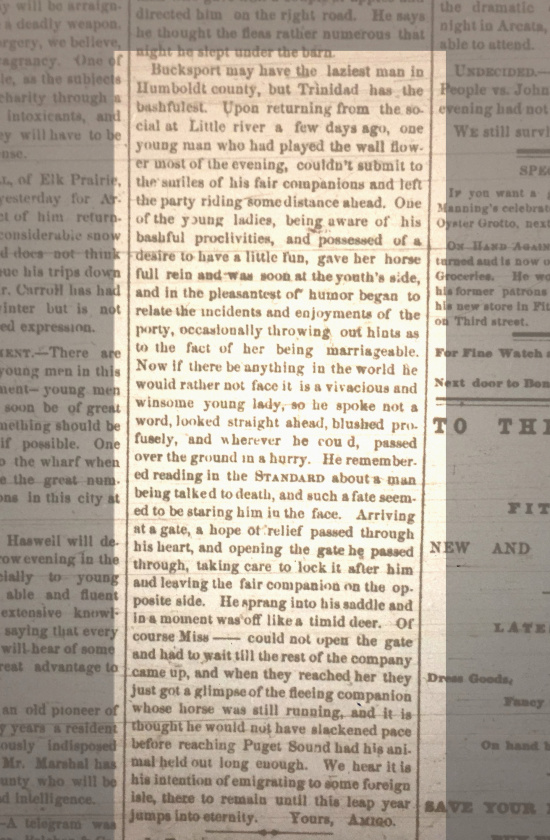 Bucksport may have the laziest man in Humboldt County, but Trinidad has the bashfulest.

Upon returning from the social at Little River a few days ago one young man who had played the wallflower most of the evening, could not submit to the sullies of his fair companions and left the party riding some distance ahead of one of these young ladies, being aware of his bashful proclivities, and possessed of a desire to have a little fun, gave her horse full reign and was soon at the youth’s side, and in the pleasantest of humor began to relate the incidents and enjoyments of the party, occasionally throwing out hints as to the fact of her being marriageable.

Now if there is anything in the world he would rather not face it is a vivacious and winsome young lady, so he spoke not a word, looked straight ahead, blushed profusely, and where ever he could, passed over the ground in a hurry.

He remembered reading in the STANDARD about a man being talked to death, and such a fate seemed to be staring him in the face.