« VIDEO: Look How Happy These Dogs Are About the Grand Opening of the Eureka Dog Park

EPIC Convinces Feds that Spotted Owl May Be Endangered » 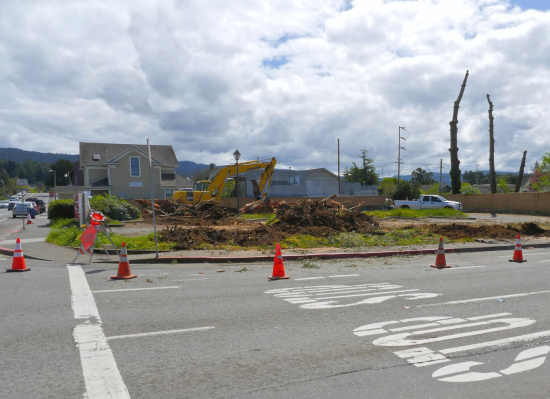 Several downtown Arcata-based friends o’ the LoCO have written today, to ask us, essentially: Why are they taking out all those trees? I don’t like it at all!

We hear you. As you can see in the picture above, there has been quite a bit of felling throughout the day at and around the city-run parking lot at Seventh and G streets. As best we can tell, the damage includes three eucalyptus and eight pines, all of which were pretty old and big before they were taken down.

This afternoon, Netra Khatri, the city of Arcata’s assistant city engineer, took a moment to tell the Outpost what was going on. There are basically two parts to the story.

Back in 2012, the city of Arcata applied for and eventually received a state grant aimed at reducing the strain on its stormwater system. Specifically, the city was looking at “low impact development” projects that would remove some of the impervious blacktop in a couple of parking areas, replacing it with porous material. Other design features would be added to “infiltrate, retain, evaporate and treat storm water … prior to it discharging via storm drains to salmonid-bearing Jolly Giant and Campbell Creeks,” as one city council agenda item put it.

Sadly, Khatri said, the work on the first phase of the project – refurbishing the parking lot at Seventh and G, which started yesterday – necessitated the removal of the lot’s three eucalyptus trees. The trees’ roots had been lifting up the sidewalk and generally wreaking havoc with the surface, and they would surely interfere with the new stormwater-friendly design. So they came down.

In the meanwhile, the landowner to the south to the parking lot took advantage of its temporary closure to take out her eight big pine trees, which presumably were causing similar problems on her own grounds. She would have had to ask the city to close the lot to take the pines down at any other time, Khatri said; this way, she avoided the time and expense that process would have otherwise taken.

The initial scar on the landscape may jar many Arcata residents, most of whom have a thing for trees. But Khatri believes that the updated, eco-friendly design of a key piece of city infrastructure – a dumb old parking lot, made less dumb – will soon win them back over.

“I’m glad to hear that people are concerned about the trees in the city,” he said. “But once the project is done, it will look really good.”

Below, please find a video from frequent LoCO contributor Chad Johnson, plus other reader-contributed photographs. 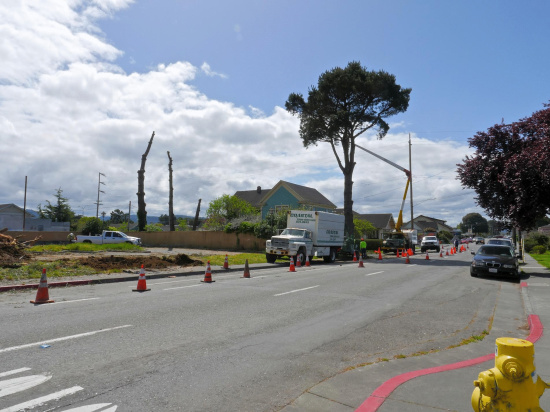 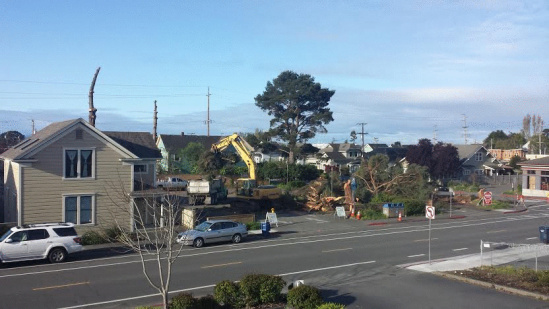