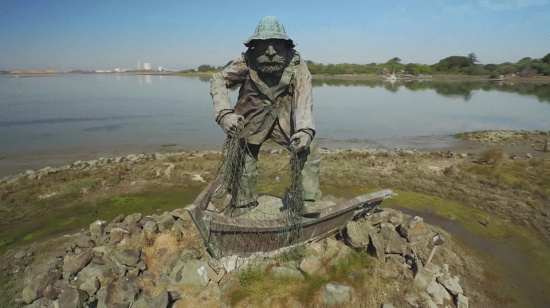 Last week the Outpost took a look at the larger context for this year’s Humboldt County Harbor, Recreation and Conservation District elections, plus a preview of the race in the 1st Division. Monday we looked at the two candidates in the 2nd Division. And today we’re looking at the three-way race for the 5th Division seat.

Though it may not be a three-way race for long. 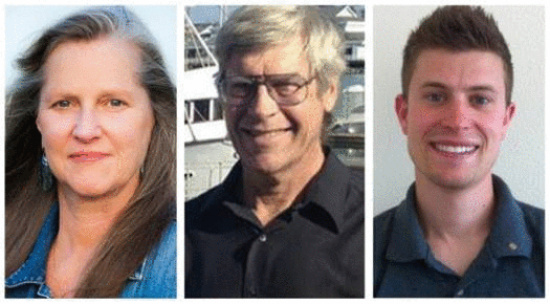 The candidates who filed for the position are fisheries biologist Patrick Higgins, who is the incumbent, commercial seafood businessperson Susan Rotwein and local business owner Kyle Visser.

Visser owns Shred Aware (formerly Shred Tec) and Bio Waste Resources. His dad was a commercial fisherman, and Visser told the Outpost he’s concerned about making keeping that industry viable while ensuring environmental sustainability. But he also said he’s not likely to see his candidacy through to Election Day.

“Susan [Rotwein] has very similar views as I do,” he said. “In truth I’ll probably end up stepping out of the race … and ask people to vote for her.”

Visser added that he has yet to speak with Rotwein personally, so he’s reserving the right to stay in the race. If he does so we’ll examine his positions in greater depth. Until then, here’s a look at the other two candidates in the 5th Division, which covers the vast northern portion of the county, encompassing McKinleyville, Trinidad, Willow Creek and Orleans.

Higgins said he’s happy to have any challengers at all. Four years ago the incumbents in the 1st, 2nd and 5th Divisions all ran unopposed. “I just don’t think the public is informed when there are not challenges,” he said.

Higgins was first elected in 2007, handily defeating 24-year incumbent Charles Ollivier, a retired longshoreman and faithful railroad development advocate. His positions haven’t changed much since then, he said. Namely, he takes a diversified approach to stimulating the local economy, “as long as the enterprises we foster do not compromise the health of the bay,” he said.

A fisheries biologist by trade, Higgins can speak at length about riparian zones, estuary studies and the ecological repercussions of the Klamath Basin Restoration Agreement (of which he is not a fan). As a Harbor Commissioner Higgins said he’s proud of the District’s acquisition and cleanup of the former Samoa Pulp Mill site, whose stores of toxic pulping liquors represented “the greatest threat to the health of the bay.”

He’s confident that the site can be utilized now to develop an array of enterprises, from aquaculture and wood products companies to a marine research facility run by Humboldt State University. Having hosted two economic development conferences locally, Higgins said he’s been convinced of the economic power of tourism, and, to that end, he’d like to see the District emphasize recreation.

Specifically he’d like to see more progress on the Humboldt Bay Trail. “We could draw tourists from throughout the region — and the world — to enjoy the Bay while strolling or riding bike,” he said. “It would cut down on fuel costs. We could utilize the railroad bed to send the trail down to the [Humboldt Bay National] Wildlife Refuge, if not to Fortuna. Then kids from Eureka could go on bikes to College of the Redwoods.”

“I had predicted that if we had not gotten a new [CEO] we would have gone bankrupt by 2014,” Higgins said. “Instead we’re trending toward the black, and I think the health of the District, the morale of staff and the perception of the public have improved in the last four years.”

Higgins acknowledges that a “substantial constituency” of the Harbor District is in favor of pursuing a new east-west rail connection up and over the Coast Range to the Central Valley. And while he personally supports rail transit in concept, he doesn’t see it as a realistic prospect for Humboldt Bay.

“If we were Japanese or Canadian the expenditures would be borne by society,” he said. “But because our society is different I don’t believe the railroad is forthcoming. To us [that pursuit] represents lost opportunities, because things that are more feasible are not being pursued.”

Challenger Susan Rotwein said she has “no opinion in either direction” on the train issue. In a phone conversation last week she said other issues, such as regular dredging, are paramount. Owner of a fishing boat as well as Cap’n Zach’s Crab House in McKinleyville, Rotwein said she was encouraged to run by local fishermen, who felt they didn’t have enough of a voice on the Harbor Commission.

Like fellow challengers Larry Doss and Nick Angeloff, Rotwein launched her campaign with a press release penned by former Reagan advisor/Eureka Reporter editorial page editor Peter Hannaford. In that release she was quoted saying, “The Harbor Board lacks a long-range plan that focuses on jobs. Once put into action, such a plan can increase District revenue which, in turn, can strengthen its recreation and conservation programs.

“Instead the Harbor District has gone heavily into debt over the cleanup of the pulp mill and has devoted much of its attention to seeking grants for revenue.”

The latest financial statements show that, while the District took a $1.25 million loan from Coast Seafoods to finance transportation of toxic pulping liquors, its net position remains in the black. However, the District continues to lose money each year, though not at the clip of eight or nine years ago.

Rotwein’s release also said the Commission needs to develop “a long-range plan that focuses on jobs” and work with the private sector to build a new cold storage facility.

“The press release is only part of the story for me,” Rotwein said over the phone. In addition to owning a fishing boat and Cap’n Zach’s, she’s also an HSU graduate and has worked as a public health nurse with the native community for 30 years, she said.

Rotwein has experience as an elected official. While serving on the Trinidad City Council and Planning Commission in the 1990s, she said, she helped lay the groundwork for the city’s septic maintenance district.

Her first priority is the environment, she said, noting the bay’s eelgrass ecosystem, which hosts a wide variety of migratory birds. “It’s a jewel.” But ultimately she returned to the topic of jobs, saying the District’s dredging of the harbor has not been frequent enough, which costs the community money.

And regarding the former pulp mill site, Rotwein said she’s still looking into the issues there but suspects the Harbor District “may have bitten off more than it can chew.”