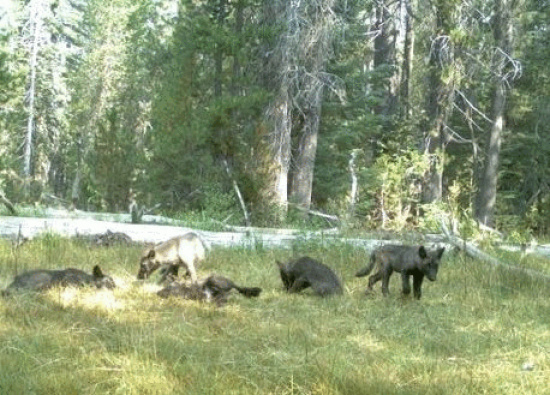 Photos courtesy of California Department of Fish and Wildlife

Scientists are calling it an ecological breakthrough: Two adult wolves and five cubs were recently photographed in Siskiyou County, the first known wolves in California since 1924 (with the exception of the famous wandering OR7, who wound up settling in Southern Oregon).

Here’s more information from the California Department of Fish & Wildlife:

After trail cameras recorded a lone canid in May and July, CDFW deployed additional cameras, one of which took multiple photos showing five pups, which appear to be a few months old and others showing individual adults. Because of the proximity to the original camera locations, it is likely the adult previously photographed in May and July is associated with the group of pups.

“This news is exciting for California,” said Charlton H. Bonham, CDFW Director. “We knew wolves would eventually return home to the state and it appears now is the time.”

CDFW has designated this group (comprised of two adults and five pups) the Shasta Pack.

Wild wolves historically inhabited California, but were extirpated. Aside from these wolves and the famous wolf OR7 who entered California in December 2011, the last confirmed wolf in the state was here in 1924. OR7 has not been in California for more than a year and is currently the breeding male of the Rogue Pack in southern Oregon.

CDFW is completing a Draft Wolf Management Plan and will release it soon. Throughout the plan’s development, CDFW has held numerous meetings with stakeholders. Currently, CDFW is incorporating comments from a stakeholder advisory group, and considering revisions due to implications of this news, before releasing the draft plan to the general public. Public meetings will be scheduled to receive public comment on the draft plan.

In addition to the trail cameras, CDFW relies on help from the public to glean information about wolves in California. The public can report wolf sightings on CDFW gray wolf website atwww.wildlife.ca.gov/Conservation/Mammals/Gray-Wolf/Sighting-Report.

Though wolves rarely pose a direct threat to human safety, CDFW recommends that people never approach, feed or otherwise disturb a wolf. For more information about staying safe in wolf-occupied areas, including what people should do if they encounter a wolf, please visit www.wildlife.ca.gov/Conservation/Mammals/Gray-Wolf/FAQ. 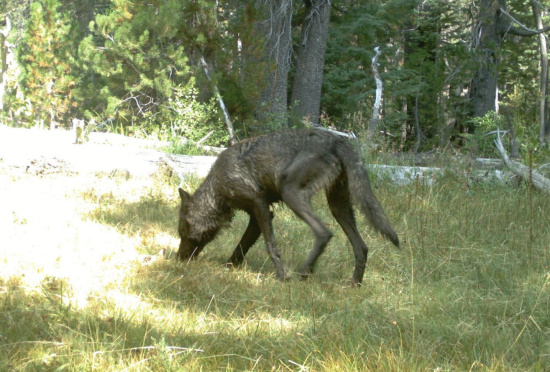