« Your Week in Ocean: SCRAP Humboldt and A Scrapped Humboldt Bay Power Plant

Fire Updates: List of Communities with Hazardous Air Conditions and How to Create a Clean Room to Breathe In » 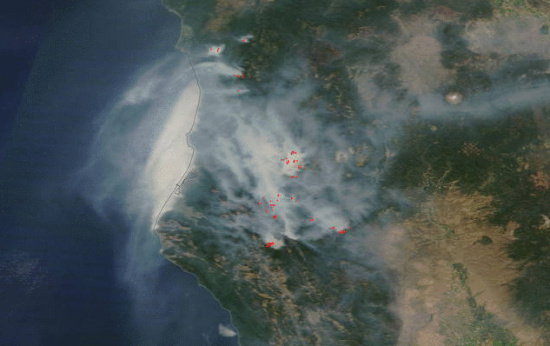 The view from the ground has been surreal lately, with the smoke-obscured sun casting a sepia pall over our summer days. But the view from space is far more revealing.

Click on over to NASA’s website for a high-resolution version of the photo. Here’s what NASA folks have to say about it:

NASA’s Terra satellite saw a blanket of smoke over northern California from five large fires burning in the region.

The River Complex, Route Complex, South Complex, Fork Complex and Mad River Complex fires are raging over a large area of the Shasta-Trinity National Forest, located west of Redding, California. To the north is the Nickowitz Wildfire and Gasquet Complex Wildfire, just south of the Oregon state line. …

This satellite image shows the large plume of smoke from the various fires on August 17, 2015. The Moderate Resolution Imaging Spectroradiometer (MODIS) instrument that flies onboard NASA’s Aqua satellite captured an image of smoke from these fires August 17. The multiple red pixels are heat signatures (red) detected by MODIS. The smoke appears to be a light brown color.