WALKING HUMBOLDT: Piece by Piece, the Humboldt Bay Trail is Coming Into Existence 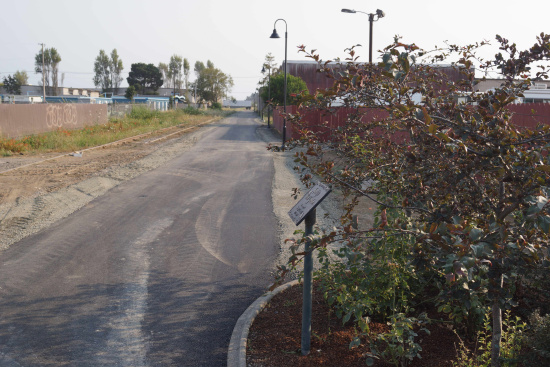 Walking for pleasure is a rather recent development in the human experience. As a result, the infrastructure for pedestrian activity has really only taken hold in the past half century and, as any of us who have visited Los Angeles or Kansas City or Dallas can attest, most communities remain staunchly car-centric. Sidewalks are inconsistent. Freeways prevent passage of walkers. Quality multi-purpose paths are few and far between.

I am excited by the efforts that have been made by local governments, non-profits and some federal agencies to develop both walking and multi-user trails here in Humboldt County. Much has happened this summer (and will continue to happen over the coming years).

I would like to provide a briefing on some of the news. I will break my update into three installments over the next week, with the first focusing on the Bay Trail and its various components. The second installment will focus on the Arcata Ridge Trail, McKay Community Forest and the Annie and Mary Trail. The final installment will cover the trail system in the Bureau of Land Management’s Lacks Creek complex east of Redwood Valley, the new Freshwater Farms Reserve Trail and activity in the Little River and Manila areas.

The proposed Humboldt Bay Trail stretches from central Arcata to south Eureka, a distance of about 13 miles. The Bay Trail is being developed as a collaborative effort between the Humboldt County Association of Governments, Humboldt County, City of Arcata, City of Eureka, Caltrans, State Coastal Conservancy, North Coast Railroad Authority (NCRA), and a variety of other agencies and organizations. When completed it will form an important strand of the California Coastal Trail and include some stunning bayfront real estate. 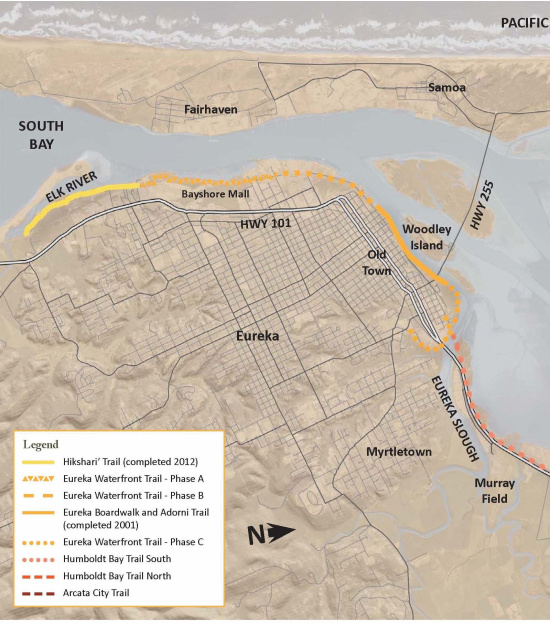 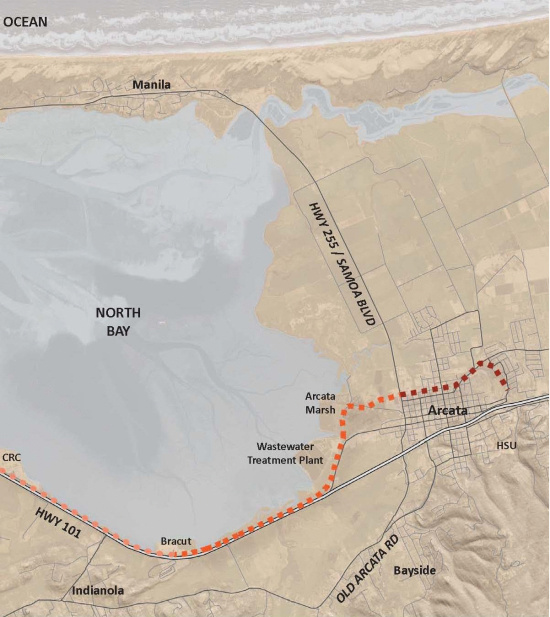 One version of the Humboldt Bay Trail, which will someday exist.

The southern-most 1.5 miles, paralleling the Elk River Slough, was completed in 2012 and is known as the Hikshari’ Trail. The northern-most 1.3 miles is the paved Arcata City Trail, a multi-modal trail from Samoa Boulevard to Foster Avenue, that will be completed later this summer. According to Mark Andre, the Director of the City of Arcata’s Environmental Services Department, just the finishing touches of electrical, signage and street markings remain to be done. The broad pathway will be well illuminated as it snakes its way from Arcata’s Skate Park, along Jolly Giant Creek north of the high school, and south through Arcata’s Creamery District to Samoa Boulevard. The Humboldt Bay Trail North, the 3.0 miles from Samoa Boulevard to Bracut through the Arcata Marsh and Wildlife Sanctuary, has funding for planning, permitting and construction. However, City of Arcata staff is working to resolve outstanding easement and permitting issues in order to begin the bidding and construction process. The intent is to complete this segment of the Bay Trail some time in 2017. This northernmost 4.3-mile portion of the Bay Trail is designed as a rail-with-trail preserving the railroad tracks and placing the trail, for much of the distance, adjacent to the railroad.

In March 2014, the County received $2 million through the State Transportation Improvement Program to complete preliminary engineering, environmental studies and permitting and to finalize engineering plans and construction specifications for the 3.8-mile section of the Bay Trail from Bracut Industrial Park to the Eureka Slough. This segment is referred to as The Humboldt Bay Trail South. An Initial Engineering Study — intended to identify constraints and develop preliminary design alternatives — was completed in 2014 and is available online. Preliminary cost estimates for right-of-way and construction range from $9 – 12 million with additional environmental mitigation costs of between $1.5 – 2.0 million. These costs are so high, in part, because this is being designed as a rail-with-trail rather than rail-to-trail (using the existing railroad prism and rail bed). None of the construction money has been obtained and the specific route has yet to be determined. This section of the Bay Trail will be the last segment completed.

The City of Eureka has three active projects underway that will complete the Eureka Waterfront Trail (Eureka’s Bay Trail) and add 3.7 miles of contiguous path way connecting the Hikshari’ Trail with the Humboldt Bay South. Miles Slattery, Director of Parks and Recreation for the City of Eureka, told me that design work is nearly complete and the permit process should be finalized within six months for all three projects. During the dry season of 2016, the trail will be built between Truesdale (the north end of the Hikshari’ Trail) and Del Norte streets (1.2 miles). The trail parallels the Bay west of the Bayshore Mall and the Eureka (aka Palco) Marsh. The remaining two projects are scheduled for construction during the dry season of 2017. 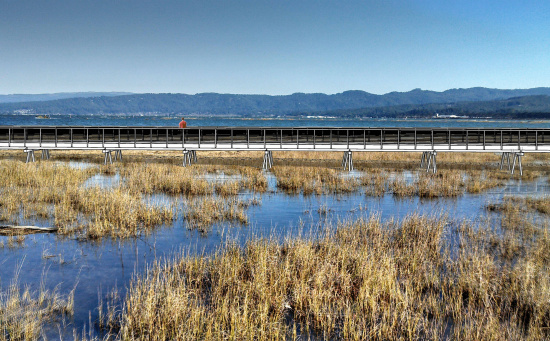 A planned causeway across the wetlands.

The trail from Adorni Park to Tydd Street (near the Open Door Health’s Eureka Community Health & Wellness Center) will include a 90-foot bridge and a 60-foot bridge and 560 feet of elevated boardwalk (see image above) across wetlands near the Blue Ox Millworks. The trail will wrap around Target along the Eureka Slough passing under the Highway 101 bridges. The terminus at Tydd Street will be upgraded substantially serving as a small park, picnic area, and trailhead. The Boat Launch area will also be upgraded and serve as a trailhead as will the area at the foot of Del Norte Street.

In sum, if all goes well, a few summers from now I will be able to walk more than 9 miles of the 13 total miles of the Humboldt Bay Trail. And there is more good news regarding other trails that I will cover in the next installment.

Rees Hughes is working on a walking guide to Humboldt County — Hiking Humboldt (Part 2): Short Day Hikes, Road and Urban Walks on California’s North Coast – that will be published by Backcountry Press as a complement to Ken Burton’s Hiking Humboldt (Part 1): 58 Hiking Adventures on California’s North Coast. He also helps with the coordination of the Volunteer Trail Stewards program, a community-based effort to support the maintenance and care for local trails.