Eureka Author Amy Stewart is the Toast of the Literary World »

[For LoCO’s chronological list of fire updates, go here. For direct updates from fire management teams as they are released, watch the Outpost’s “Elsewhere” section.] 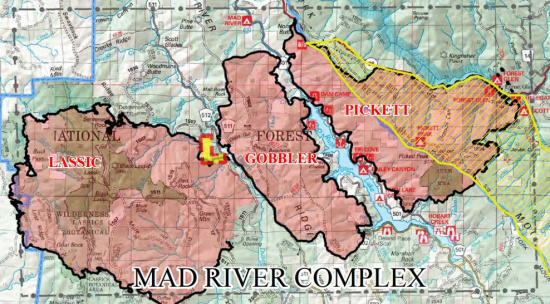 Mad River Complex fires as of this morning. Graphic: Inciweb.

The Lassic Fire, part of the Mad River Complex, was one of the few of the great July 31 lightning fires to threaten structures in Humboldt County. Early on this month, the Humboldt County Sheriff’s Office issued an evacuation advisory for fewer than a dozen homes in the Swayback Ridge area, near the Humboldt-Trinity line.

Now, after the weekend’s light rains and the hard work of fire crews in the area, that advisory has been lifted. The Lassic — which by itself grew to over 18,000 acres — is 90 percent contained, and the Mad River Complex as a whole is 95 percent contained.

The voluntary evacuation advisory in effect for the Swayback Ridge area of the Lassics since August 5, 2015, has been canceled.

The Lassic Fire, a part of the Mad River Complex, is estimated to be approximately 90% contained and does not pose a threat to the remote residential area previously under advisory. Firefighting efforts on all incidents in northwest California were assisted by rain over the weekend. There are currently no evacuation advisories or orders in effect in Humboldt County.