County Health Department Says: We Can Help You Get Home For the Holidays, But You Have to Stay There Forever »

Did You See a Long Line of People Parading Through Eureka Late Friday Night? Here’s What That Was 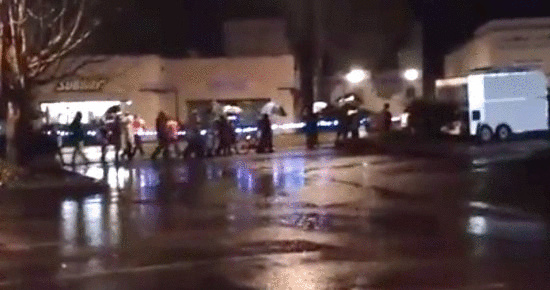 Quite a few Outposters pinged us Friday night to inquire if we knew what was up with the long march of people — some hundreds strong, according to some estimates — wending their way through the cold Eureka night.

The scene was well captured and narrated by Friend o’ the LoCO Jeff Osborne, who was standing outside Myrtlewood Liquors when the procession passed.

“Protestors??” wrote another of the LoCO faithful the next morning…

I was at a stop light on myrtle and west street last night and they were walking in the road. I snapped a few photos before the light turned green. Just curious if anyone knows what exactly they were doing. There was no sign of an accident and there were children amongst them as well.

Sorry it’s taken us a few days to get back to you on this, but we wanted to nail it down — this was not a protest, which is apparently the first thought anyone has when seeing a large group of people on foot in the streets of Eureka, but a posada.

Posada? Yes! That’s the Yuletide processions they do all throughout Latin America to reenact the Blessed Mother Mary’s barely successful search for shelter on the eve of Jesus’ birth. There’s a whole tradition around the nine days of posadas in Mexico and elsewhere, involving songs and sweets and general holiday revelry. Wikipedia can tell you all about it.

The posada held in Eureka Friday night — the first one ever organized by Sacred Heart Church on Myrtle, according to the nice but shy lady who answered the phone there this morning — sounds like it was was a more spiritual and solemn affair, and they only did it the one night instead of nine.

She said that local Catholics gathered at St. Bernard’s Church in downtown Eureka Friday night — the eve of Our Lady of Guadalupe’s saint’s day — and proceeded from there to Sacred Heart on Myrtle. The string of lights, she said, were as much to keep posada-walkers safe as they were for seasonal cheer. People of all ages participated, she said. There were lots of baby strollers.

They arrived at Sacred Heart just before 11 p.m., the lady told us, whereupon “there was a wonderful beautiful mass in honor of Jesus and our Blessed Mother.”