Did You See a Long Line of People Parading Through Eureka Late Friday Night? Here’s What That Was » 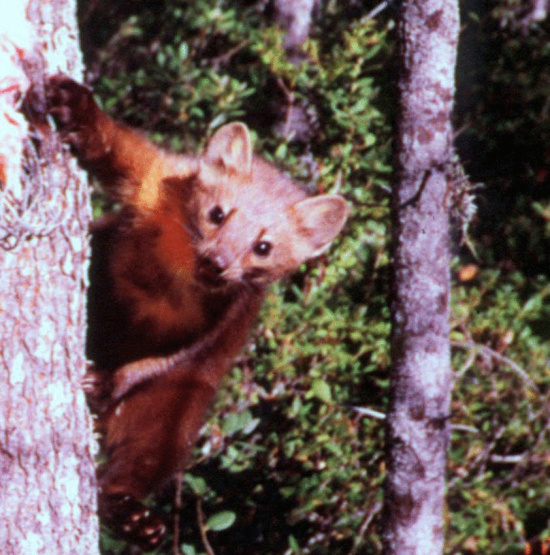 The Center for Biological Diversity and the local Environmental Protection Information Center (EPIC) today filed a lawsuit against the U.S. Fish and Wildlife Service for failing to award protected status to the coastal marten, a member of the weasel family, under the Endangered Species Act

Here’s a press release from the Center for Biological Diversity:

Two conservation groups today sued the U.S. Fish and Wildlife Service for failing to protect the coastal marten under the Endangered Species Act. The Center for Biological Diversity and the Environmental Protection Information Center first petitioned for protection for the coastal marten, sometimes known as the Humboldt marten, in 2010. Represented by Earthjustice, the groups are now challenging the Service’s April 2015 decision not to award federal protection to the marten.

The bushy-tailed carnivores were once common, but now fewer than 100 of them survive in California, while an unknown but very small number are still found in Oregon. A slender mustelid related to minks and otters, the coastal marten survives only in three isolated populations in old-growth forest and dense coastal shrub in Northern California and southern and central coastal Oregon.

“The science clearly shows that the coastal marten deserves protection under the Endangered Species Act, but the agency ignored its own scientists in making the political decision to betray the marten,” said Tierra Curry, a senior scientist at the Center for Biological Diversity and lead author of the petition to protect the marten.

The marten faces a barrage of threats, including logging, fire, climate change, trapping in Oregon, vehicle strikes, rodenticide poisoning and small population size. In denying the marten protection, the Service ignored the best available science, including its own scientific report. In the past year, the agency has come under increasing criticism for overruling its own scientists and too often bowing to political pressure.

“We’re dealing with an animal that is already extinct throughout more than 83 percent of its historic range. It’s like discovering that the ivory-billed woodpecker still exists, yet refusing to protect it,” said Greg Loarie, an attorney for Earthjustice representing the groups. “If they’re going to survive and recover, coastal martens desperately need the protection that the Endangered Species Act provides.”

“The Service’s decision not to protect the coastal marten is scientifically and morally unjustifiable,” said Rob DiPerna, EPIC’s California forest and wildlife advocate. “The marten is a special part of the natural heritage of the Northwest and deserves full protection.”

The coastal martens’ historic range extended from Sonoma County in coastal California north through the coastal mountains of Oregon; in Oregon the marten now lives only in a small area within Siskiyou and Siuslaw national forests. Coastal martens were believed extinct in California — with 95 percent of their old-growth forest habitat lost and a history of excessive trapping — until they were rediscovered on the Six Rivers National Forest in 1996. In 2009 the first California marten to be photographed in recent times was detected in Prairie Creek Redwoods State Park by remote-sensing camera.

The extremely secretive animals are known for their slinky walking motion and expert hunting skills. Typically about 2 feet long, with large, triangular ears and a long tail, they eat smaller mammals, berries and birds, and are preyed on by larger mammals and raptors.