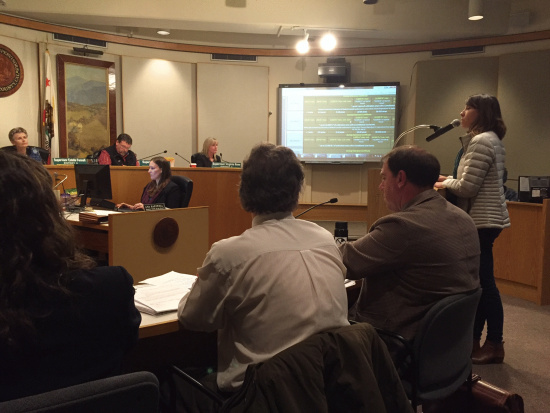 Natalynne DeLapp, executive director of EPIC, addresses the Board of Supervisors at Tuesday’s meeting.

Yesterday afternoon, when the Humboldt County Board of Supervisors got to the agenda item concerning the proposed Medical Marijuana Land Use Ordinance (MMLUO), the first public speaker summed up the challenge facing our county leaders.

“You’re being asked to create a regulatory framework for a whole industry by March,” said Peter Childs with the Humboldt Mendocino Marijuana Advocacy Project (HuMMAP). His tone said, “glad I’m not you.”

Indeed, the board is rushing to get a regulatory framework in place before March 1, a deadline set by the state government. The recently passed Medical Marijuana Regulation and Safety Act says any city or county without its own cultivation regulations in place by that date will have to defer to the state as the sole licensing authority.

The challenge in crafting a local ordinance, as Supervisor Rex Bohn noted, is establishing rules that aren’t so strict that none of the county’s established growers feel compelled to follow them and yet not so lenient that they allow the industry’s environmental damage to continue unabated.

The supervisors aren’t being asked to create that framework from scratch. Back in October county staff came up with a first draft, drawing in part from an ordinance hammered out over several months by industry group California Cannabis Voice Humboldt (CCVH), and since November the county Planning Commission has made a variety of changes to that draft over the course of 10 public meetings.

Yesterday the Board of Supervisors couldn’t take any action on the ordinance, since it hadn’t been properly notified as a land use hearing item, so instead, staff explained, the hearing served to memorialize the transition from the Planning Commission to the board. It also gave the public its first chance to tell the board what it thinks of the Planning Commission’s draft.

As the Outpost reported briefly yesterday, the vast majority of public commenters criticized the current draft, saying it’s too permissive in its concessions to growers and suggesting it could leave the county vulnerable to litigation under the California Environmental Quality Act (CEQA).

It should be noted that the Planning Commission wasn’t unanimous in its passage of the current draft. The vote was 4-1, and the dissenting commissioner, Noah Levy, submitted a letter to the board explaining why he couldn’t agree with his colleagues. That letter, which you can read in full here, argued that the ordinance wouldn’t pass muster with state environmental law because the scope and variety of cultivation it permits would lead to significant environmental impacts.

(The county’s first draft proposed using a “mitigated negative declaration,” a document asserting that the project won’t have a significant impact on the environment. Any project that will significantly affect the environment requires a more thorough process under the CEQA, one that includes a full environmental impact report, or EIR. See here for more information.)

In particular, Levy questioned his fellow commissioners’ decision to allow grows of up to 10,000 square feet on many parcels and up to 20,000 square feet on the largest parcels, including land zoned for timber production (TPZ). Allowing the latter would have significant environmental impacts, Levy argued, especially given the fact that the Planning Commission draft ordinance included no limit on the total number of permits the county could issue. Nor did the draft adequately address likely watershed impacts, Levy stated.

Many others echoed Levy’s concerns, both in letters submitted to the board and in comments offered at yesterday’s meeting. One letter was submitted by an unexpected coalition that included environmental groups such as the Environmental Protection Information Center (EPIC), the Northcoast Environmental Center (NEC) and the Mad River Alliance, plus four medical cannabis organizations and a forestry consulting company. (Read that letter here.)

That unlikely alliance called for stricter rules, including:

Speaking to the supes yesterday, NEC Board President Larry Glass questioned the legality of the current draft.

“I don’t know what [county] counsel advised you, but my experience says there’s no way this would fly as a neg dec. Probably the original document [would have], but this [draft] has blown it wide open. If you want to do full CEQA analysis, that’s fine with us,” he said, triggering some chuckles, “but that’s not what you have in mind.”

Natalynne DeLapp, executive director of EPIC, said her group’s primary concern is the conversion and fragmentation of forestlands, and she again called for a cap on the total number of permits issued.

Environmental scientists also weighed in with their disapproval. Gordon Leppig, supervisory environmental scientist with the California Department of Fish and Wildlife, said the current draft would promote expansion of the industry, and with water scarce in local fisheries that would have a negative impact on salmon and other aquatic species. “This ordinance as written will have significant harmful effects on the county’s forests, watersheds, fish and wildlife,” Leppig said.

Matt Goldsworthy with the National Marine Fisheries Service phrased the concern more bluntly. “I’m hear to speak for the fish,” he said. “They really like water. They live in it.” His agency is troubled by the lack of minimum flow guidelines for local waterways. “Our recovery plans all indicate that water diversions and all other marijuana activities are a high threat — or the biggest threat in some waterways, particularly the Eel River.”

Other speakers called for limiting the maximum grow size. Environmental attorney Paul Hagen, for example, noted that this region’s longtime growers, the ones who respect the environment and “know their stuff” when it comes to cultivation, should be the ones served by a local ordinance, not the Johnny-come-lately profit hounds. (Paraphrasing there.) Keep grows small to incentivize quality over quantity, he said. “Large gives you Pabst Blue Ribbon beer and Pall Mall cigarettes.”

And, in what felt like a throwback to weed debates of yesteryear, there was one speaker who touted marijuana as a virtual panacea and another, former supervisor candidate Karen Brooks, who said weed has spawned a “criminal, lawless culture” and an industry that should be treated “as if it is a toxic activity.”

When the matter was brought back to the Board of Supervisors, they took turns making comments about the situation. As noted above, they weren’t able to take any action on the ordinance (and several supervisors joked that they’ve hardly had time to absorb all the materials and comments anyway). But still, they had a chance to speak their mind, and as SoHum cannabis activist Robert “Woods” Sutherland put it in an email after the meeting, “Here several Supes laid their cards on the table.”

Fifth District Supervisor Ryan Sundberg seemed reluctant to take the advice of the day’s speakers. “In general,” he said, “one of my basic hopes is that we’ll create a framework that brings in as many people as possible.”A cap on the total number of permits would run counter to that goal, he suggested. He also said he’d be loath to prohibit cultivation on timber production parcels. “There’s a lot of grows on TPZ land,” he said. “Ignoring that is not the right thing to do.”

However, he suggest “maybe” requiring a Conditional Use Permit for grows on TPZ parcels.

And as for the complaints about the mitigated negative declaration being insufficient, Sundberg said he’d double check with county counsel but would not be intimidated. “I don’t have any problem being challenged,” he said. “I wouldn’t want to back down from threats of a lawsuit; it just doesn’t scare me.”

Third District Supervisor (and frequent Sundberg foil) Mark Lovelace countered that the goal shouldn’t be to survive a legal challenge but rather to avoid one. “If it’s challenged,” he said, “we miss that March 1 deadline.”

There was also some discussion about the concept of using the Humboldt Heritage brand to label and market marijuana that’s been cultivated in compliance with local regulations and whether that should be the purview of the ordinance or the county agricultural commissioner. And Second District Supervisor Estelle Fennell suggested her fellow board members compile a list of things they’d like to bring up at the next hearing on the MMLUO.

“We still have a very daunting task ahead of us,” she said.

The next Board of Supervisors hearing on the Medical Marijuana Land Use Ordinance will be held Jan. 5.

Note: This post has been updated from an earlier version to include a more complete quote from Supervisor Sundberg.