(UPDATE: 50% Just Kidding) The End for Luke’s Joint and The Other Place » 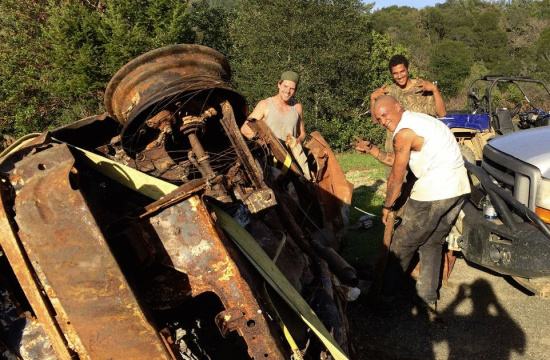 Volunteers winch up an abandoned car from an illegal trash dump over a steep hillside near Alderpoint as part of a massive garbage clean up in Southern Humboldt. [Photo by Chris Anderson.]

Back in November after someone dumped thousands of burned butane canisters onto an illegal dump east of Alderpoint, residents despaired of ever seeing them cleaned up. Then, in January, one man, Nocona Mendes, brought his dump trailer as well as a crew of family and friends to pick up the trash visible from the road. Alderpoint residents joined in. Then, like a baton passing, another group came and cleaned up the next Sunday. Then, a week later, more volunteers showed up. And, again this Sunday, volunteers from the earlier groups showed up and hauled out thousands of pounds of garbage including the car shown above.

Chris Anderson, who has been at most of the cleanups, posted photos of the experience and wrote, “Almost brought me to tears to work with such good folks and accomplish what we set out to…. Worked till 4 this afternoon on the car… I say winched out but it was a whole lot of man work to get that thing out as well.. Much love to all of u participating in any way!!! We are doin this!!!!”

The momentum is still there to remove even more garbage. Anderson says he and others have plans to winch out more cars and remove them from the area next week.

Amy Machado, the dynamo behind other cleanups in SoHum, has put a call on the Eel River Cleanup Party page to get even more of the garbage in this dump. She wrote, “The clean-up Round 4 next Sunday!! Spread the word!! …[C]alling out to tow truck companies, fire departments, rescue teams…[Bring yourself] passion, drive and a love for our community, land and water!!!

After the cleanup a week ago, almost all the butane cans had been removed. Who would have thought in November that, one canister at a time, beauty would return to the area? Now, the volunteers have moved beyond the original goals and are beginning to pull out vehicles. One canister at a time. One car at a time. 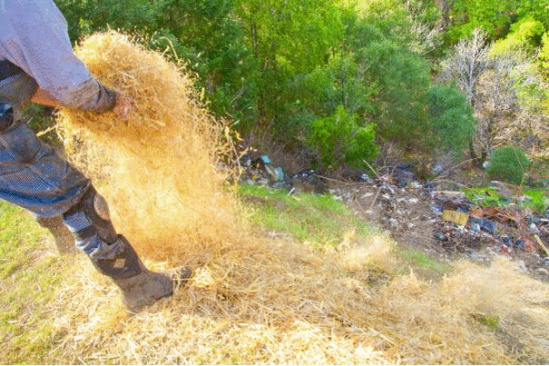 Spreading hay after the cleanup last week. Each week, more land is reclaimed from the dump by volunteers. [Photo by Kym Kemp.]