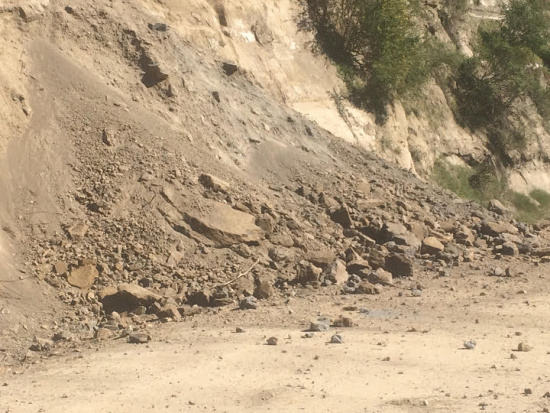 The slide is still flowing. Rocks continue to roll down the steep slope. [Photo provided by Denton Carrick.]

Redwood Drive has been shut down between Garberville and Redway until further notice. According to Supervisor Estelle Fennell, Redwood Drive can’t be opened for some time. She posted on her Facebook page around noon today, “I just spoke with Public Works Director, Tom Mattson and the news is not good: the area that the original large boulder came from continues to erode creating numerous random rockslides that make it too dangerous to allow regular traffic in that area.”

According to Denton Carrick of Humboldt County Public Works, the slide is still moving. “I had my guys in there this morning and stuff was still coming down,” he said. “It was dangerous.”

He said that the Caltrans’ blasting crew came down and looked at the situation but, Carrick said, “There was nothing they could do.”

Blasting isn’t the only option but none of them are cheap. Supervisor Fennell posted that several options are being explored including containing the slide with metal nets. A similar strategy was used on Confusion Hill before the bridges were built. “[I]t may be an expensive fix (as much as $1.5 million!),” she stated.

There is some hope that the slide might stabilize on its own but, Carrick said, “Right now it is pretty active.” 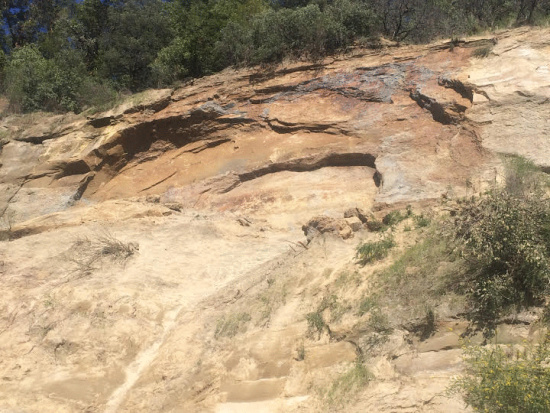 Slide material has worn a groove into the hillside as rocks tumbled down. Boulders are perched precariously above the road. [Photo provided by Denton Carrick.]