There Was Weed Inside This Carnapped Eureka Vehicle Found in SoHum » 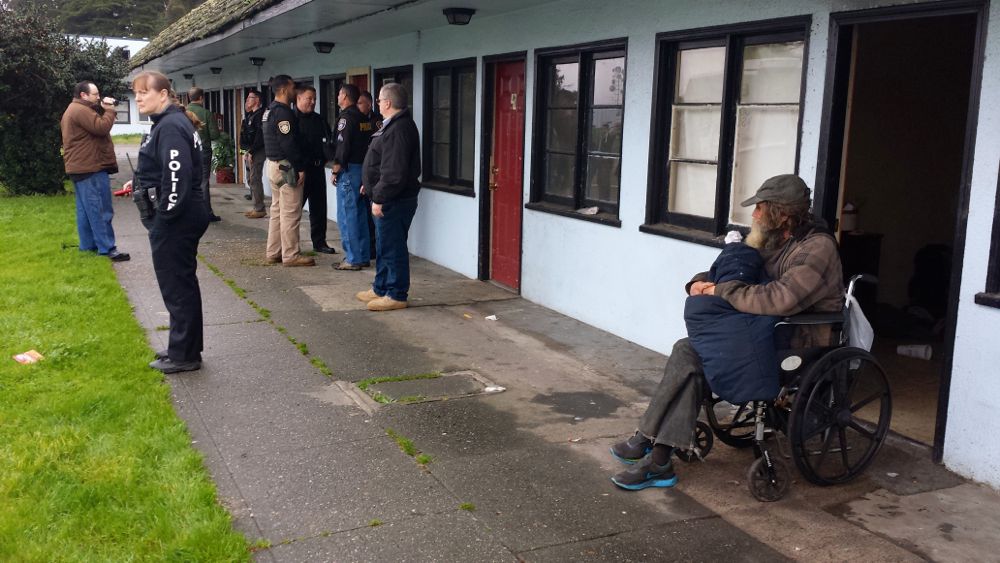 Tenants gathered their meager belongings from the dingy rooms of the Blue Heron Lodge this morning as officials from the city of Eureka’s code enforcement unit enforced an abatement order at the troublesome residence. Employees of the Humboldt County Department of Health and Human Services were also on hand to help tenants relocated to their new temporary residences.

All but one of the Blue Heron’s tenants has been placed into a local apartment or motel, according to Eureka Police Captain Stephen Watson. That last resident, Guy Anderson (pictured above), reportedly had a place lined up until the landlord saw the video posted on the Outpost last week, which documents Anderson’s history of alcoholism, depression and homelessness.

Anderson sat cross-legged in his wheelchair, gripping a blue bag of belongings and watching people mill about. “I’m just wondering where I’m sleeping tonight,” he said. “Nobody’s told me nothing.”

Anderson has been staying at the Blue Heron, located at 2245 Broadway, for the past five months.

Officers from the Eureka Police Department were also on hand, in part because someone had phoned in a threat to the FBI, Captain Watson said. The man who called in the threat has prior convictions for crimes including robbery while armed and manufacturing destructive weapons, which led law enforcement to take the threat seriously.

As for the tenants, Watson said, “Everyone’s cooperating. They’re all complying with the judge’s order.” 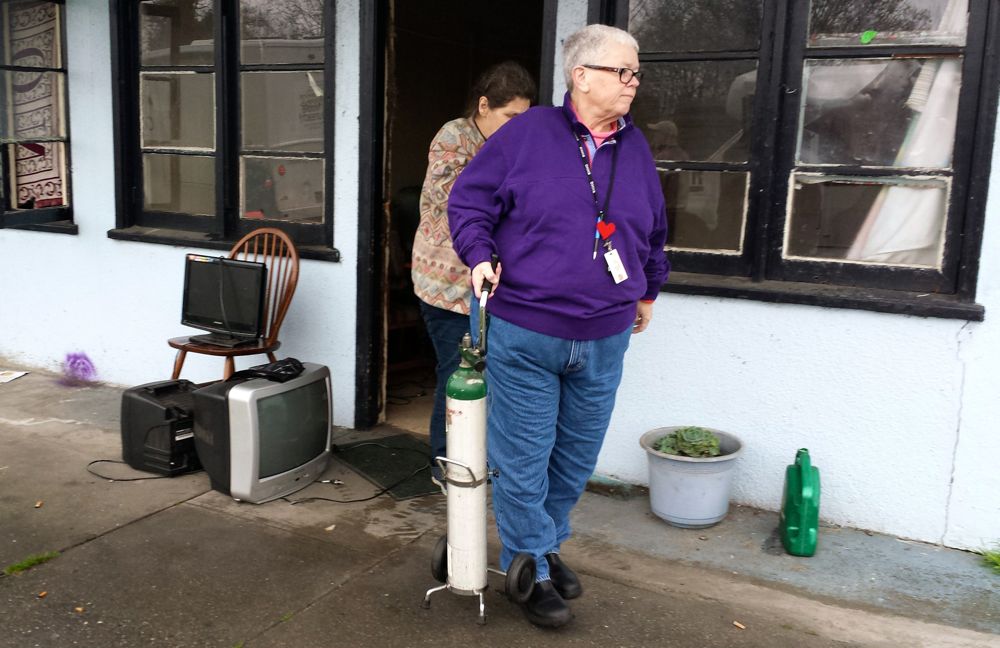 A woman helps one of the Blue Heron tenants by carrying her oxygen tank to a nearby car.

According to the City, property owners Floyd and Betty Squires have failed to get the required lodging permit for two consecutive years, the property has numerous building code violations and it has a higher rate of calls for emergency services than any other motel in the city. The most frequent violations, according to the City, are disturbing the peace, drug dealing and fights.

“The bottom line,” Watson said, “is that citizens were demanding we do something. But the situation can’t be changed until someone draws a line in the sand.” Watson said he has personally pointed out the need to make changes to Floyd Squires. “It’s subhuman living conditions,” Watson said of the rooms. “No one should have to live in these conditions. It breeds more crime, and it sets up a hopeless atmosphere.”

Watson said today one room had a puddle of urine on it, all the rooms are infested with cockroaches, and just two weeks ago the manager of the place was busted for dealing heroin. 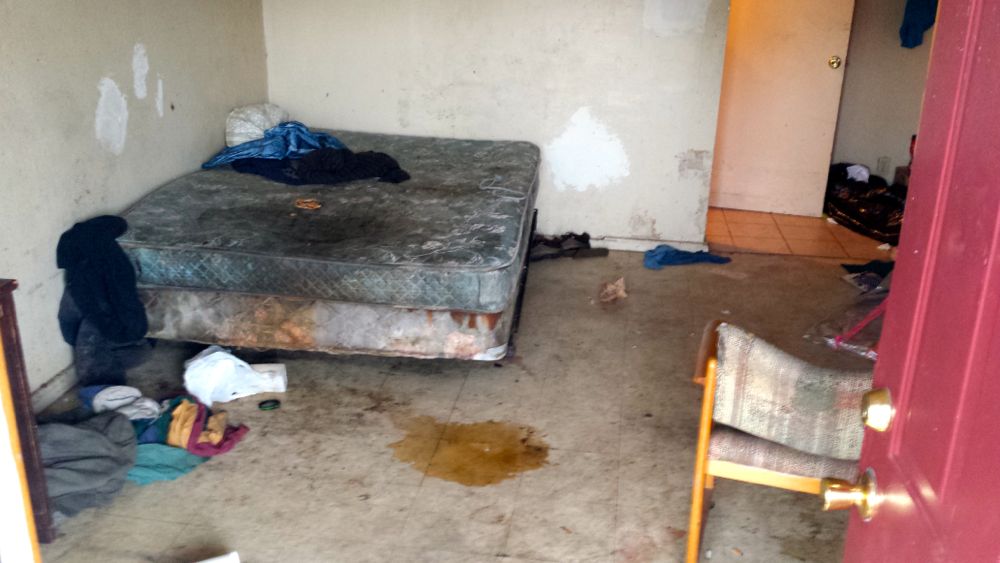 The interior of one of the vacated rooms at the Blue Heron.

He added that, far from being cold and heartless, city officials have been working with the county Department of Health and Human Services, the Eureka Rescue Mission and local philanthropist Betty Chinn to help residents line up new places to live. In some cases the City has provided hotel vouchers covering room rates for up to two weeks, Watson said, adding that they’re still working to find a place for Guy Anderson.

Catherine Nichols, who the Outpost interviewed last week, has been given an extra month to find a new place. She and her husband and adult daughter live in the detached two-story unit adjacent to the strip of motel rooms.

The city’s chief building official, Brian Gerving, was one of the primary authors of the lodging permit ordinance, which paved the legal road for today’s eviction. Outside the Blue Heron today he said he’s not sure why Squires failed to get the necessary permit.

“He believes the law doesn’t apply to him,” Gerving said. Yesterday the City received a claim for damages from Mr. Squires, presumably related to this code enforcement action, Gerving said. “But this was something the City was forced into because of the property owner’s inaction.”

Gerving said he realized that the eviction would have “an unfortunate effect” on some of the residents in the short term, but added, “we’re doing our level best to make sure people get a safe place to stay.” 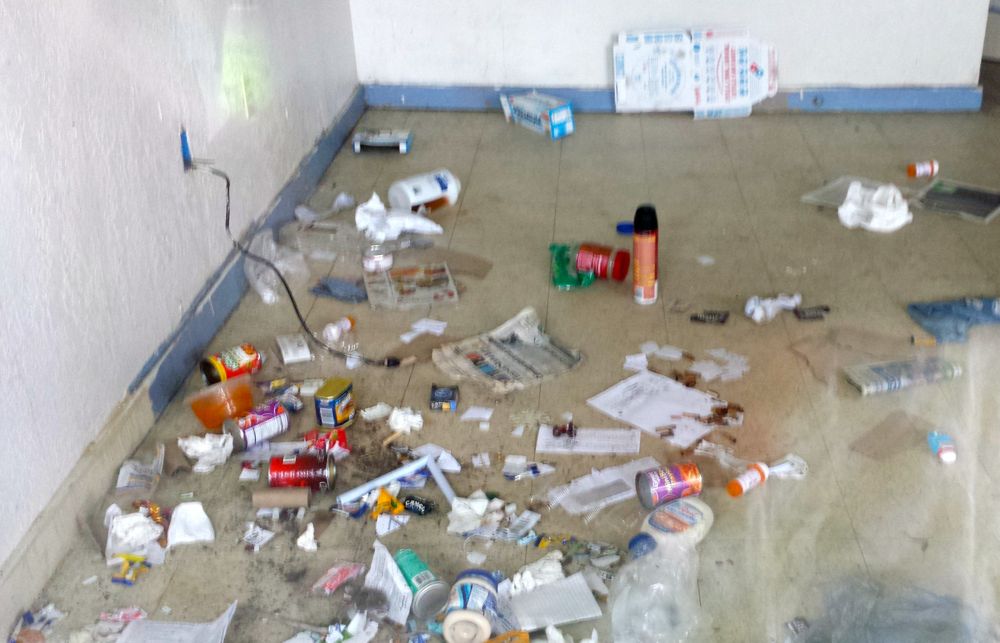 Another vacated room, strewn with trash.