“Even Though He Was Homeless, He Wouldn’t Accept The Reward” 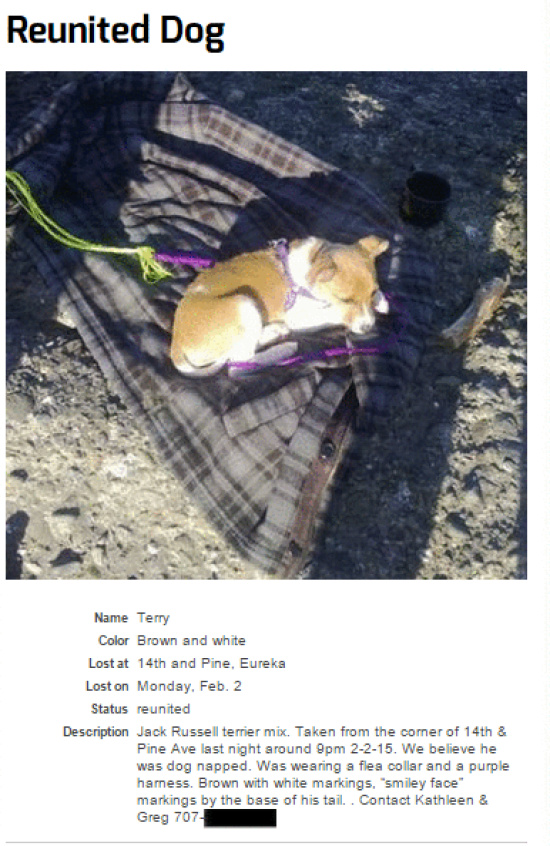 Kathy and Greg Parks say their puppy was stolen Monday night, but they told KHUM that the dog is home tonight thanks to an anonymous homeless man who refused to accept the reward.

We believe he was dog napped. Was wearing a flea collar and a purple harness. Brown with white markings, “smiley face” markings by the base of his tail.

Greg said he walked the streets of Eureka until midnight that night looking for the dog. Yesterday, he plastered Eureka with flyers.

This morning, more flyers in hand, Greg said that he went down to the homeless encampment behind the Bayshore Mall (often called “The Devil’s Playground“) to ask for help. He says also offered a $25 reward.

“There were a whole bunch of them that had bicycles. And they’d seen the flyers, they said they were going to go find the dog.”

According to Parks, a homeless man in his 20s with a thin mustache saw a puppy being dragged and kicked down the street by a stranger.

“He went over and asked her if that was her dog. She couldn’t give him a quick, good response so he said ‘That’s not your dog’, and he took it from her.”

“He was being a good Samaritan,” said Julia Toland, office clerk at nearby Mission Linen. “[The homeless man] told me that he was just trying to save a dog from getting hurt.”

Toland recognized Terry as the missing pup and called the number on the flyer. Greg said he walked over to Mission Linen to bring Terry home.

When Greg reached into his wallet for the $25 reward, the homeless man refused.

Choking up, Greg told KHUM “He told me that even though he was homeless, he wouldn’t accept the reward because what happened was not right.”

Kathy and Greg Parks get their dog back