« Getting Ripped Off Via Craigslist is a Lot of Work: a LoCO Cautionary Tale 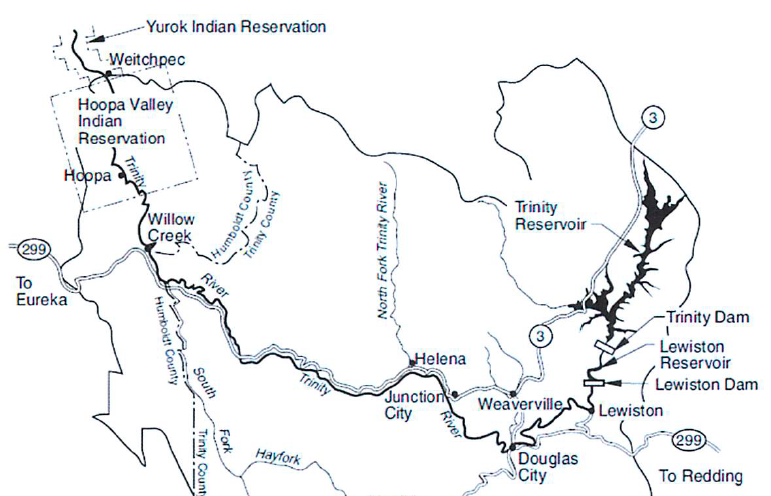 The U.S. Interior Department just made public a legal opinion on a 60-year-old water fight, affirming Humboldt County’s right under a 1955 agreement with state lawmakers for 50,000 acre-feet of Trinity River water each year. This is something that local officials and county tribal leaders have been advocating for a long, long time.

That volume of water was promised as a concession to Humboldt County leaders back in the 1950s “when Congress passed the legislation that built Lewiston Dam near Weaverville and began the diversion of our wild river to the Central Valley,” as the Outpost‘s own Hank Sims explained nearly four and a half years ago. The Interior Department’s opinion was expected imminently back in 2010, though it had been delayed before. And it was again.

The Hoopa Valley Tribe in particular has lobbied lawmakers to honor the agreement, which was written into the Trinity River Division Act and reaffirmed by contract in 1959. In exchange for this concession, Central Valley farmers got Trinity water included in the Central Valley Project. Yet despite repeated demands and a massive fish kill in the Klamath (of which the Trinity is the largest tributary) back in 2002, the state has never released those 50,000 acres.

Finally, in a memorandum issued Dec. 23 (click here for the pdf), U.S. Department of the Interior Solicitor Hilary C. Tompkins concluded that the 1955 agreement says exactly what it seems to say — that Humboldt County should get those 50,000 acre-feet each year.

That’s important, though the actual release of that water is dependent on the U.S. Bureau of Reclamation. And, lo, on New Year’s Eve, just eight days after the Interior Department issued its opinion, Reclamation followed with its long-awaited “Draft Long-Term Plan for Protecting Late-Summer Adult Salmon in the Lower Klamath River” (click here for the pdf), which includes the following statement:

Reclamation has determined that it shall administer as a distinct quantity its statutory obligation to release water to Humboldt County as provided for in Section 2 of the 1955 Act. Reclamation will be coordinating with Humboldt County officials concerning the release of this water, including the potential for its use for flow augmentation purposes.

Victory, in other words.

In an email to local tribes, Bureau of Reclamation Regional Director David Murillo asked them to submit comments on the draft plan by Jan. 31. A final version is expected in the spring, according to Murillo.

Congressman Jared Huffman (D-San Rafael)  today wholeheartedly welcomed the U.S. Interior Department’s disclosure of its internal legal opinion that outlines Humboldt County’s right to water from the Trinity River to protect salmon runs on the lower Klamath River during dry years. The Interior Solicitor’s opinion analyzes and clarifies the authority Humboldt County bargained for in the 1955 legislation that led to the damming and diversion of the Trinity River as part of the Central Valley Project.

“Humboldt County’s annual right to 50,000 acre feet of water from Trinity Lake is not a close call – it was explicitly guaranteed by statute and in a federal contract six decades ago, but these commitments have been ignored by the federal government,” Huffman said. “I’m gratified that the Solicitor thoroughly examined this issue and that the Interior Department heeded my requests to publicly release the solicitor’s findings.  The disclosure of the Solicitor’s legal opinion confirms the position I have argued for the past two years and is an important step toward honoring the promise Congress made 60 years ago.”

“Humboldt County welcomes the long-awaited determination that we, and other downstream users, will be receiving not less than 50,000 AF annually, in accordance with our 1959 contract with the Bureau of Reclamation,” said Humboldt County Supervisor Ryan Sundberg. “We look forward to taking the next step to determining uses for this water, and coordinating flow releases with resource agencies that will best benefit our North Coast communities.”

The solicitor’s opinion is the most thorough legal analysis done on the issue to date, and changes the Interior Department’s previous policy that the county’s contractual right to 50,000 acre feet of water was subsumed by existing releases meant to preserve fisheries in the Trinity River. The opinion makes clear that Humboldt County’s water is in addition to those flows and can be used to improve conditions for migrating salmon on the lower Klamath River. The U.S. Bureau of Reclamation in several years since the disastrous fish kill on the lower Klamath has used Trinity River water for that purpose, but it has declined to fully articulate the legal bases for such releases.  Central Valley water users have challenged those actions in federal court, and the court has repeatedly told Reclamation that it must specifically explain the legal bases for use of the water.

In a series of letters and meetings over the past two years, Huffman pushed the U.S. Interior Department to draft and issue the opinion acknowledging the 1955 Act and the 1959 contract giving Humboldt County the right to 50,000 acre feet of water.

“While this authority should have been acknowledged years ago, I am pleased that our arguments on behalf of Humboldt County, the county’s hard work on the issue, and the efforts by the Yurok, Hoopa and Karuk tribes have finally paid off,” Huffman continued. “This water is vital to the fisheries that my district’s tribes and commercial and sport fishermen depend on, and I am happy to see this important step toward fulfilling the pledge Congress made to Humboldt County six decades ago.”