Getting Ripped Off Via Craigslist is a Lot of Work: a LoCO Cautionary Tale 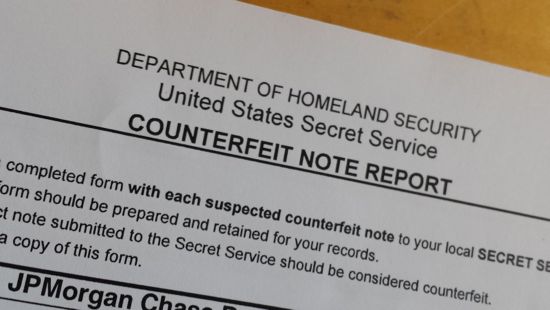 In retrospect, the transaction was kind of strange. But then again, aren’t they usually a bit odd when they originate from Craigslist? It certainly wasn’t strange enough to tip me off that $160 of the $169 I’d just pocketed were fake, nothing more than high-quality photocopies (high enough for my dumb ass, anyway).

I had posted an ad for our old 37-inch Toshiba Regza TV just hours earlier. The woman who responded said she’d head right over, but 45 minutes later she’d yet to arrive. I called her back on the cell number she’d given me and the man who answered said they were almost there, just trying to find the place.

A few minutes later the woman walked in our front door, trailing the sour chemical bouquet of cigarettes. The man who’d driven her waited behind the steering wheel of the white van parked at the curb. This was last Sunday, and the coaxial cable I’d screwed into the back of the set was transmitting a football game. I figured anyone buying a used TV would want to make sure it worked and had a decent picture. (Customer service!) But the woman gave the screen only a cursory look before asking, “How much did you want?”

“OK,” she replied without meeting my eyes. “I have one-fifty. I’ll run to the ATM and get another 20. That OK?”

When the white van pulled up again 10 minutes later, I gripped the TV awkwardly under my right arm, hauled it out the front door and eased it into the back of the van, screen-side up. (There you go, ma’am!) The woman hastily pulled out some bills and counted them from one hand to the other — a hundred, three 20s, a five and four ones for a total of $169. “I have a dollar in quarters if you want it,” she said.

Three days later my wife was feeding cash into the ATM outside our bank, and the machine (measurably smarter than I am) refused to swallow four of the bills — a hundred and three 20s. So my wife took them inside to the teller, who explained the bad news. The branch manager came over and showed her the clues I should have seen. For one thing, the serial number on all three 20s was identical. Also, the bills were a bit too small, the paper was wrong, and the high-tech security features now embedded in our currency — watermarks, glowing threads, color-shifting ink — were missing.

The bank manager then spent several minutes filling out paperwork to be submitted with our funny money to the U.S. Secret Service, a division of the Department of Homeland Security. And she suggested that we file a police report.

If only it were that easy.

This morning my wife and I walked into Eureka Police Department headquarters with a copy of our Counterfeit Note Report, hoping to order an extra-large serving of sweet, sweet justice. We had a description of the perpetrators and of the property they’d swindled us out of; plus I still had their cell number stored in my phone. Surely the detectives would have these lowlifes in cuffs before lunchtime, reasoned my irrational inner child.

Instead, the officer at the window offered a look of vague annoyance.

“Where are the bills?” he asked.

“The bank took them,” we explained.

“Hmm,” he replied while perusing our paperwork. “Usually they give them to us.”

Eventually the officer explained that, since the bank had sent the bills off to be verified as forgeries by the Secret Service, technically there was no crime yet. Or at least no evidence of one. “You should go back to the bank,” he said. “See if they’re willing to have one of our officers go pick [the fake bills] up.” Even if the bank doesn’t have them anymore, he said, “just come back and we’ll get a report started for you.”

Back at the bank, the manager told us that the bills had indeed already been mailed to the San Francisco office of the Secret Service. We explained, rather pitifully, that we had information about the perpetrators. My inner child was screaming inside my head now: “Someone catch the bad guys!”

The bank manager kindly Googled the Secret Service to get a contact phone number, which she wrote on a Post-it and stuck to our photocopied Counterfeit Note Report. On our way back out the door, three cheery bank employees wished us a good day.

When we walked through the swinging doors at Eureka Police headquarters, only a dispatcher sat behind the counter. He raised his hand to shield his eyes from the bright morning sun rays that accompanied us through the door. Recognizing us from 20 minutes earlier, the dispatcher, a young man in a zip-up track suit, got up from his chair and walked behind a partition to speak with someone. When he shuffled back around the wall, looking put out, he said, “I know Officer Bishop told you to come back? But they’re saying that now it’s between your bank and the Secret Service.”

So that was it. Try as we might, we couldn’t get anyone local to go look for these swindlers. I tried a few other tactics. I used a reverse phone directory online, hoping to get a name or address. No dice. I checked Craigslist again to see if they were trying to fence the TV. Nope. I called local pawn shops, whose employees were universally sympathetic. They took my information and said they’d call if a matching TV came in, but so far, no.

I even called the phone number of the thieves, hoping to dupe them into revealing their identities.

“No, you have the wrong number,” he said gruffly.

“Oh, sorry,” I responded, desperately trying to come up with another brilliant question. “Um, say, whose phone is this?” I asked lamely.

So now my wife and I can only wait for a suit in Frisco to receive our report in the mail. Maybe we’ll get a call; maybe we won’t. We certainly don’t expect to get reimbursed that $160. (Hey, at least the other nine bucks were real!) And our hopes for sweet, sweet justice have dwindled to almost zilch. So, lacking any other outlet, I’ve written this as a cautionary tale for my fellow Craigslisters: Take a moment in your cash transactions to casually check for glowing threads, ghostly watermarks and color-shifting ink. Those things are your friends.