What’s Up With Those Paint Splatters on the Freeway? 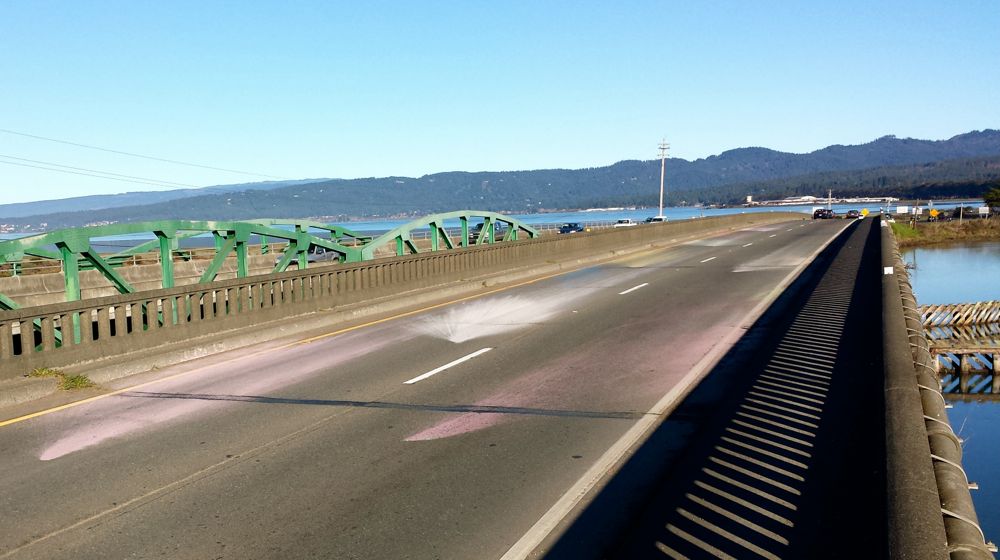 Both north- and southbound Eureka Slough bridges have been sprayed with pigment.

You’ve seen these things, right? In recent years some unsung freeway Pollock (or incorrigible vandal, if you prefer) has been adorning local roadways with multi-colored paint comets. Your LoCO correspondents have noticed them up and down Highway 101, usually on bridges, from Salmon Creek north to the airport, and many spots in between.

Several people have asked us what we know about this phenomenon. Can we unmask this impressionist Banksy? Are those oils or acrylics? What is the artist attempting to communicate?

We reached out to the bosses of the roads and received the following statement:

“Caltrans’ Bracut maintenance crew has observed new paint splashes at the Eureka Slough bridges every few weeks, leading us to believe that maybe the roadway is some artist’s new canvas.”

As for technique, Caltrans Spokesman Eli Rohl said the commonly accepted theory in local officialdom is “someone with paint balloons.”

That jibes with the observations of Chris Durant, one of several people to inquire about the rainbow plumes. Durant is the co-editor/co-founder of humor magazine Savage Henry and also an amateur spatter analyst, a la Dexter.

“I studied the splatter,” he said when we relayed the Caltrans theory. “Balloons make sense.”

As for the rest of the mystery, we turn to you, LoCO readers. Anyone know who’s responsible? And, follow-up question, what do you think — ugly distraction or happy improvement?