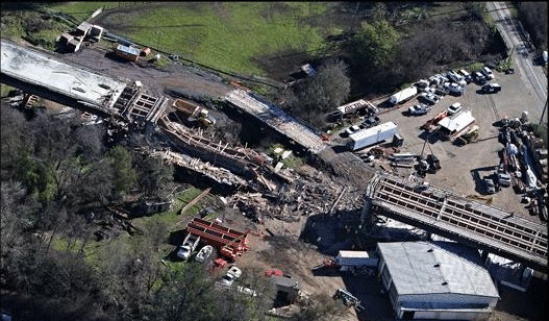 A state investigation has determined the falsework that collapsed on the Willits bypass on January 22 “was not properly designed, was not erected as per the design plans, was missing components, [and] deficiencies were not identified when inspected and signed off by the project engineer for the company erecting it.”

The California Occupational Safety and Health Administration cited all three employers at the worksite – Caltrans, Flatiron West, Inc., and “DeSilva Gates-Flatiron West: A Joint Venture” – for four “serious” violations. Those July 16, 2015, citations were for: failure to properly inspect the falsework; failure to make a thorough survey of the conditions of the site to determine “predictable hazards” to employees; failure to ensure vertical supports were erected on a “properly compacted and reasonably level” base; and failure to ensure the falsework was designed and erected to “assure its ability to withstand all intended loads.”

In addition to the “findings” quoted above, Cal/OSHA’s “Conclusion” says: “Multiple problems with missing and improperly installed components and the loss of support at a double-sill arrangement that did not have a double-cap restraint system installed was the root cause of the collapse. Unstable ground is still being investigated. The potential initiators of the double-sill failure were identified as improper cable tensions due to settlements and excessive joint take-up and an eccentric load induced into the falsework.”

Phil Frisbie, spokesman for Caltrans District 1, forwarded this formal statement from Caltrans Wednesday afternoon: “Safety remains Caltrans’ top priority and we will continue to work with Cal/OSHA and our contractors to ensure the safest workplace possible while we move forward on this critical project. The Willits bypass will ease congestion and improve air quality in the region for years to come.”

Willits Weekly asked Cal/OSHA spokesman Peter Melton about the phrase: “Unstable ground is still being investigated.” Was it Cal/OSHA who was still investigating this issue? Melton said it was not: “Our investigation is finished,” he said. Melton did not know which agency or company was being referred to as “still” investigating.

Frisbie was not able to answer questions about the “Unstable ground is still being investigated” sentence, but when asked if the current work on drainage improvements that has closed Valley Street was abatement for the citation about failure to thoroughly survey or failure to ensure the base was “properly compacted,” he said the drainage work was “part of the bypass project.”

“Since the fill of the bypass south of the viaduct might alter drainage patterns, we are adding culverts next to the existing bridge to improve high water flows,” Frisbie said.

He also said “any future ground settlement” of the flood plain area where the bypass viaduct crosses Haehl Creek “will have no effect on the viaduct because of the deep steel piles which support the columns.”

The three workers “seriously injured” in the January 22 bypass falsework collapse were: Phillip Lappe, 31, who was treated at Santa Rosa Memorial Hospital for a crushed pelvis, and Fermin Jaramillo, 52, and Jullian Lamas, 57, who were both treated at Howard Hospital in Willits for multiple fractures. “All will be off work for several months,” the undated investigation summary states. Several other workers were treated and released.

“The project had more than 150 feet of falsework collapse during a concrete pour,” the investigation summary states. “The falsework failed at less than 50 percent of its design capacity and fell more than 25 feet with multiple [employees] working on the top of the structure and one [employee] … an environmental engineer working under the structure.

Coding on the investigation summary document indicates that “insufficient or lack of engineering controls” was a “human factor” contributing to the accident.

The accident occurred on January 22 of this year at 2:18 pm, the narrative’s “Introduction” says, “and was reported to the Sacramento District Office on the same day by the Mendocino County Sheriff’s Office and the employer.”

The only other section of the narrative is an “Accident Description” paragraph: “On arrival to site the following morning there was just a huge pile of steel, lumber and concrete all collapsed on the ground. With Cal/OSHA oversight, Caltrans assembled a team of bridge structure engineers to separate materials and perform a failure analysis.”

Frisbie said Wednesday the “failure analysis” report was still not ready to be released to the public, but said it would be released “as soon as it is done.”

Frisbie also said the costs of rebuilding the falsework “has been directly paid by the contractor’s insurance. There have been minimal costs to the state due to inspections that were performed twice.”

Flatiron West, Inc. has additionally been cited by Cal/OSHA for a “general” failure to “establish, implement and maintain an effective injury and illness prevention program.”

This story appears in this morning’s Willits Weekly, which is a great hometown paper. Fan up.