SoCal Senators Get to Know the North Coast 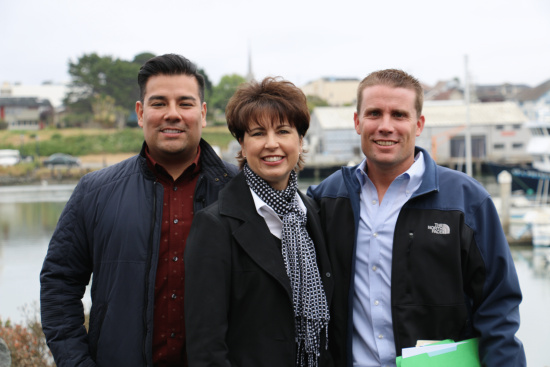 While some of Humboldt’s workforce enjoyed today as an Independence Day “Observed” holiday, local political reps and other notables spent the day explaining the uniqueness of the North Coast to a trio of state senators.

Our own representative, Senator Mike McGuire, is hosting Senator Connie Leyva (D-Chino) and Senator Ricardo Lara (D-Bell Gardens) through a series of meetings with timber industry representatives, local law enforcement, marijuana growers, and local elected and tribal leaders, plus a tour of the Port of Humboldt Bay.

The journey northward was prompted largely by interest in Humboldt’s port – McGuire, Lara and Leyva are all members of the Select Committee on Ports & Goods Movement, which focuses on economic development initiatives, oversight on the state’s ports and goods movement, and research.

After a rainy tour of the bay aboard the Madaket – whose tiny bar provided shelter from the occasional rainy outburst – the senators gathered in the Woodley Island conference room for a press conference with members of the Humboldt Bay Harbor, Recreation and Conservation District Commission and staff. McGuire opened by emphasizing the uniqueness of the district and admiration for the bay, “this amazing resource that we have in our backyard.”

He also referenced his pending bill to regulate medical marijuana, repeating several themes from his Sacramento hearing earlier this week, but quickly moved on to introducing Lara, who gave an overview of the role California’s ports play in the state – and global – economy. Forty-four percent of goods entering the U.S. do through through the Los Angeles and Long Beach ports, “touching every congressional district in the country,” he said.

While the “megaports” are seeing container numbers rise, smaller “niche ports” like Humboldt’s “continue to struggle in these difficult times.” The answer, Lara said, is diversification. Smaller ports have an advantage in this because they can implement new projects much faster, take advantage of their unique natural environment “and excel in that,” he said. The key is to maintain those attributes which make a port distinctive, while still pursuing diversification into the global economy.

Leyva, whose Southern California district encompasses California’s largest land port, joked about the rain – “we don’t know about that” – but followed up with a serious acknowledgment about how living wage employment impacts communities. “Good jobs fix a lot of what ails us in this society,” she said.

The tour impressed her, especially the marina, which she called “gorgeous,” and learning about Humboldt’s importance to West Coast aquaculture. “There’s so much opportunity here,” she finished. 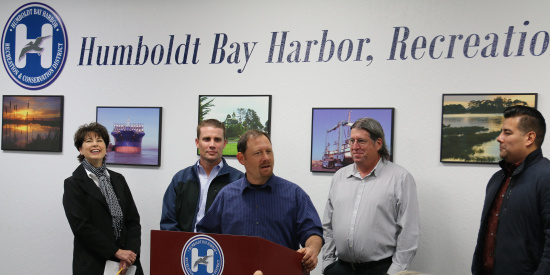 Harbor Commissioners Richard Marks and Mike Wilson followed up with an overview of how the harbor district has expanded its interests over the past several years. Wilson, currently the longest-sitting member of the commission, expounded on the promise of the biomass, renewable energy and aquaculture industries on the bay, and pointed out the unusual combination of responsibilities Humboldt’s district manages. “We’re so different than others… We have to take into account traditional shipping, but also our culture and natural resources.”

There’s been growing recognition that diversity of economic opportunities is key, he continued. “It feels more like we’re in a growth phase,” Wilson said. “When I first started, we were on the tail end of a collapse.” Now we’re seeing aquaculture thrive, an increase in biomass exports and recreational uses on the rise, he said. “There’s a real positive outlook.”