« Blue-Green Algae Comes Early This Year; Local Health Pros Give Tips on How Avoid the Stuff 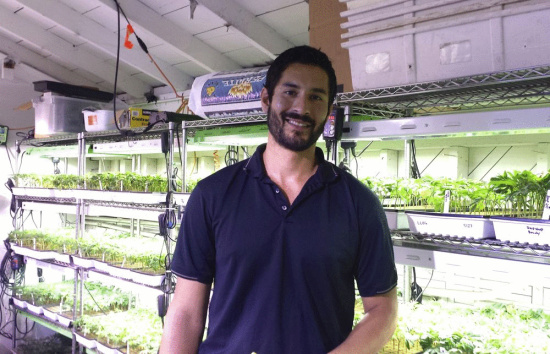 Working at a medical marijuana dispensary in 2015, you never know what type of questions you’ll get. Bryan Willkomm, general manager at Humboldt Patient Resource Center in Arcata, said a lot of folks, especially the seasoned old-timers, will just take a sniff of the various buds on offer and say, “Smells good to me.” That whiff gives them all the information they need. Others are more demanding.

“Our more modern, younger patients may be asking for the residual solvent test results and the terpene profile analysis,” Willkomm said. “They’ll ask, ‘Is it high in myrcene and limonene?’” Others, looking for cannabis-infused edibles, may ask about allergens, dosage levels, dietary restrictions and, if they’re diabetic, sugar content. Still others request topicals, which are available in varying ratios of cannabidiol (CBD)-to-delta-9-tetrahydrocannabinol (THC).

There’s a lot to know — more every week, it seems. 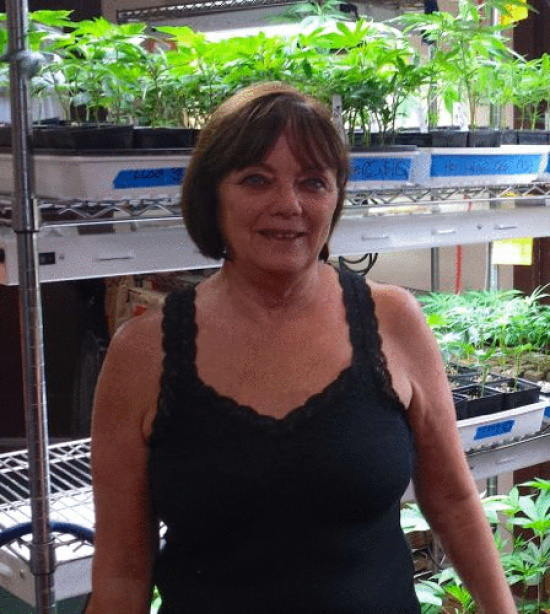 “When I first got here about eight years ago,” said Mariellen Jurkovich, director of Humboldt Patient Resource Center, “we only had cannabis that we grew — certain strains, whatever was easy.” Gradually the dispensary started carrying new products — “not because I wanted to bring them in. We brought them in because people were starting to ask for them — edibles, tinctures, salves, a host of things.”

Willkomm said that when he started at the dispensary, just two years ago, they carried 15 different products, including flower buds, two types of topicals and four or five edibles. “We have over 300 products now,” he said.

With the medical marijuana industry maturing and the recreational industry just taking off, there has been a virtual explosion in so-called “cannabis delivery methods,” from good old fashioned buds (which can be smoked, vaporized or ingested) to oils, tinctures, topical creams, oral sprays, hash, shatter … the list goes on like a stoner’s daydream.

Meanwhile, the customer/patient base is growing more diverse, too, along with the list of ailments they’re hoping to alleviate. Clients include veterans suffering from PTSD, cancer patients fighting the side effects of chemo, parents seeking a cure for their children’s seizures and, sure, some people who probably just want to get high for the fun of it.

All of these changes have made the dispensary worker’s job a lot more challenging. Until recently, these “budtenders” mostly served up whatever strains were on tap each day, though they did have to know quite a bit about those strains. Now, however, dispensary workers are being asked to fill the roles of pharmacists, researchers, social workers and amateur physicians.

Jurkovich operated a wellness center in Arcata for about a year, with the explicit goal of offering such a holistic experience for patients. But the process of pursuing two conditional use permits simultaneously — one for the dispensary and another for the wellness center — proved too expensive. While the wellness center has ceased operating, Jurkovich trains her employees to take a comprehensive approach to treating patients. 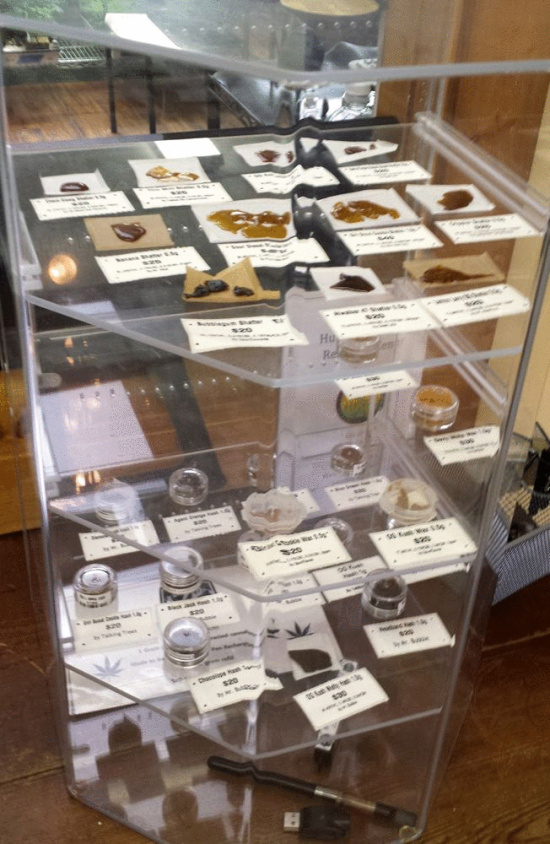 Last year she sent her staff — which has ballooned from 10 to 20 — to Colorado, where they visited big grows and collectives to learn how things were being done in another market, one where recreational marijuana has been legalized. She also pays her staff to attend educational workshops and conferences.

Marijuana’s Schedule I status under the federal Controlled Substances Act makes it virtually impossible for U.S. researchers to study the plant’s therapeutic properties. Research-grade cannabis in this country is controlled by National Institute on Drug Abuse, whose congressionally mandated mission is to study only the harmful effects of controlled substances. So, while 23 states and the District of Columbia have legalized medical marijuana, and while the President himself has voiced support for it, domestic scientists aren’t allowed to study the beneficial uses of cannabis.

“Talk about frustrating,” Willkomm said. “Here in California, where we have Proposition 215, we’re flying up to Oregon to meet with Israeli doctors who are allowed to do research. All we can do is bring that information back, provide it to patients and refer them to that research.”

The Humboldt Patient Resource Center sometimes feels like an academic setting, he added. Indeed, the dispensary is an approved learning center through Humboldt State University, meaning student interns come in and study the ins and outs of the operation. Customer come in to talk and ask about the latest research, and employees are told to study up on cannabis whenever there’s downtime. 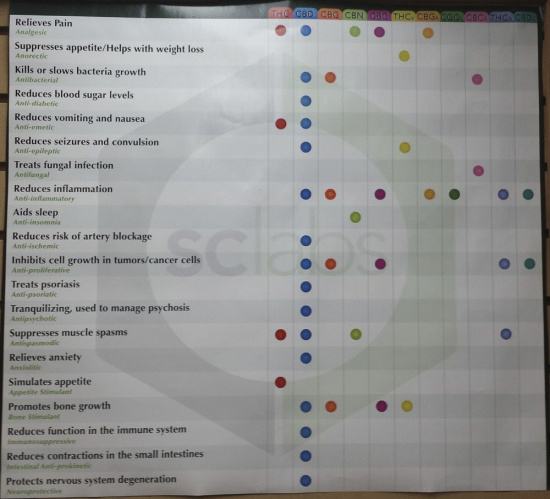 A chart on the wall of HPRC lists the ostensible health benefits of various cannabinoids.

“It’s a really big subject,” Jurkovich said. “It’s not basic anymore. … We’re constantly on the computer, doing research, buying books. It’s really kind of exciting.” It can also be sobering. The dispensary has seen an increase in patients undergoing palliative care — people seeking relief from serious, often terminal illnesses. “There’s a lot of death, a lot of illness,” Jurkovich said. “It’s disturbing how much illness is out there in our community.”

Humboldt County is consistently ranked near the bottom of the California Department of Public Health’s “County Health Status Profiles,” which ranks counties on a wide range of health status indicators. We have particularly high rates of cancer, liver disease, stroke, deaths from unintentional injuries and drug overdoses.

And as marijuana becomes more culturally normalized, more and more people are trying it. Recent years have also seen another dramatic change in medical marijuana itself thanks to the increasing knowledge about — and popularity of — cannabidiol, or CBD, one of at least 85 cannabinoids found in the plant. Unlike the better-known THC, CBD is non-psychoactive and has shown to have therapeutic properties for a wide range of ailments, including seizures, psychosis, inflammation, and anxiety/depression disorders.

Medical marijuana cultivators have bred strains high in CBD and low in THC, making for a plant without the characteristic high and thus less social stigma.

“CBD is an interesting cannabinoid for us,” Willkomm said, “because it has opened the door, in a sense, to patients having enough confidence to come into dispensaries knowing they’re not going to get a psychoactive high.” In a way, the popularity of CBD strains gives the lie to lingering accusations that medical marijuana is merely a smokescreen for people who want to get baked legally. Patients who might otherwise avoid marijuana due to its psychoactive effects are being drawn into dispensaries for the first time.

“We’re now getting flooded with Baby Boomers,” Jurkovich said, “and people who know more about cannabis, asking, ‘What will help me with this disease, that disease?’” The dispensary runs a compassion program, offering free and reduced-price products to patients who are terminally or seriously ill. 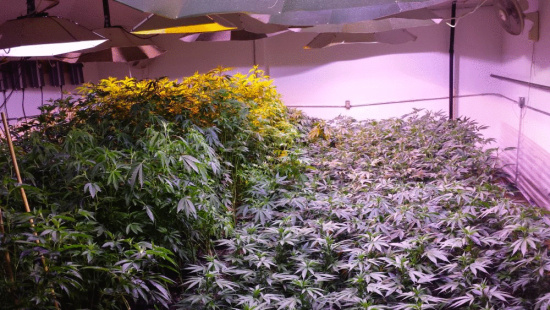 The clone room at HPRC has plants of varying ages.

High-CBD strains aren’t always the appropriate medicine, though. “With certain patients’ ailments, and information we get from doctors, THC is the benefiting cannabinoid,” Willkomm explained. “Small example: antiemetic, you’re throwing up. The FDA’s only approved use of THC is for an antiemetic [the anti-nausea medicine Marinol]. So if you’re not willing to try [high-THC marijuana] because of that euphoric sense, then you may not accomplish your goal in relieving that ailment.” (It should be noted that “euphoria” is not a universal reaction to consuming weed.)

With the increasing differentiation between strains, organization has become a vital component to running a successful dispensary. The Humboldt Patient Resource Center was recently tested on just that.

The dispensary was finally granted a conditional use permit from the City of Arcata in September. It also operates a marijuana garden that’s been Clean Green Certified by a third-party inspector.

Since marijuana isn’t recognized by the federal government as an agricultural crop, organic certification isn’t possible. Instead, cultivators looking to prove their enviro-friendly bonafides have turned to such third-party companies as Crescent City-based Clean Green Certification, whose employees inspect gardens to ensure they’re being run sustainably and responsibly.

The Humboldt Patient Resource Center was just recertified last week, and as part of the process an inspector came in, pulled random products off the shelves and asked employees to trace them to their origin, working backwards from the retail shelf to the processing/packaging phase, the inventory/purchasing phase and ultimately the garden where the plants were grown. 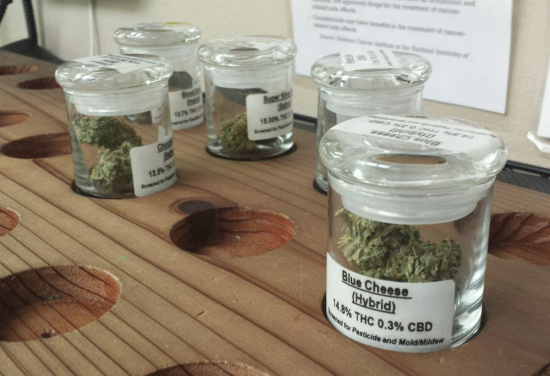 Bud strains are labeled with THC and CBD percentages.

“We did that for two products, and soil sampling as well,” Willkomm said. This process, he said, adds legitimacy in the eyes of both the public and local government. “Now we’ve invited somebody in who has no financial interest in our company being successful but rather does his job and produces the results, as a third party, to the City. What that does is just shows we’re transparent.”

That extends to the growing process as well. All cannabis sold at the dispensary is first sent away for testing at one of two labs — Pure Analytics in Santa Rosa or SC Labs in Santa Cruz. The labs test for potency as well as contaminants such as pesticides, microbes and solvents.

It takes a full week to get results back from the lab, which is one of several reasons why Jurkovich and Willkomm are excited about the “Medical Marijuana Innovation Area” proposed for the old Humboldt Flakeboard building on West End Road. City staff asked their opinion about what types of businesses might go in there, and a testing lab was high on their list, they said. They would also like to move the dispensary’s garden from its current location, a room adjacent to the retail area on Sixth Street, to warehouse space in the Innovation Area.

As Arcata demonstrated by opening this door for the industry, nearly everyone seems to be preparing for full recreational legalization in the near future — next year, more than likely. Asked what they’re doing to prepare, Jurkovich and Willkomm said they’re just continuing to focus on refining what they’re already doing. As Colorado and Washington have shown, the medical marijuana industry doesn’t disappear when weed-for-fun is legalized.

“We, I want to stay medical,” Jurkovich said. “We have no trouble with recreational. … But cannabis for me is a medicine, and I would like to see it continue as a medicine.”