Clam Beach is ‘F’ed: Popular Humboldt Seaside Destination is Third-Dirtiest in the State »

Oh! What’s this on our Facebook wall? Someone has posted a YouTube video titled “UFO over Arcata” and asked LoCO to weigh in on what it might be by asking us, “Thoughts?” Sure! We have those sometimes!

So we watched it. On a serene evening, presumably nine months ago, amateur videographer Len Perry channeled his inner Double Rainbow Guy and reacted to a small, unexplained light in the skies over Humboldt.

“It’s just chillin’,” the voice in the clip exclaims. And then, poof, the chillin’ thing was gone. What was that? If only he’d had his telescope, Tori.

Well, the video extracted joy and chuckles in our office, but we’ll admit we too have no idea what the hell that UFO was. So, we bring it before the scientifically savvy LoCO commentariat. Len has already ruled out contrails as the culprit (maybe he’s right in doing so). So what was in the sky over Arcata nine months ago!? Tell us! 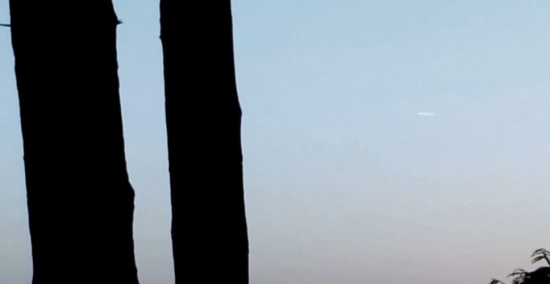