Clam Beach is ‘F’ed: Popular Humboldt Seaside Destination is Third-Dirtiest in the State

“How can Clam Beach be the third worst beach in the state, in a list dominated by major population centers?” That’s the question Humboldt Baykeeper Director Jen Kalt posed on her Facebook page – and one many Humboldt residents are asking with the release of Heal the Bay’s 2015 Beach Report Card. Once again, the popular kiteboarding spot made the organization’s “Beach Bummer” list, a ranking of the 10 most polluted beaches in the state, with its letter grade slipping from a D to an F.

Here’s how the grading works:

Heal the Bay analysts assigned A-to-F letter grades to 468 beaches along the California coast for three reporting periods in 2014-2015, based on levels of weekly bacterial pollution. Some 95% of beaches received A or B grades during the summer (April-October 2014). That figure is essentially steady with the last year’s report.

Four other Humboldt beaches were monitored: Trinidad State Beach near Mill Creek, Luffenholtz Beach near Luffenholtz Creek, Moonstone County Park at Little River State Beach and the north side of the Mad River Mouth. All received A grades.

So why is Clam Beach failing when its coastal siblings are doing so well? Hard to say, Kalt says, as landowners around Strawberry Creek continue to deny county representatives access to test the creek for bacteria sources, which could include onsite sewage treatment systems, wildlife, domestic animals and vegetation.

Kalt said county representatives tried to find the source of bacteria up Strawberry Creek, but landowners denied access to their property for testing. The pollution stemming from Strawberry Creek is one of the reasons that research to identify bacteria sources has become Baykeeper’s “top priority,” she said. Later this year, she added, the nonprofit watchdog group will begin sampling at Little River and Janes Creek.

Clam Beach County Park, near Strawberry Creek With over 80% (26) of the 32 dry weather samples collected during the summer dry period exceeding at least one state bacterial standard, Clam Beach County Park made the Beach Bummer List for the second year in a row, moving up three places from last year to the No. 3 spot. Potential bacterial sources include onsite sewage treatment systems, wildlife and domestic animals, and Strawberry Creek. 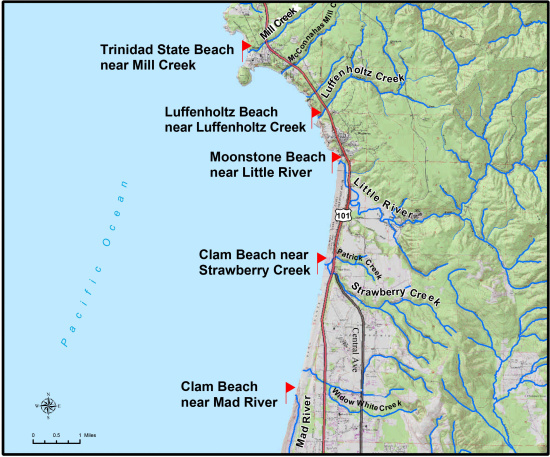 A temporary advisory is in place to stay out of Strawberry creek and the water near the mouth of the creek.

After a significant rainfall, stormwater runoff draining into creeks, and the ocean can contain high levels of bacteria and pollutants, which is why the county’s Environmental Health Departments advises beach users to avoid contact with ocean and creek water until at least three days after a heavy rainfall – which hasn’t been as much of a concern throughout the state.

In fact, Heal the Bay notes:

The severe drought now impacting California appears to be a major contributing factor to generally strong water quality at beaches statewide. With record low rainfall reducing the amount of polluted runoff funneled into our seas, beach grades across the state are consistently outperforming their five-year average.