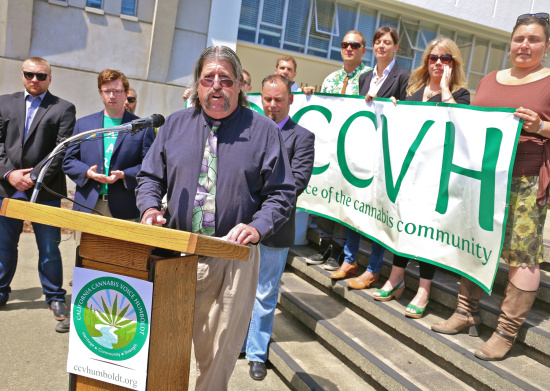 This afternoon, with an impassioned presentation outside the Humboldt County Courthouse, leaders of the political action group California Cannabis Voice-Humboldt (CCVH) unveiled a proposed land use ordinance aimed at regulating marijuana cultivation throughout the county’s unincorporated areas.

With supporters gathered around a portable lectern and a team of organizers behind him, CCVH Executive Director Richard Marks put the event into a historical context.

The organization, which is a spinoff, of sorts, from the statewide group California Cannabis Voice, has been working for more than a year to develop this ordinance, which it plans to open up for 45 days of public input before presenting it to the Humboldt County Board of Supervisors as a ballot initiative. Group leaders say they’re hoping the board will adopt the initiative directly, rather than sending it to the ballot for next June’s primary election.

Luke Bruner, the agency’s co-founder and a member of its board of directors, said the ordinance was created through collaboration with local cannabis farmers, environmental consultants, elected officials and regulators from the county and state. And when he stepped to the lectern this afternoon, Bruner unleashed the kind of fiery rhetoric typically reserved for Hollywood hunks on horseback immediately before an epic battle sequence. 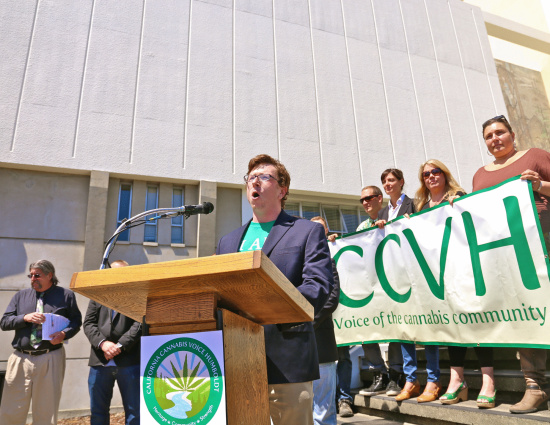 “People of Humboldt,” he proclaimed, “today is a great victory for this community, and today represents the future life of our people and our land.”

The sound system set up ahead of time had failed, but as the gathered supporters noted, Bruner didn’t need the mike. With his chin held high, he projected over the roar of passing semis. “Around the world,” he said, “countries go into bankruptcy. Puerto Rico slides into insolvency. Cities and counties around California teeter on the brink. But the future of Humboldt is bright because the farmers and the people are organized.”

Sitting on a table nearby, and posted to the group’s snazzy new website, was a “short form” of the ordinance itself, showing all the proposed changes to county code. This ordinance aims to regulate every stage of the weed market within unincorporated Humboldt County, from planting, cultivating and harvesting to processing, packaging, transportation, distribution and sales.

The lynchpin of the draft ordinance lies in this assertion: “Cannabis may be cultivated in any zone in which general agricultural use is permitted, including, but not limited to, the Timber Production Zone (TPZ).” If this ordinance passes, then, Humboldt County residents could grow marijuana pretty much anywhere they’re now allowed to grow trees, flowers or vineyard, anywhere they can raise dairy cows, honey bees or chickens.

The ordinance would add cannabis cultivation to the county code’s definition of General Agriculture. And since general agriculture is principally permitted on lands zoned for timber production (TPZ), cannabis farms would also be allowed on such lands without having to obtain a separate permit — as long as the grow doesn’t have a canopy larger than 6,000 square feet.

Here are some of the details:

Anyone in the county with a parcel of five acres or more (and who’s not a resident of an incorporated city) could grow a crop for personal use, up to 600 square feet in canopy size, without having to get zoning approval. 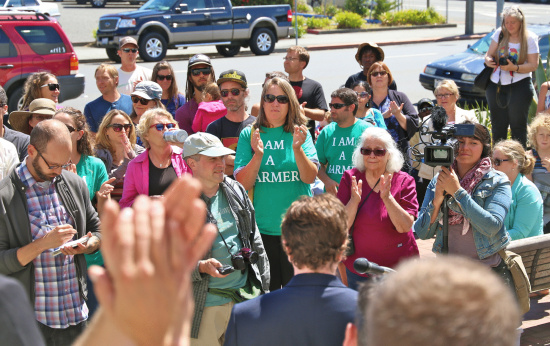 The crowd looks on as Bruner speaks.

For crops larger than 600 square feet but smaller than 6,000 square feet, property owners would be granted a ministerial (aka “over the counter”) permit, as long as they also pursue the appropriate permits with state regulatory agencies.

To start a grow of more than 6,000 square feet but less than 10,000 square feet in canopy size, growers would need to get a conditional use permit. Curiously, landowners with established grows this size would not have to get this permit when the ordinance took effect — again, so long as the property owners were pursuing the proper state permits.

There is no upper limit on grow size in the ordinance, though grows larger than 10,000 square feet of canopy (which is roughly the size of a Major League Baseball infield) would require a conditional use permit from the county.

All commercial growers would also need a business license from the county treasurer/tax collector. That license would have to be renewed annually, at a cost of $25, with revenue going to the county general fund. Any grower who violates the rules in the ordinance could have his/her license suspended.

Copies of each license application would be sent to the local fire department, the county ag commissioner, planning director and “any other governmental agency having a responsibility of enforcing land use, fire, health or safety laws involving the operation … .” And this is how CCVH proposes to deal with questions of environmental enforcement. By classifying cannabis as General Agriculture, the county could assign enforcement to agencies that already handle those duties with other crops — agencies such as the California Department of Fish and Wildlife, Cal Fire and the state Water Resources Control Board.

The program — official name: “Humboldt County Cannabis Cultivation Compliance Program” — would be administered by the County Agricultural Commissioner, and it would allow on-site inspections, laboratory testing of crop harvests and registration of participating cultivators and gardens.

Bruner today reiterated what group leaders have said before — that they hope the ordinance will serve as a template for the rest of rural California. 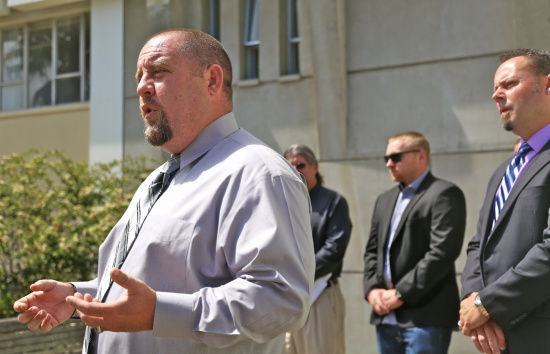 Patrick Murphy, chair of CCVH’s policy committee, also took a turn at the lectern, telling the crowd that Humboldt County is the heart and soul of the cannabis industry, and it should set a model of “middle-class farms” rather than the industrial factories of Colorado and Washington. He called for the creation of “salmon-safe” cannabis and said, “Our brand is the environment.”

But local environmental leaders remain skeptical about the ordinance and the process through which it has developed. One of the most vocal critics of that process, Northcoast Environmental Center Executive Director Dan Ehresman, obtained a copy of the draft ordinance before today’s official release and said it has the same failings as earlier drafts.

“It’s still giving a green light for large-scale growers who are doing significant environmental damage to watersheds and communities,” Ehresman said. He argued that while there are plenty of small-scale growers operating responsibly, this ordinance would instead give a free pass to those who’ve been violating the law and harming the environment for years. “CCVH is about protecting big growers. That’s what this land use ordinance is about.”

Ehresman also called into question the transparency of CCVH and its drafting process. The group has worked with former Humboldt County Supervisor Bonnie Neely and the high-powered attorney firm Nossaman LLP to craft the language of the ordinance, and while group leaders have touted the importance of public involvement, they have declined to reveal who sits on their board of directors, despite several requests from the Outpost.

In an interview earlier today, CCVH President Andre Carey said that the major phase of public participation begins now, with the release of the land use ordinance. “People can introduce [suggested] changes that will be taken back to the Nosseman Group attorneys,” Carey said. He added that the group has drawn crowds of more than 200 people to various watershed events across the county. 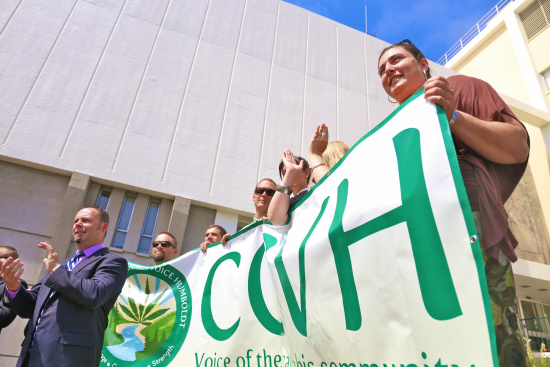 Addressing concerns over the size of grows allowed, Carey said water availability will serve as a limiting factor. “If you can’t show proof that you can get adequate water then you won’t get permit,” he said. And he argued that a 6,000-square-foot grow is small compared to other agricultural products.

Carey confirmed that  CCVH is hoping to gather enough signatures to force county supervisors into action. As the Outpost previously reported, the group plans to take advantage of a recent California Supreme Court ruling that cleared the way for project applicants to sidestep the California Environmental Quality Act (CEQA) by advancing legislation through the state’s voter initiative process.

Here’s the deal: If CCVH can gather signatures from 15 percent of the county’s 76,000-or-so registered voters, the group could then ask the Board of Supervisors to hold an immediate special election. That would leave the board with just three options:

1) It could adopt the ordinance as written;

2) It could immediately order a special election (an expensive option); 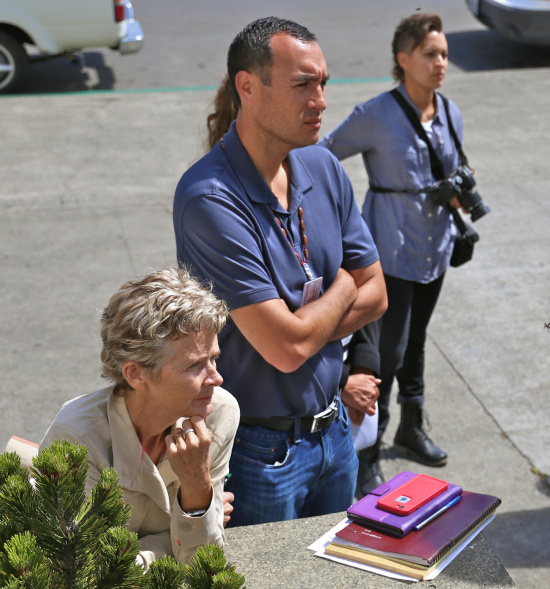 Humboldt County Supervisors Estelle Fennell and Ryan Sundberg, who serve as the board’s medical marijuana subcommittee, have been conferring with the group throughout this process. In a phone interview this afternoon, Fennell said she has argued for collaboration.

“What I’ve made very clear is that I would want to reserve the right of the Board of Supervisors to amend [the ordinance] in any way we saw fit,” she said. “I think they’re aware of that.”

Fennell explained that she’d like to have the ordinance go through a variety of local officials before adoption — officials such as county staff department heads, county counsel, the sheriff and the agriculture commissioner.

The law, however, says the Board won’t necessarily be given that opportunity. Fennell noted that proponents of last year’s GMO-banning Measure P used this same process, sending the measure directly to voters (where it passed) and thus denying the Board any chance to modify it.

But Fennell said she’s hopeful that CCVH is genuinely open to input. She and Sundberg, she said, are simultaneously working on their own ordinance to regulate medical marijuana cultivation, and she said, “I don’t see any problem folding the two together.”

Fennell noted that she hasn’t had a chance to read the latest draft in detail, but asked for her first impressions she said she’d like to see some limit on the allowed size of grow operations.

“There doesn’t seem to be a limit in there,” she said. “As the people at the press conference today said, they’re focusing on small farms. If that’s the case, we need to define what a small farm is.”

But on one point she was in complete agreement with the group’s enthusiastic leaders: The development of regulation for the medical marijuana industry is a major milestone. “This is a pivotal moment in the history of marijuana in Humboldt County and California,” she said. “It’s a big deal, really, and it’s important we do it right and that we gather input from all sides of the community.”

Again, a downloadable version of the ordinance is available through this link. 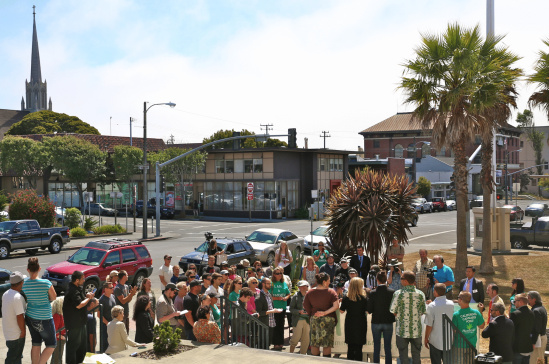 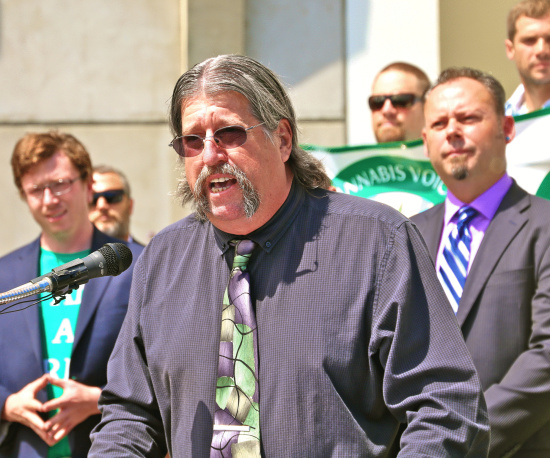 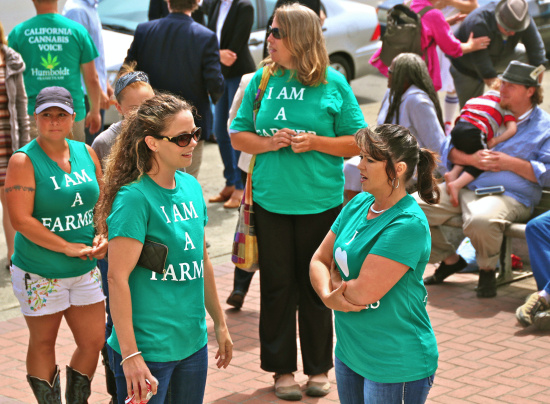 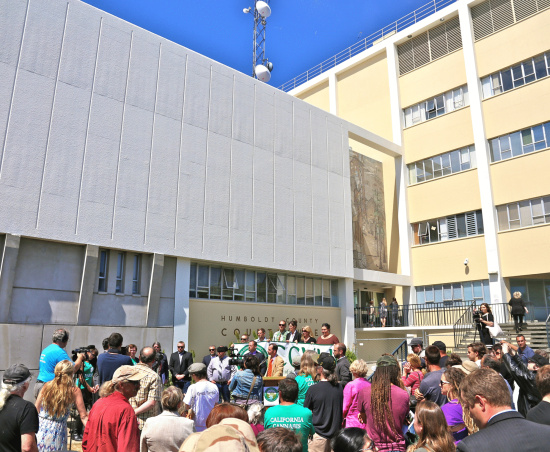