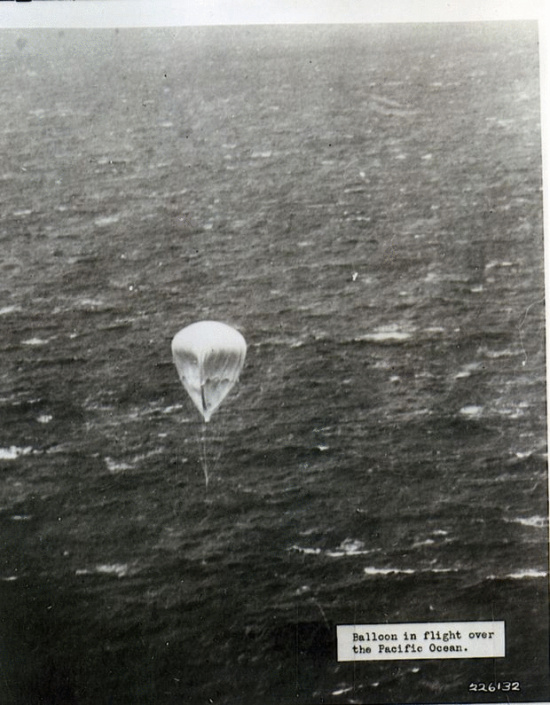 This week’s Radiolab podcast looks back at Japan’s secret balloon-based attack on the United States. In the waning days of World War II, the Japanese military launched giant hydrogen balloons into the jet stream, there to carry bombs across the Pacific and drop them on random spots in the U.S. It was, scholars conclude, a spectacularly ineffective program.

But Hirohito managed to kill an Oregon family with one of the things, and, as Radiolab shows, it did freak out the American war managers for a bit. The whole operation was highly classified on both the Japanese and the United States side for many years, which may be one reason not many locals know of the Battle of Hayfork.

On February 1, 1945 a Japanese bombing balloon was spotted by several local residents drifting over the Trinity National Forest area and slowly descending. No one knew what it was, but an alert forest ranger called the military authorities at the Presidio of San Francisco and reported it. Meanwhile the balloon came to rest atop a 60-foot (18-meter) dead fir tree in the forest near a local road. In the next few hours several people gathered in the area to gaze up at the strange object.

Shortly after dark there was a tremendous blast. The balloon’s gas bag disappeared in a fireball and the balloon’s undercarriage came crashing to the ground. No one was hurt. Forest rangers kept the curious well back from the fallen debris until Army personnel arrived. Upon examination, it was found to be a Japanese bombing balloon with four incendiary bombs and one high explosive bomb still aboard and the bomb releasing mechanism still very much intact. It later proved to be one of the most intact bombing balloons yet to fall into American hands. As was usual in instances of this sort, the local people were told what it was and were asked to keep secret what they had seen.

E Clampus Vitus has apparently put up a plaque near the site, as they tend to do.

Anyway. The whole Radiolab episode is pretty great. No mention of Hayfork, but there is a story of a heroic Utah sheriff wrestling one of the Japanese fire balloons to the ground, as well as the blow-by-blow story of the fatal balloon that landed in Bly, Oregon, and its aftermath. Check it out here.