Next month, members of the Hoopa Valley Tribe will decide whether or not to repeal tribal government’s ban on marijuana cultivation.

A citizen initiative spearheaded by former tribal chair Lyle Marshall would repeal the tribe’s “Title 34,” an ordinance adopted in 1999 that bans all marijuana growing, for any purpose, inside the boundaries of the Hoopa Valley Reservation. Marshall’s petition has received the required number of signatures, and will appear on the tribe’s April 28 ballot. 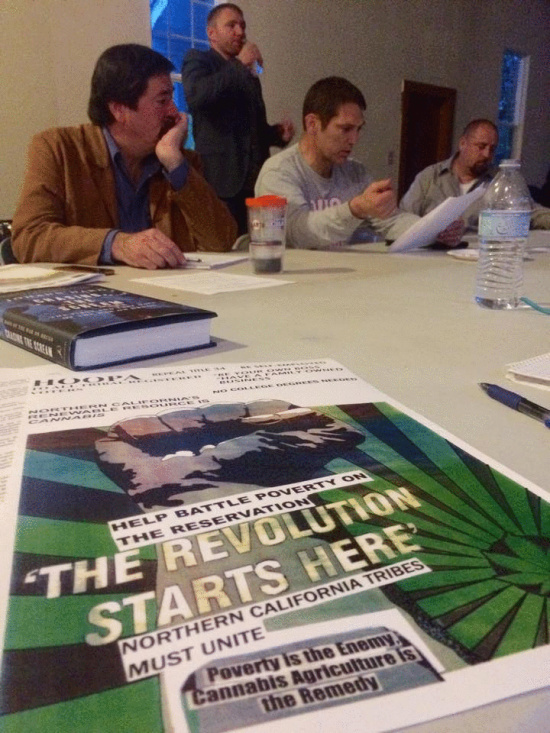 Marshall announced his campaign back in December, shortly after the publication of a new federal government policy that takes a much laxer approach to marijuana enforcement on lands controlled by a sovereign Native American nation. He has been holding meetings with other community members since, including one last night at the Hoopa Community Center.

“We had our first organizational meeting, and it was fairly small,” Marshall told the Outpost this morning. “But we had some important people come. We have to look at this from the perspective of what the tribe is thinking, and we got some good perspective last night.”

In conversation, Marshall had two main arguments for why the tribe’s strict no-marijuana policy should be repealed. One the one hand, he said, the tribe should be following Humboldt County government’s lead by regulating the impact of marijuana cultivation, rather than seeking an impossible outright ban. On the other, he said, the tribe should be looking at every chance to increase the economic opportunities of its members.

Though Marshall said that it is still to early to determine what direction the tribe might take, post-decriminalization – Title 34 needed to be wiped from the books before such a conversation could even take place, he said – he was disdainful of the approach announced earlier this year by the Pinoleville Pomo Nation in Mendocino County. He said he would much prefer giving individual tribal members freedom to grow, rather than going down the road of a tribal partnership between tribal government and outside corporate interests.

Marshall said that he was pretty confident that his initiative would pass, especially if young people get to the polls.

So far, tribal government seems to be taking a relatively neutral stance. The following was sent to the Outpost yesterday on behalf of deputy tribal chair Wendy George, in response to a short piece KIEM-TV had on the initiative:

The Hoopa Valley Tribal Council is currently considering all implications of cannabis on tribal lands. The Department of Justice’s memo regarding cannabis has not changed marijuana from an illegal drug, but instead only limited federal enforcement priorities of that drug. At the federal level, marijuana is an illegal substance which poses many challenges to the Tribe, including many possible social, legal, and economic effects. The Tribal Council is working diligently to evaluate all of the potential impacts the repeal would have to their community and ensure that voters have materials necessary to make an educated decision. The Tribal Council is working towards a decision that is in the best interest of all tribal members, not simply those that hope to profit from such an enterprise.