Have You Always Dreamed of Being a Eureka School Board Trustee? Guess What! » 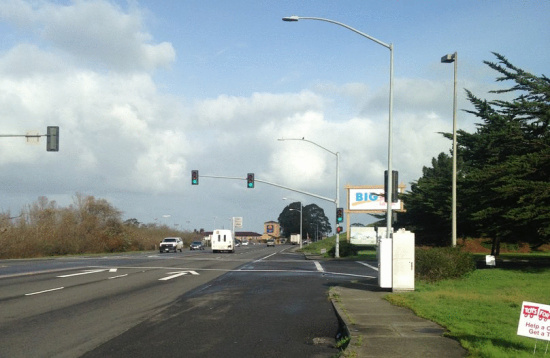 South Broadway is probably the most visually appalling stretch of Highway 101 between Santa Rosa and Coos Bay. If you’ve talked to passers-through, you know that it puts many people off the Queen City of the Ultimate West forever.

You can tell them: No, just turn off the main drag for a couple of blocks! Eureka is actually one of the most architecturally interesting towns in California! They don’t listen; all they remember are the fleabag motels, the jumble of strip malls and vacant buildings, the acres of asphalt. First impressions are powerful things.

City government and various business and tourism associations have long acknowledged the problem, and, with the support of Caltrans, they’re starting to tackle it. They’ve hired a Chico-based consulting firm – Greendot Transportation Solutions – to help come up with a plan, and they’ll be holding a public meeting at the Wharfinger Building next Wednesday, March 11, at 5:30 p.m., to solicit citizen input. At this point, they’re looking specifically at the stretch of road between the Herrick overpass and Pierson’s – not to replace the worst of the blight, but to present a nicer face.

They’ve set up a simple website – www.eurekasouthentry.com – to give you an idea of what they’re hope to accomplish. Excerpt:

More of this at the site, along with some visual brainstorming from the consultant and imagery from successful “gateway improvement” projects elsewhere.

Remember: Next Wednesday. Your invite is below. And don’t just copy Friend o’ the LoCO Doug Shrock’s idea! 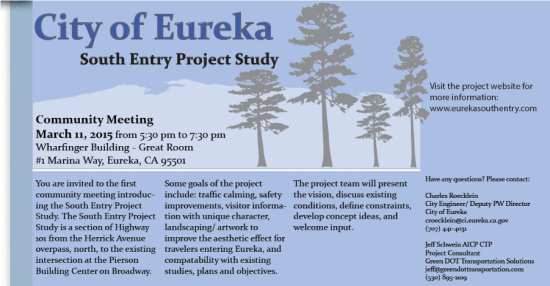