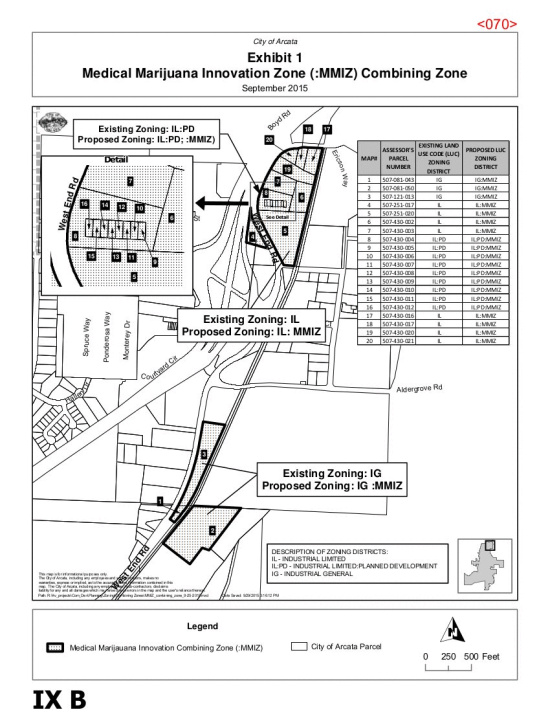 The city voted to introduce Area A of the MMIZ last Wednesday. By Arcata Planning Commission.

Attorney Tom Herman represented the businessmen at last week’s city council meeting, and said his clients are not receiving equal treatment with other property owners in the zone. 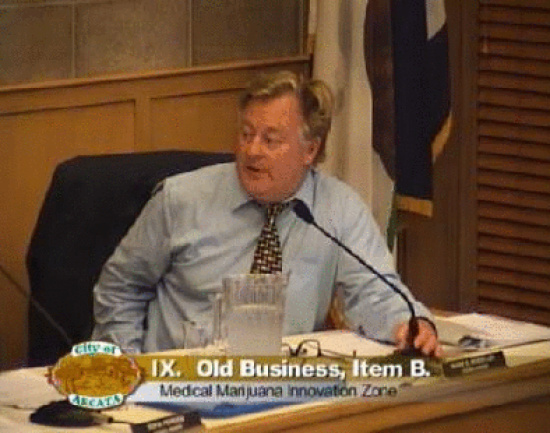 “There are a whole lot of things that were flagged in that discussion that need to be addressed before moving forward.” Councilman Wheetley

“Your ordinances must be fair and impartial. They can not be arbitrary, discriminatory or unreasonable and they must be reasonably related to the public welfare,” Herman said during the public comment portion of last Wednesday’s council meeting. “When we’re picking the geographic area, if there are similarly situated properties, they should all be included to avoid being arbitrary, discriminatory or unreasonable.”

The proposed marijuana zone was originally confined to the city-owned flakeboard facility. However, the zoning has since expanded to three sections of publicly owned parcels within the industrial park.

Councilmember Mark Wheetley told the Outpost there are a many issues that need to be addressed before moving forward.

“Through [the Planning Commission’s] deliberations, they expanded it to include some other properties. There was expressed interest by other property owners and there was kind of a cascading effect where owners either wanted their properties included or excluded,” Wheetley said. “It was a little unclear who had been officially noticed and who learned about it though the grapevine.”

When the unincluded landowners learned of the proposed marijuana-friendly zoning, they organized and promptly submitted a grievance letter to the city on Oct. 2.

“We believe our properties and investments would be protected if the [marijuana zone] concept was either abandoned or if our properties were to be included within the zone,” the group said in the letter. “If our properties are included, there is no guarantee that we will not suffer, but at least it will give us the same options and equal opportunities as the surrounding properties.” 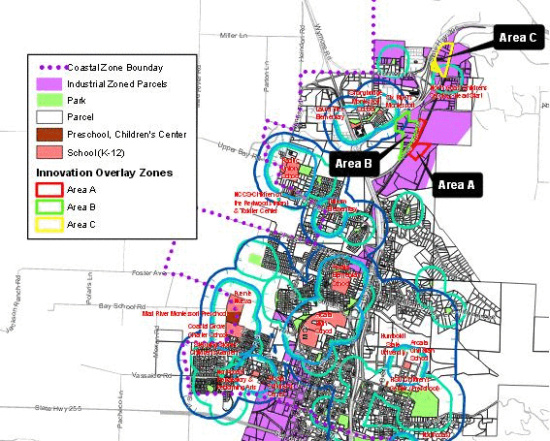 The city is considering adding parcels to Area C of the MMIZ. By Arcata Planning Commision.

Co-owner of O&M Industries and affluent Republican Rob McBeth, who hosted an Arcata town hall meeting for U.S. Senate Candidate Carly Fiorina in 2010, is among the owners pushing to be included in the medical marijuana zone.

Many of the business owners represented in the letter could not be reached for comment to determine if they were solely concerned with property value, or were seriously considering expanding into the medical marijuana business.

However, Robert Nelson, owner of Northwest Forestry & Marine Inc.,  told the Outpost that the landowners were very concerned with how this ordinance would transform the physical and cultural nature of the area.

“Most of us didn’t know this was going on. When you do something like that zoning-wise, it affects property values,” Nelson said. “A lot of people weren’t included that own property here in the industrial park. Our life’s work has gone into building up this area, and to be excluded from this would be a slap in the face.”

During the meeting, Councilmember Susan Ornelas said she was in favor of adding all the signatories to the letter to Area C of the proposed zone.

“I see some benefits to including them. To be really democratic we needed a few people involved so that prices for facility use are competitive,” Ornelas said. 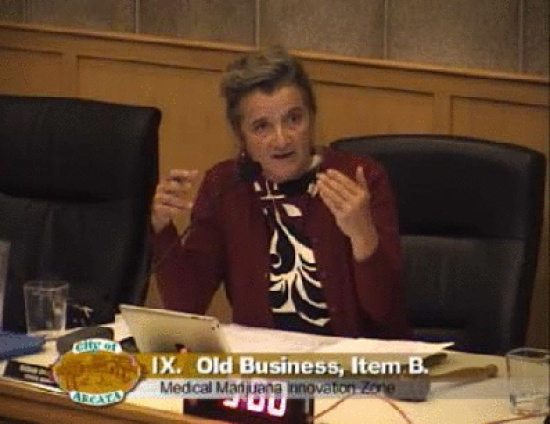 But Councilmember Wheetley thought that the city should avoid making any quick decisions on the issue, and suggested that the city could talk with people who wished to be included in the new zone going forward.

“This has the potential to transform that whole area of Arcata, and there are some significant businesses that are the most lucrative in the city,” Wheetley said. “You’ve got potential litigation out there. This is a huge leap forward. I think we need to have a thoughtful conversation with business in that area.”

The council unanimously voted to introduce the Medical Marijuana Zoning Ordinance that was before them during last week’s meeting. However, Councilmember Wheetley said that before it is officially adopted more zoning changes will likely be made following a public workshop that will be held on Oct. 28 at Aldergrove, where landowners can publicly express their concerns with the city.

A draft ordinance for Area A will be on the agenda for adoption during the next Arcata City Council meeting on Oct. 21.