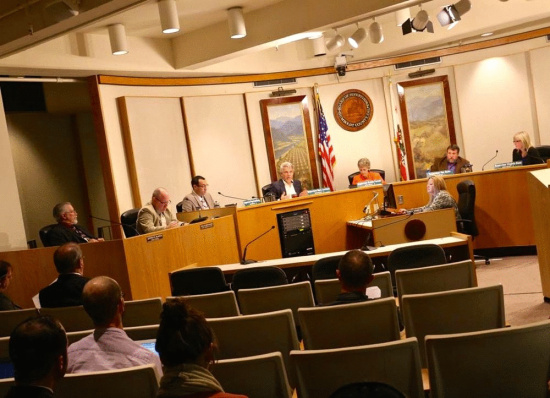 Fennell said she worried that requiring permits for grows of up to 2,000 square feet “would be a barrier to bringing people into the fold” of regulation.

The board also expressed concern about the draft ordinance’s apparent allowance for indoor grows of up to 22,000 square feet, as well as the forbearance period for water diversions and terms for bringing preexisting grows into compliance.

The discussion largely centered on a three-tiered permitting network that was illustrated in a color-coded matrix projected onto two large screens in the board chambers. Here’s that matrix, which you can click if you’d like to see a big pdf version: 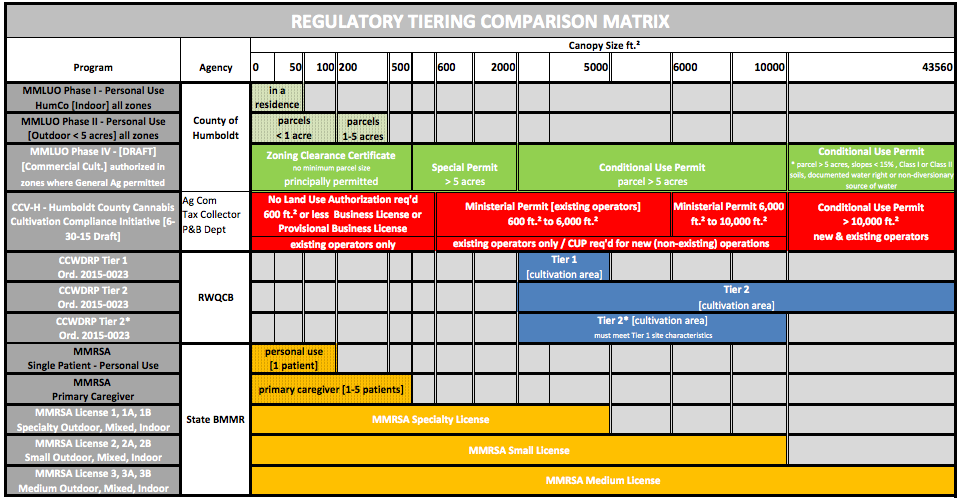 County staff is working on a tight timeline, rushing to get an ordinance through the Planning Commission, passed by the Board and in place no later than March 1. Planning and Building Director Kevin Hamblin and Senior Planner Steve Lazar explained that the lines in the green section of the matrix can still be moved around. In other words, the size thresholds for each type of permit can be changed by the Planning Commission or the Board; they’re not set in stone.

“The county’s draft as currently written creates a point of entry so overly burdensome and so unrealistic that cannabis farmers in Humboldt County will see no option but to continue to operate in an unsustainable and unsafe black market rather than meet these punitive regulations,” Powell said. He went on to coyly suggest the Board consider a different draft ordinance, a “superior document” — obviously referencing his own group’s effort.

Luke Bruner, another member of CCVH, though he said he was speaking as a private citizen, called for the inclusion of a tax measure in conjunction with the ordinance. Staff later assured the Board that they haven’t abandoned that endeavor.

Natalynne DeLapp, executive director of the Environmental Protection Information Center (EPIC), echoed her enviro colleagues, thanking staff and the board for their efforts while calling for regulations that don’t scare off growers. She also asked for a cap on maximum grow size and said her organization is “not thrilled to see large indoor grows allowed in rural areas.”

The only person who spoke in defense of the staff’s draft ordinance was Scott Bauer, a senior environmental scientist for the California Department of Fish & Wildlife, who thanked staff for developing “a robust regulatory framework that would let us work through the environmental issues” associated with the illegal cannabis industry.

Lazar, the senior planner, reiterated that both the Board and the Planning Commission have the authority to scale the regulations back without running afoul of the California Environmental Quality Act (CEQA).

Reassured of their flexibility, the board asked staff to present a range of options to the Planning Commission, perhaps by inserting some more green lines in the “Regulatory Tiering Comparison Matrix.”

“Good luck,” Fennell quipped to staff. “May the force be with you.”

The Planning Commission will take the reins on this ordinance at its Nov. 5 meeting, where it will have the latitude to adjust many elements of the staff ordinance, from the performance standards required for permits to the types of permits required to the particulars of oversight and inspection. Staff said they hoped the Planning Commission will discuss the ordinance at two meetings, at least, before sending it back to the Board.