County Says ‘Nothing Changed’ As a Result of HumCPR Lawsuit; HumCPR Begs to Differ 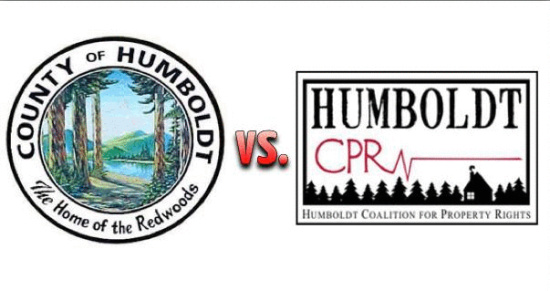 More than three years ago the private political corporation Humboldt Coalition for Property Rights (HumCPR) sued the county government over the issue of “shaded” parcels (a practice we’ll explain below). The suit was settled last week after costing the county $88,000 in outside legal counsel, plus an untold amount of staff time.

The county, however, says it was already doing all that — that it had, in fact, notified all owners of “shaded” parcels back in 2011, before the lawsuit was filed. And while it has agreed to stop shading parcels, the county will still keep track of parcels with uncertain legal status. It will just do so via a computer database rather than using pencils to shade in those parcels on a map, coloring-book style.

Confusing? Yes. Let’s back up a bit. What exactly are shaded parcels?

First, it’s important to note that the Assessor’s Office and the Planning and Building Department keep separate records for separate purposes. And historically the two departments haven’t always compared notes on a regular basis to make sure their records aligned. The planning director’s primary concern is making sure parcels get developed and subdivided (or “split”) in a legal manner. So he doesn’t much care about the tax status of those parcels.

By the same token, the assessor is primarily concerned with collecting taxes and thus doesn’t much care whether or not a parcel was subdivided legally or illegally, so long as someone is paying the tax bill. If, for example, a Southern Humboldt man wanted to split off his back 40 so his daughter can start paying taxes on it, the assessor might happily oblige by creating a new assessor’s parcel number (APN) and sending out a separate bill. That doesn’t necessarily mean the new 40-acre parcel was created legally, per the state’s Subdivision Map Act, and so there might be no record of it over in the Planning and Building Department.

Over the years, whenever Planning and Building Department staff came across a parcel in the parcel-map books for which they had no official record, they would take a pencil and shade it in. These shadings, officials say, served as an internal heads-up to fellow staff members, like Post-It notes warning co-workers not to issue any permits until the parcel’s legal status was resolved.

Over the course of about 30 years the county accumulated a sizable backlog of these shaded parcels — about 1,600 parcels whose legal status was unknown. In 2011 the county set about trying to clear up the confusion. In September of that year staff sent out letters to everyone in the county who owned parcels of uncertain status, informing them of that status and giving them instructions on how to proceed. The county also hired two new planners including one, Cliff Johnson, specifically tasked with un-shading the parcels in question.

Many property owners were taken aback by the letters the county sent out. They interpreted them as a notification that their property was somehow illegitimate or illegal.

In March 2012, HumCPR filed its lawsuit. From that group’s perspective, the parcel shading was some sort of official designation, a classification that tainted the properties — like the “mark of Cain,” as a LoCO commenter put it — and thus harmed property values and could foul up real estate deals.

Humboldt County Counsel Jeffrey Blanck said that was never the case since all property owners have to prove the legality of their parcels before permits are issued.

In its lawsuit HumCPR also argued that by sending out notification letters the county was admitting that it knew properties were out of compliance — for years, in many cases — but failed to notify property owners in a timely manner, as required by California Government Code section 66499.36.

The county, in response, reiterated that shading represented no such thing — that a question of legality does not equal a lack of legality.

This wasn’t the only lawsuit HumCPR filed against the county. In 2011 the group sued in an effort to get the county to disclose how much staff time had been spent litigating some specific land use cases, including a lawsuit against SoHum landowner Bob McKee and others over subdividing the Tooby Ranch property near Garberville. That suit was settled in 2013, with the county agreeing to pay HumCPR $100,000 in attorney fees.

It’s worth noting, here, the profound shift in political dynamics that occurred over the course of this drama. Many of the fundamental players in the early days of HumCPR, including cofounders Lee Ulansey and Robert Morris, former board member Ben Shepherd and Estelle Fennell, who served almost three years as the group’s executive director, are now key figures in the very government that the group alleged was threatening property rights. Ulansey, Morris and Shepherd have all been appointed to the county Planning Commission. And as the 2nd District county supervisor, Fennell has been one of the primary players in negotiating settlements with the very group she used to represent.

The settlement announced this week (which you can read in its entirety here) is long, wordy and seemingly contradictory.

For example, the agreement appears to say that the county will no longer keep track of parcels that have uncertain legal status under the Subdivision Map Act. According to paragraph 2(A), the county won’t shade them in on maps, it won’t maintain a written record of them, and it won’t record them “in any electronic or computerized system or program … .”

And yet paragraph 2(C) states, “The Planning Division shall maintain a list of the parcels for which it is unable to resolve compliance status, which it shall make available to the public upon request and to HumCPR’s executive director.”

Blanck, the county counsel, said the settlement won’t change how the county operates. “Basically, there’s no real difference in procedures,” he said earlier this week. The county is still working to clear its backlog of shaded parcels. (It has about 600 left to work through.) The majority of those cleared up thus far were, in fact, legal, according to Blanck. Every once in a while, a new parcel-of-uncertain-status will show up — about five-to-seven per year, Blanck said. In those cases, the county will research the compliance status and notify the property owners accordingly.

This, said HumCPR Executive Director Ziegler, is the key outcome of the settlement. The county will clear up all the shaded parcels to the extent possible, and henceforth it will promptly notify all property owners when there’s a question about their parcels’ legal status.

“They weren’t necessarily doing that beforehand, or they weren’t required to,” Ziegler said.

Blanck acknowledged that while the county was already well down that particular path, the settlement agreement makes it official.

“Now it’s in a court order, so that’s probably accurate,” he said of Ziegler’s assessment. “We committed to finish doing what we already started.”

But some disagreement — or confusion — remains. In discussing the settlement Ziegler again asserted that a shaded parcel “has a cloud on its title” and has been “incorrectly deemed illegal.” When pressed he acknowledged that they were merely deemed “indeterminate.” But that wasn’t the main problem, he said.

“Our major concern was that shading them was not necessarily a legal or accepted practice,” he said. “I don’t believe that [technique] was employed anywhere else.”

The Outpost asked how much HumCPR has spent on attorney’s fees in the case. Ziegler responded via email, saying, “The County is responsible for attorney’s fees, per the settlement agreement.”

In fact, the settlement agreement states (in paragraph 3) that the matter of attorney fees “shall be submitted for court resolution.” Blanck believes the county probably won’t have to pony up for that particular bill. He can’t be sure what a judge will do, he said, but he argued, “There’s a heavy burden for them [HumCPR] to have done something of significant public benefit that would not have occurred without this lawsuit. I don’t think they can meet that burden.”

Reminded of the wording in the settlement agreement, Ziegler followed up with the following email message:

“I don’t feel it’s appropriate to speculate what decision the court will ultimately arrive at with regards to the resolution of attorneys’ fees. I respect Mr. Blanck and his opinion, but disagree.” He declined to state how much the group has spent on the case.

HumCPR is required to file a “motion for award of attorneys’ fees and costs” by Oct. 22. Both sides retain the right to appeal whatever decision a judge reaches on the matter.