Two Native American entities from Mendocino County have filed suit against Caltrans in federal court today, citing what they call an “ongoing failure to properly identify and protect … ancestral, sacred, cultural, and archaeological sites” in the construction of the Willits Bypass.

They’re asking the court to halt all further work on the bypass until it is determined that the project is in compliance with the National Historic Preservation Act, and for damages to sites they allege have already been destroyed.

According to a complaint filed in the U.S. District Court in San Francisco today, two Northern California Indian Tribes contend that Caltrans, as well as various federal agencies, have destroyed known archaeological sites and failed to properly protect historical sites during construction of the Willits Bypass. The action was filed by the Coyote Valley Band of Pomo Indians and the Round Valley Indian Tribes for violations of the National Environmental Policy Act and the National Historic Preservation Act. The Willits Bypass Project is a 6 mile long rerouting of Highway 101 through Little Lake Valley, near the city of Willits, in Mendocino County.

Former Congressman Pete McCloskey of Cotchett, Pitre & McCarthy stated: “It is outrageous for Caltrans to refuse to properly engage in government-to-government consultation with the Tribes over their ancestral lands. These historic properties include archaeological and ethnographic resources, as well as isolated human burials. Even though Caltrans has been constructing the Willits Bypass Project for over two years, Caltrans has yet to implement a process for identifying historic properties, cultural resources, and archaeological sites.”

Michael Hunter, Chairman of the Coyote Valley Band of Pomo Indians, declared: “Our Tribal elders realized it is time to stand up to the aggressive and resistant manner Caltrans has treated the local Tribes. Caltrans refuses to protect our cultural heritage. On September 12, 2013, in the dead of night, Caltrans’s bulldozers destroyed one of our sacred sites in Little Lake Valley without tribal monitors notified or present. The National Advisory Council referenced the destruction of this ancient village as a ‘major violation of federal law.’ Yet Caltrans refuses to protect ancestral archaeological sites. We ask other Indian nations and concerned citizens to join in demanding Caltrans protect our heritage and that government-to-government consultations with Tribes be conducted meaningfully and respectfully.”

James Russ, President of the Round Valley Tribal Council, said: “There was a complete lack of Tribal consultation, as well as no planning or preparedness to address Tribal concerns, prior to starting construction of this Project. Since the beginning, Caltrans has known the Project area has a moderate to high potential for buried archaeological remains. Because Caltrans continues to proceed in bad faith, for example, isolating our Tribal monitors, we are practically forced to look to the Court to protect our religious, ancestral, and cultural properties that are being desecrated by the Willits Bypass. Our main objection is not the Bypass project in itself, but the reckless way that Caltrans conducts business with Tribes and Tribal communities. Our Tribe does not take lightly the disrespect to our sacred sites and our Tribal people.”

Prior to this action, the Tribes requested Caltrans issue a Supplemental Environmental Impact Statement to address the numerous historic sites that have been discovered in the Project area and the Mitigation parcels. Caltrans refused. The Tribes also contend Caltrans failed to exercise due diligence in its archaeological survey efforts for the Project, conducting only surface surveys in a wetlands area covered by grass. The Complaint asserts that, due to ongoing construction activities, sacred site identification occurs only after ground disturbing activities are completed. By way of relief, the Tribes request the Court immediately protect these areas, including by temporarily suspending construction activities on the Willits Bypass Project in order to address ongoing damage to sacred and cultural sites.

The Coyote Valley Band of Pomo Indians and the Round Valley Indian Tribes are represented by Joseph W. Cotchett, Philip L. Gregory, and Pete McCloskey of Cotchett, Pitre & McCarthy, along with co-counsel Sharon Duggan. 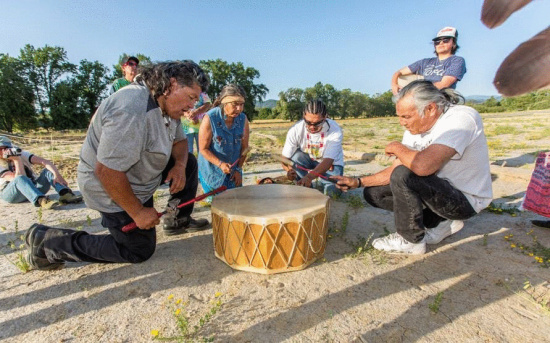