Caltrans on New Willits Bypass Lawsuit: ‘All Historical Preservation Laws are Being Followed’ » 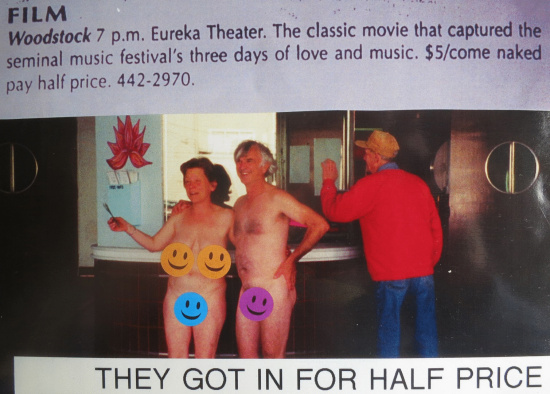 LoCO columnist Barry Evans and friend at the Eureka Theater in 2002, not breaking any law.

Among the items on Tuesday’s Eureka City Council agenda will be a proposed ordinance banning public nudity in the city limits. That’s right — there is no such law. If you’re in the habit of parading around town starkers, your days of that may be coming quickly to a close.

The ordinance, which, if passed, would be enshrined in Eureka Municipal Code at §130.09, would make public nudity a misdemeanor punishable by a fine of up to $1,000, prosecutable by the city attorney.

Why is this necessary? According to the staff report:

EPD has recently been faced with an inability to deal with individuals who have exposed themselves in various areas of the City such as parks, playgrounds, Old Town and the Bayshore Mall. Members of the community have voiced their concerns, however, the City does not have a provision within the EMC to address the offending behavior.

You might think: Isn’t that already illegal? Under state law, maybe? Not exactly. California Penal Code §314 makes criminals out of people who lewdly display their private parts. To see such a case to prosecution, in other words, a Eureka police officer has to make some sort of plausible case about the nudist’s intent. A local ordinance would do away with that cumbersome bar.

All well and good, but the Outpost begs leave to ask a couple of questions. Take a look at what, specifically, this proposed ordinance defines as nudity:

Several exceptions are enumerated. The law would not apply to children under the age of five, breastfeeding women, “theatrical performances” or brief nudity within a bathroom or locker room.

But does the city truly intend to criminalize deep v-cut tops and dresses? The plain language of the ordinance clearly states a wearer of something as innocuous as this women’s halter bikini top would be on the wrong side of the law.

And that’s just the superficial point. Is it still considered Constitutional, in this day and age, to deny women rights allowed to men? Can you still say that what is good for the gander is not good for the goose? The city of New York has been trying and mostly failing to assert just that in recent months. This Time Magazine post suggests that the situation is somewhat different in California, and that Eureka would be in good company if it were to ban the bare female breast while blessing its hairy male counterpart.

To some, from a 14th Amendment perspective such laws seem increasingly anachronistic. We’ll see what Eureka’s all-female City Council has to say about that at its next regular meeting — Tuesday night (election night!) at 6 p.m. at council chambers in Eureka City Hall. That’s 531 K St., Eureka.