« Last Night’s Homelessness Debate: City of Eureka Caught Between a Rock and a Marshy Place

UPDATE, 4:25 p.m.: Well, here is an interesting turn of events! It seems that some AT&T customers are more equal than others, and they have not gone offline at all today. Check the following series of tweets from Friend o’ the LoCO @GregGehr:

NOt all AT&T is down in Eureka. This is the speed on my dedicated fiber from AT&T, FASTER than it has ever been! pic.twitter.com/3jjz6oWWGW

So why is @ATTBusinessCare down for Cell phones, and DSL, but NOT fiber connections in Humboldt County???

Is @ATTBusinessCare only giving access to redundant fiber to high volume business customers instead of sharing with everyone?

The answer to that question seems to be “Yes. Yes, it is.”

If you need a second data point: Friend o’ the LoCO Patrick Cleary tells the Outpost that AT&T service to the Humboldt Area Foundation out on Indianola Road has been just fine all day long. Nary a problem. The Area Foundation, Cleary confirms, likewise has its own dedicated fiber from AT&T.

So some Humboldt County AT&T customers get to keep their Internet and phones today, despite the fiber cut in Hopland.

How does that work? Follow along, here. We’re going to theorize. Let’s agree on a couple of principles.

The above four bullet points are incontrovertible facts. Let us now hypothesize.

Could it be, as @GregGehr reckons, that AT&T leases space on the east-west line to keep its high-rolling, more-than-$1,000/month customers juiced up, while telling the rest of its customer base to go pound sand?

It’s an interesting theory, isn’t it?

We’ll leave you, for now, with the following message from the Fortuna Police Department. Safety first!

IMPORTANTCell phone systems and most communications are unstable in several northern California counties right now. Unless it is an emergency - please stay off your phone.

UPDATE, 1:20 p.m.: Paul Ramey, a staffer for Assembleymember Jim Wood, replies to the Outpost’s query about the failure of our redundant fiber line to kick in:

We do not know at the moment.  We have calls in to the Governor’s Office of Emergency Services and to AT&T, trying to figure that out. We will keep you posted as soon as we learn something.

UPDATE, 1:10 p.m.: So we all seem to be consensing on the idea that the fiber was cut, somewhere in Hopland. State Sen. Mike McGuire has tweeted this; Assemblymember Jim Wood’s office verifies it in the LoCO Country Club (below).

But this leaves us with questions. First: What of the other AT&T outages reported elsewhere in the state and nation today? Second, and most importantly: What the damn hell about our redundant fiber? Wasn’t this never supposed to happen ever again?

We have questions in to McGuire’s office and Wood’s office, since they seem to be the people with the most firsthand knowledge of the situation at this point. As yet, we have not heard back. We will tell you what they tell us, if and when we hear from them.

Meanwhile, we pass this message on to our Mendocino County readers, via the National Weather Service:

There is a communications outage in parts of northwest California. At the current time, Mendocino County is experiencing…

911 service being rerouted. Phone company on scene, working on fix. Let us know if you have been impacted. We’re working with phone company.

The fiber cut happened in Hopland. Reports from thru out North Coast of impacted land line & cell service. Crews on scene now.

Which would explain why only the North Coast is whining about down Internet, but not why other regions of the state and nation seem to be out as well — at least according to the downdetector.com map. We’re asking McGuire what else he knows….

UPDATE, 11:30 a.m.: We’re feeling a little bit all alone out here. For whatever reason, there seems to not yet be any notice of the outage in the areas in red to our south. Twitter, Google News — everyone is silent on the Great AT&T outage except Humboldt County. And AT&T has not released any information yet.

More information on the telephone and internet outages. Seems to be ATT’s issue, but stay aware. 911 services is also affected in Mendocino County.

But some government non-emergency lines are problematic. Sheriff Downey had to borrow Undersheriff Bill Honsal’s (non-AT&T) cell phone to ring us up.

Many local businesses are unable to process credit cards at the moment, and some ATMs are down. Lunchers beware.

All told, the North Coast seems to be out all the way up the line. 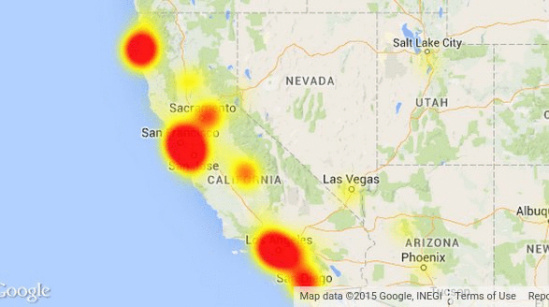 There seems to be a nationwide AT&T outage happening right now, according to the zillions of folks who complain to downdetector.com.

No word on why yet. We will update.