About That Stat: No, the Average Humboldt Resident Does Not Take 14 Vicodin Per Day

Back in January, the Outpost examined Humboldt County’s opioid epidemic and the work being done to address it. In short, our overdose death rate is (and has long been) more than twice the national average, largely due to abuse of heroin and prescription painkillers. Local health care officials have embarked on several initiatives to bring the numbers down, coordinating with neighboring counties and among various agencies to build a more integrated health care system, and the efforts appear to be working.

Mixed in with all the quotes and data in that story was one particularly eyebrow-raising statistic. A local official said that in one recent year the average Humboldt County resident — accounting for every last man, woman and child — consumed the equivalent of 14 Vicodin per day.

The real average, it turns out, is a little bit less than one Vicodin per person per day. Unfortunately, the erroneous 14-per-day figure has since been repeated in numerous places online and even found its way into a March 15 presentation to the Board of Supervisors, some of whom expressed justified astonishment.

Credit for sniffing out the falsity of the stat goes to bestselling author/Eureka Books co-owner and all-around smart person Amy Stewart, who emailed this reporter with the question he should have asked himself at the time: “Really?”

After several emails and phone conversations with county and health care professionals, not to mention lots of squinting at spreadsheets, we eventually figured out that the mix-up stemmed from a simple misunderstanding in the not-so-simple world of statistics.

Ron Largusa, epidemiologist at the Humboldt County Department of Health and Human Services (DHHS), admirably took the blame for the mix-up. He said he’d provided an official with a statistic about the strength of the average Humboldt County prescription, but he’d done so in a way that left the door open to confusion.

“I take responsibility,” Largusa said in a recent phone call.

The Outpost, for the record, regrets not fact-checking the stat.

So! Now that we’ve straightened that out, we thought it would be worthwhile to take a fresh look at Humboldt County’s prescription painkiller situation, as expressed in some newly released data from the California Department of Public Health. And as a reward/punishment for ferreting out this misunderstanding, we asked Amy Stewart if she’d like to take a crack at parsing the data.

We’ll offer a brief update and some explanatory information from DHHS at the bottom of the post, but for now we hand it off to Amy:

In my pre-Humboldt County life, I worked as an analyst for a government agency. It was my job to crunch the numbers and come up with useful data to help my boss make decisions. I don’t often think back fondly on my days as a cubicle-dweller, but when I started pestering Ryan about that 14 Vicodin per day number, which just sounded wrong to me, I found myself getting sucked back in to the peculiar joys of data analysis.

Disclaimer: I’m a writer and a curious citizen, not a public health official. But I do have a master’s degree in city planning, which gave me the coursework and expertise I needed to get that analyst job. This is all my own analysis, using only this publicly-available data. What I did was to fall back into my old number-crunching ways and ask the question: What information can be gleaned from this data to help us make better decisions?

Here’s what I’ve got.

What public health officials actually meant was that when opioids are prescribed, they are prescribed in such quantity that the patient has been given, on average, the equivalent of 14 Vicodin per day, every day, for the duration of their prescription.  [Editor’s note: Not all the pills in a prescription are necessarily consumed. See below.]

In other words, it’s a measurement of how strong the prescription is on a daily basis.

So. Is that a good number or a bad number?

Let me stop right here and say that overall, for all of this data, Humboldt ranks about 43rd out of California’s 58 counties on just about every measurement of opioid prescribing. So we land right in the middle of the bottom half of California counties. That’ll be true for all of these numbers.

But—it turns out that California is exemplary! Take a look at this CDC chart that shows the painkiller prescription rate by state.

California is the second lowest—meaning second best—in the country.

So as we compare Humboldt to the statewide average, keep in mind that California is already the second-best in the nation. Which is not to say that we can’t do much better.

OK, back to those 14 Vicodin per day per prescription. 14 Vicodin a day sounds like a lot to prescribe to somebody! How are we doing against the state average? I’m using raw data here, not estimated Vicodin per day, but trust me, it’s the same. 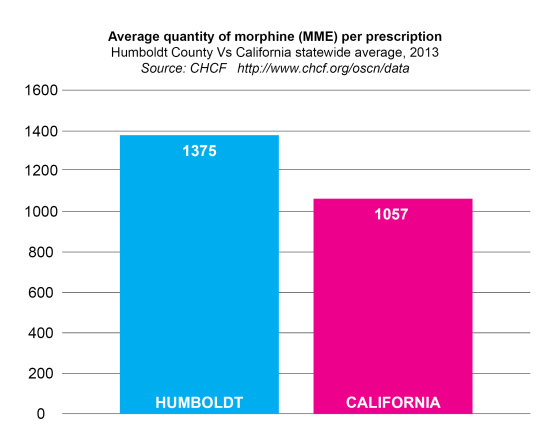 OK, so we’re about 30 percent higher than the state average when it comes to how much opioids (or morphine milligram equivalents, MME) patients are getting when they pick up that prescription. So that could be better. But is the amount of opioids per prescription really the problem, in spite of how often the number’s been quoted and mis-quoted?

So is that a good number or a bad number? I’ll show it to you in both morphine equivalents and Vicodin per year, but you’ll see it’s exactly the same information. 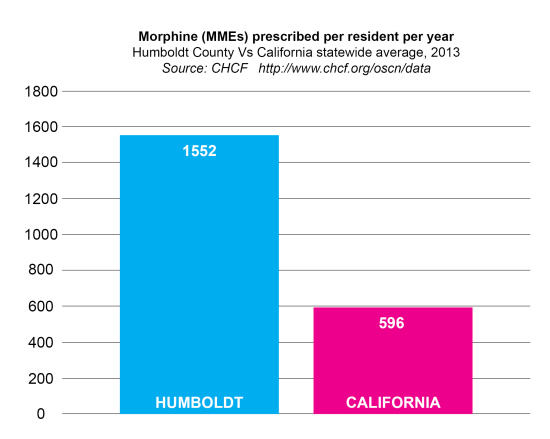 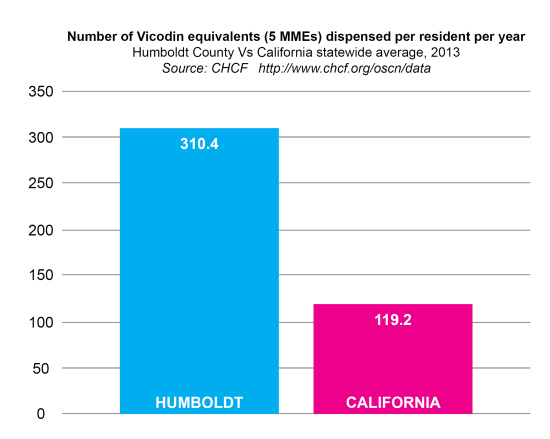 That’s not so great. We’re almost triple the state average.

So what, exactly, are we doing wrong in terms of prescribing? It turns out that the data tells us pretty clearly how we are doing on several more specific indicators. By drilling down into this data, we can find problem areas to focus on. 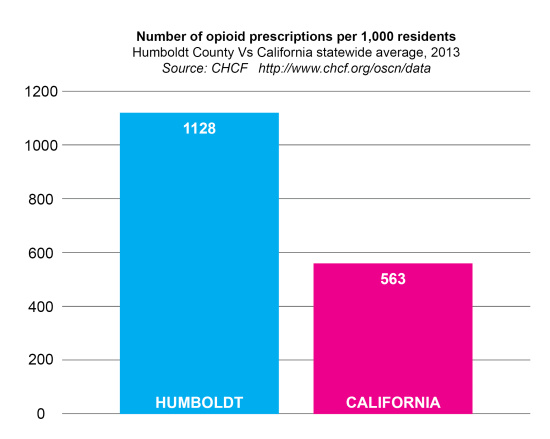 Next, we can look at how many residents are prescribed the equivalent of more than 100 mg of morphine per day, for at least 30 days. Here we are almost triple the state average. So perhaps we could look at ways to get the high-dosage patients on lower doses. 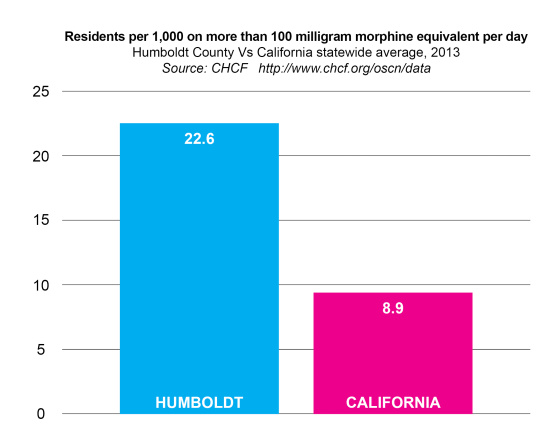 What about long-term use? Here again, Humboldt is roughly triple the state average. Perhaps we should find ways to avoid prescribing long-term usage of opioids when people first get sick or injured, and figure out how to taper long-term users off the stuff. 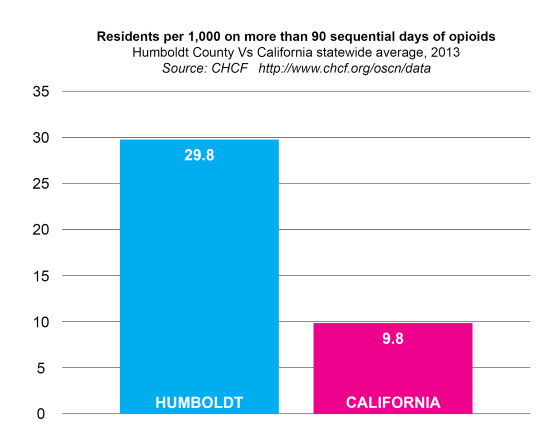 What about doctor-shopping, or pharmacy-shopping (meaning, addicts going to multiple providers to seek out opioids)? Actually, we’re not doing too bad there, as compared to the state average. Always more work to be done, but this one’s okay. 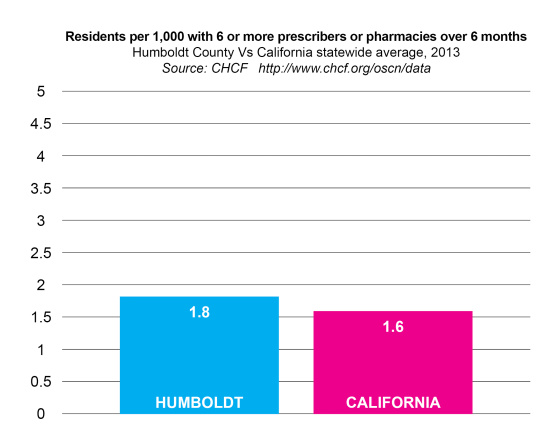 Now, there are always flaws and gaps in data. There’s certainly more to this story than what I’ve presented here. I’m sure our public health officials have a clearer and more detailed picture of what’s going on and what the solutions might be. And of course, this only deals with legally prescribed opioids, not pills that are stolen, sold, or shared. Much is being done already, as Humboldt doctors are now starting to use pain management contracts and other such tools before prescribing opioids.

I just want the public—and the decision-makers—to have information that is accurate and placed within some kind of context, so that we can all get a better handle on this thing.

In the interest of context, DHHS Public Health Director Susan Buckley pointed out that the numbers we’re dealing with can be misleading for a few reasons. First, they reflect the amount of medication prescribed, not the amount ingested. Often, a patient will be given 30 pills after a procedure and only use five. The numbers also include the addiction-treatment drug buprenorphine as well as the large dosages of painkillers frequently given to people in Hospice care.

On the other hand, the numbers in the state database do not reflect medications prescribed through Veterans Affairs clinics, which are managed federally.

County officials are excited to see the latest data from state’s Controlled Substance Utilization Review and Evaluation System (CURES), because they’re expecting to see a big drop in our county’s numbers due to the system overhaul described in our January story. “We do know there’s been a 20 percent decrease in prescribing, which is exactly what we wanted to achieve,” Buckley said.

Partnership HealthPlan of California, the official care provider for the region’s Medi-Cal patients, has worked with local physician panels to reduce over-prescribing, as has the county.

“We’re trying to cultivate awareness on the part of prescribers,” Buckley said. “We’re getting there.”