Arcata Theatre on the Market for $1.85 Million » 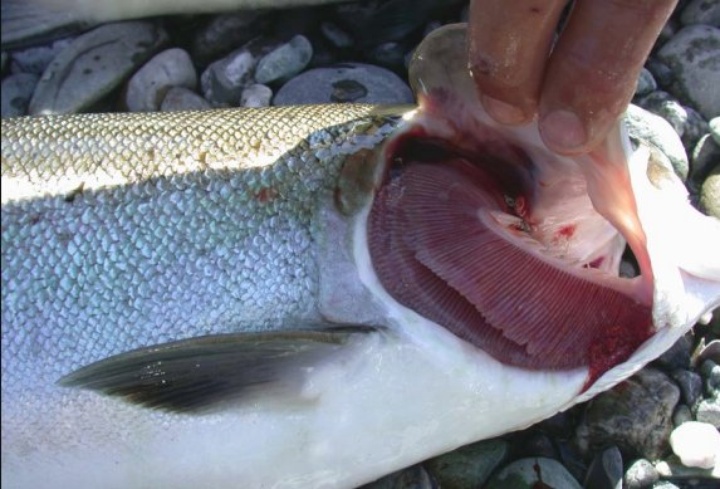 From the Yurok Tribe:

Yurok Fisheries crews conducting routine fish disease monitoring have found that salmon in the Klamath River on the Yurok Reservation are infected with a potentially deadly disease.  Ichthyophthirius multifiliis, which is known as ich (pronounced “ick”), is capable of causing large fish kill events. Ich was the primary pathogen that caused the 2002 fish kill in the Klamath River and killed more than 35,000 adult Chinook salmon and steelhead.  Ich was found at relatively low severity in the Klamath River last year, but is back this year at concerning levels.

“It appears that a small number of adult salmon migrated upriver in extremely warm water temperatures and then became stuck in a relatively small thermal refuge where they are getting infected with the pathogen.  What this means for the health of the fall Chinook run that is yet to migrate upstream is unclear” said Michael Belchik, Senior Fisheries Biologist for the Yurok Tribal Fisheries Program.
Fish diseases such as ich are exacerbated by low flows and water temperatures that currently exist in the lower Klamath and Trinity Rivers.

The Yurok Tribe will be working closely with Federal, State, and Tribal partners to determine what management actions are necessary to prevent further spread of ich and protect the main portion of the fall Chinook salmon run which has not entered the river as of yet.
“We take this threat to our fish very seriously, and we’re looking at every option to protect our fish.  We don’t want to go through another catastrophe like the fish kill in 2002, and we will do anything we can to avoid that outcome this year.” said Thomas P. O’Rourke, Chairman of the Yurok Tribe.