« US Bank in Henderson Center Robbed This Afternoon; Officers Searching For Suspects

My Day Off: Jurassic Park Comes to Life at Fern Canyon » 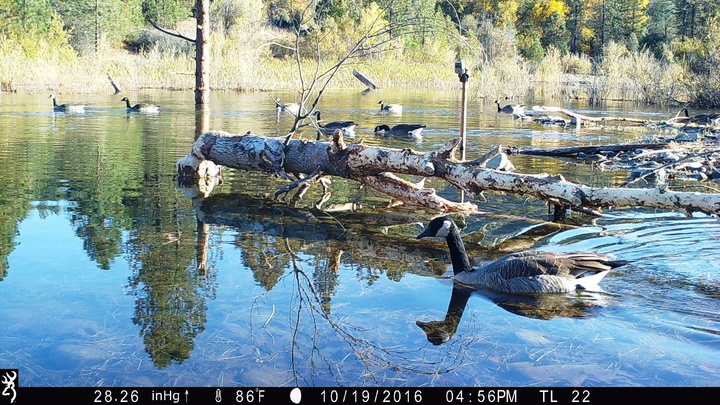 Note: The following story originally appeared in the tribal newsletter Yurok Today. Matt Mais is the tribe’s spokesman. A ribbon-cutting ceremony for the Bucktail Project, described below, will be held Friday from 11 a.m. to 1 p.m. at the project site, near Lewiston.

“As soon as we finish each new feature the fish find their way in,” said Boulby, a veteran heavy equipment operator for Yurok Tribe’s Watershed Restoration Program. “I like doing these kinds of jobs because it’s immediately gratifying to see salmon move into the habitat as we make it.”

Boulby is part of a multiagency crew, including the Yurok Tribe and Hoopa Valley Tribe, which has been constructing the Bucktail Project, an extensive river restoration undertaking on the Trinity River. On several different days during construction, the Yurok Tribal member and others in the crew saw salmon — both smolts and adults — and even Pacific lamprey, entering a freshly made side channel. Within a week of the channel’s completion, Chinook salmon were seen spawning in the new gravel bed and jumping over a human-made beaver dam to enter a wetland. Beavers moved into a wetland and began building a new home two-weeks later. 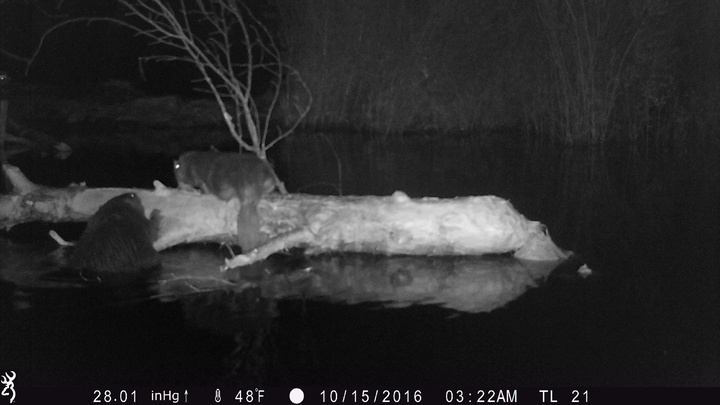 Beavers spotted by the motion-capture camera. The industrious rodents have been adding to the restored habitat. | Image courtesy Yurok Tribe.

“The Yurok and Hoopa Tribes worked together to create more than a hundred acres of high quality salmon habitat on the Trinity River,” said Richard Nelson, Director of the Yurok Watershed Restoration Program. “In terms of its potential to increase fish populations for future members of both tribes, this was the most phenomenal project that we’ve ever completed. It was amazing to see these results in such a short period of time.”

The Bucktail Project, located about ten miles east of Weaverville, is funded by the Trinity River Restoration Program. The Yurok Tribe and Hoopa Valley Tribe collaborated on the construction project, which aims to improve salmon and steelhead habitat within the 110 acre project area. 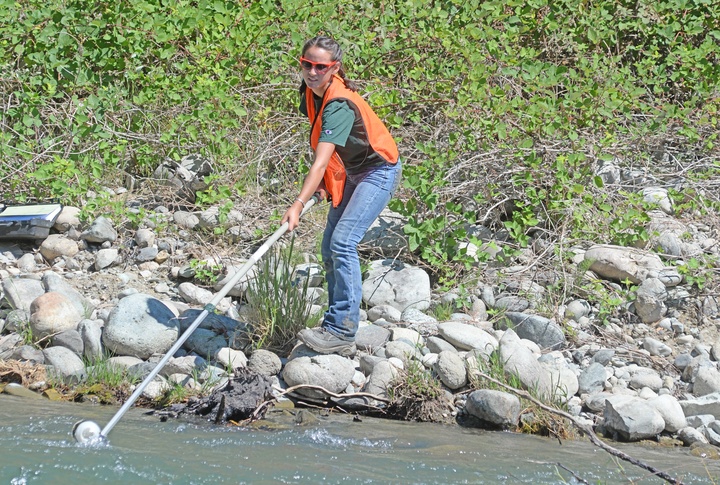 Yurok intern Dara Gaeuman takes water sample below the job site to measure sediment input into the river. If the sediment threshold is met, all works comes to a halt until the water clears up. | Photo by Matt Mais, Yurok Tribe.

The Trinity River, the Klamath River’s largest tributary, was completely altered after the erection of two dams in 1956 and 1963. More than half of the Trinity River above Lewiston Dam is currently shipped to the Central Valley for power production, agricultural, and domestic uses. For the first few decades following dam construction up to 90% of the water was sent to the Central Valley. More than a half a century of reduced flows has caused the river to lose numerous components of a natural/healthy river that previously supported substantial runs of salmon and steelhead.The Trinity River Restoration Program’s focus is to restore salmon population abundance through flow management, and restoration of habitat in the upper 40 miles of the Trinity, as well as in tributaries.

The combined restoration team used cutting-edge technology and heavy equipment to create the natural features, such as beaver dams, split channels and large wood jams, found on intact river systems. The Yurok crew sculpted a cascading side channel that delivers water into an impressive wetland, which spills back into the main-stem of the river. New alcoves, low flow channels, floodplains, and gravel bars were strategically placed along the central part of the river. These interconnected elements serve salmon and steelhead throughout three crucial stages of the fishes’ lifecycle: egg incubation, rearing and reproduction. They also produce the diverse dynamics, including varying water flow, increased ground water storage, and a broader range of temperature regimes, encompassed in a pristine riverine ecosystem.

The river flows for an approximate total of one mile through the horseshoe-shaped Bucktail site. Before the project started, the gap in the middle of the crescent contour was filled with refuse from an old mining operation. The flow velocity and temperature of this section of river, much like most of the present-day Trinity River, was nearly homogenous. Now, it contains diverse habitat conditions, including thermal and flow gradients needed for it to become a biodiverse ecosystem. In other words, the stage is set for the formation of a broadly populated, self-sustaining food chain — the hallmark of healthy fish habitat. To speed up this natural process, the Hoopa Valley Tribe’s Fishery Department will be planting numerous native plants after the heavy machinery work concludes. 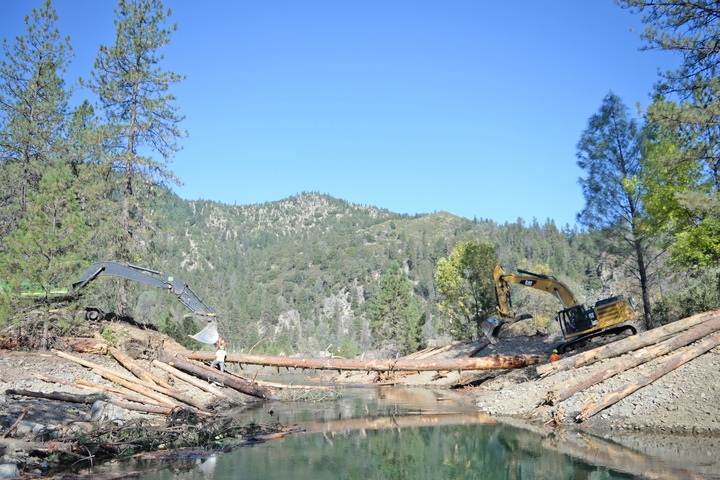 All of these attributes were designed, over a period of three years, to function during a wide set of circumstances, ranging from a drought to a 100-year flood event. To fine-tune in the new fish habitats, Yurok Fisheries biologists used a real-time kinematic device, or RTK. An RTK is basically an extremely accurate GPS that can be programmed with the design plans of a restoration project. This highly sophisticated instrument has the capacity to show the operator exactly how deep to cut a channel, so that it performs under the ever changing conditions on the river. The digital tool can also be employed to dial in the depth a wetland and for many other purposes. The RTK enables watershed restorationists to be more efficient, and complete significantly more work in a shorter period of time.

Each of the restoration attributes installed on the Bucktail project have undergone rigorous scientific research and are proven to produce specific benefits for native salmon and steelhead. The fortified beaver dams and large wood jams provide places for juvenile fish to hide from high flows and protection from predation. The purposefully positioned stores of course gravel will gradually deliver substrate, during high water events, to established spawning beds, and cause geomorphic evolution of the physical habitats. The alcoves and wetlands will produce a buffet of bugs for baby fish to feast on, as well as provide refuge from high velocity areas during high flow events.

While the primary goal of the project is to improve salmon and steelhead habitat, many of the fish-friendly features simultaneously benefit migratory waterfowl and other birds, as well as resident mammals and amphibians. For example, the mallards and geese that frequent the Trinity each fall will use the wetlands to rest and feed. The US EPA calls wetlands, the foundation of many cold-blooded vertebrate, plant and bird populations, one of “the most productive ecosystems in the world.” More than 90 percent of all wetlands, in California have been destroyed due to dams, housing encroachment and farms, according to NOAA. In addition to salmon and steelhead, Tribal biologists believe there is no doubt the new marsh will soon be occupied by Western pond turtles, yellow-legged frogs and myriad other native creatures.

On a recent morning, in the three-day old wetland at Bucktail, songbirds stood on logs — put in place by Roger Boulby — protruding from the water, while migrating Canadian geese honked as they passed overhead. A doe and her two fawns sipped from the edge of the cool, clear water. From the deer’s vantage, those adult salmon could be seen spawning in the current. It was easy to imagine, great blue herons, bald eagles and many other animals making a future appearance at this biological oasis. 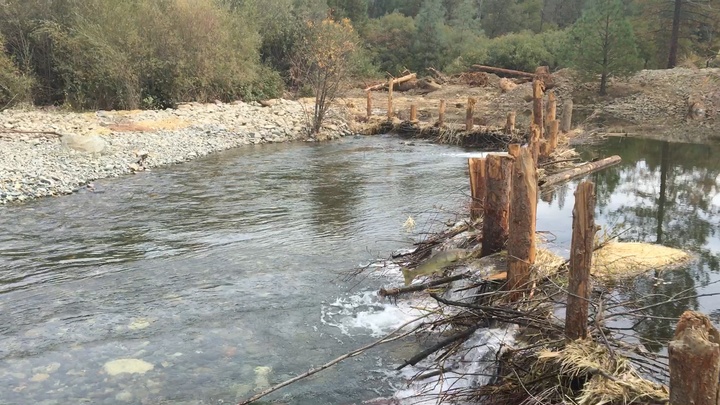