RAIN! SNOW! WIND! We Now Return You to Your Regularly Scheduled Winter 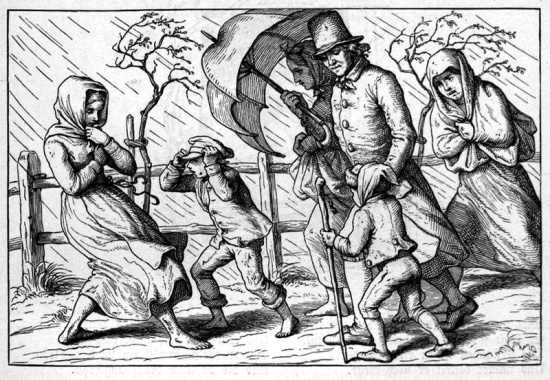 A nobleman teaches his child about the imprudence of the lower classes, who once again failed to purchase shoes and umbrellas before the storm struck.

Have you enjoyed your last couple of days of dryness? Your Lost Coast Outpost has! We were up in the North Coast Interior regions yesterday, enjoying a high of 82 degrees and wondering what became of the notion that this was going to be an El Niño water-dumping winter for the ages.

Well, tomorrow Humboldt gets back on track. A cold, wet front is now scheduled to hit Humboldt tomorrow around midday, bringing snow down to perhaps 3,000 feet and dumping a good amount of water onto the lowlands. That’ll be followed by another little bundle of weather, the National Weather Service predicts, and then another, so that everything should be mostly chilly and soggy until at least Monday.

A Winter Weather Advisory has just been issued for the mountains, warning of snow accumulation. It includes a caution to motorists who may be traveling high mountain passes, including Berry Summit:

THE NATIONAL WEATHER SERVICE IN EUREKA HAS ISSUED A WINTER WEATHER ADVISORY FOR SNOW…WHICH IS IN EFFECT FROM 7 PM WEDNESDAY TO 4 PM PST THURSDAY.

The storm will be heralded by strong, gusty winds that will start blowing tonight. Mariners, note that there is a small craft advisory in effect.

We at the Outpost will be keeping a close eye on power outages, road conditions and the like. Send us your weather photos, people! See you tomorrow! 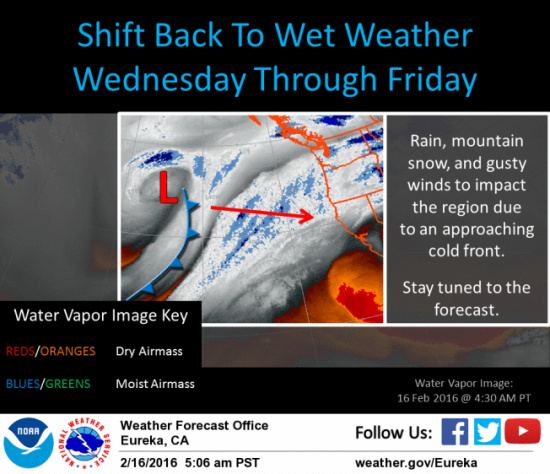